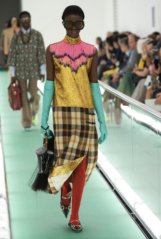 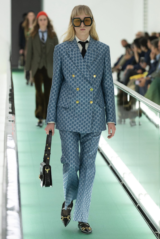 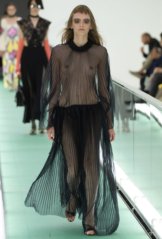 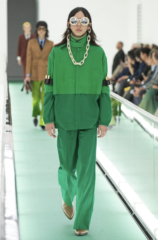 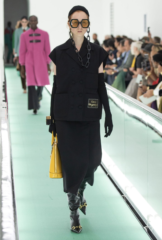 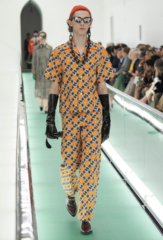 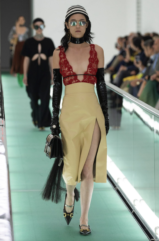 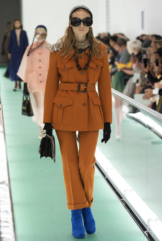 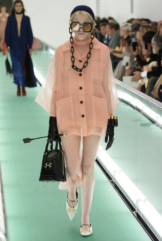 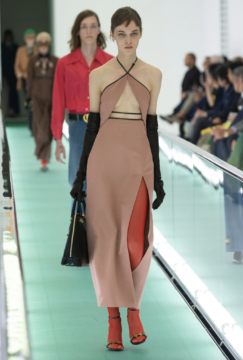 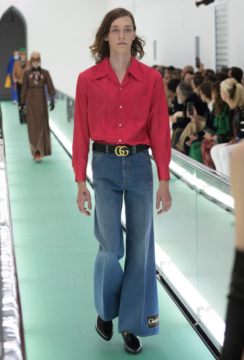 We entered the room bathed in red light, at least this time I had no trouble finding my seat. When the show started it was a blast of white light and for me, a flash of Quentin Tarantino’s Jackie Brown with Models in constricted white jackets entered on a conveyor belt like in an airport. The opening series was a performance of a not for sale group of clinical utilitarian work clothes  restricting movement in a way that  expressed the constraints of society on those who choose to freely express themselves. “A uniform is something that blocks and constrains you, that makes you anonymous. That makes you follow the direction of travel.” said Alessandro Michele after the show. The straitjacket, he said was “the highest type of uniform”. The show notes referenced Michel Foucault, “biopolitics” and “the ‘microphysics of powers’ that molecularly operates inside society..a power that legitimises only some existences, confining the others inside a regime of containment and/or visibility”. After the intense blast of white light the room went dark and the main collection showed a new dimension of the Michele’s streamlined approach to fashion and his play with the codes of the house and also Gucci’s first carbon-neutral show, with attendants’ carbon dioxide emissions offset and the set to be reused in shops. Gucci has also promised to become an entirely carbon-neutral company. Its CEO, Marco Bizzarri is said to be re-thinking fashion shows altogether.

The show notes read “Our present, instead, is shaped by a “microphysics of powers” that molecularly operates inside society: a form of extensive govermentality that, through a set of institutions, devices and mechanisms of subjugation, imposes behavioural rules internalized by the individuals. Such powers operate everyday through blocks and bans, they prevent the free circulation of discourses and end up creating a disciplinary society: a society that controls, confines and regulates life.”

So off with those controls and remove the straight jackets and be yourself, no rules.  There were the romantic, sexy, fetish looks, with amazingly sexy latex opera gloves and thigh high boots.  The 1970’s trouser looks a la Dapper Dan meets Boogie Nights merged with the 70’s DNA of the brand complete with the monogramed shoes. On option were Uniforms and work wear and an amazing array of the strongest eyewear seen on the catwalk so far this season complete with oversize chains. It was both streamlined and passionate. Romantic and utilitarian, retro and modern and of course glamour but not overly decorative. The  decisive message was that the function of fashion is to let people cultivate their own ideas of beauty and self determination. I’m all for that.