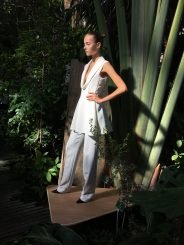 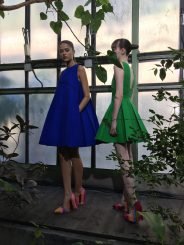 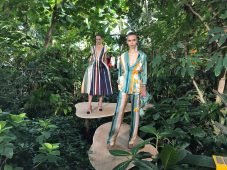 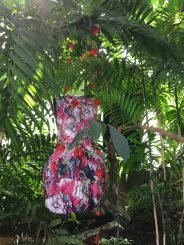 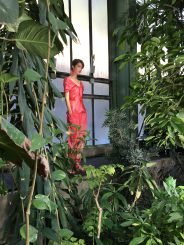 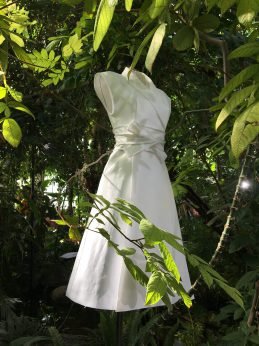 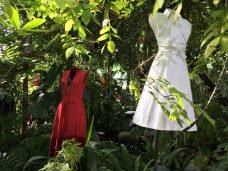 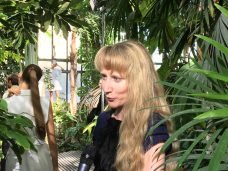 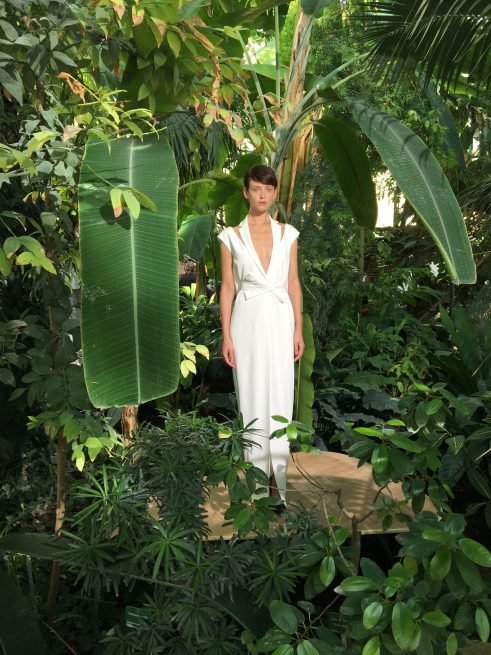 “When I first got to Japan, I was taken aback by the rigidity of everything, from manners to architecture, to the shape of lettering on signage. But this initial impression soon gave way to the discovery of the poetry, the kindness of its people and that behind every door hides a beautiful garden” recalled Alithia Spuri-Zampetti, creative director of Paule Ka, during her sophmore presentation for the house in the Grandes Serres of the Jardin des Plantes where models dressed in her latest designs played hide-and-seek like so many birds of paradise.

Her work started with the kind of feminine tailoring that made the Paula Ka name over three decades ago, when former AD Serge Cajfinger first established the brand. Particularly handsome were the blazers and the dresses that found their origins in traditional Japanese garments – kimono and monastic finery in particular – cut from crisp fabrics and finished with unmistakable collar cuts and obi-like belts. As guests progressed through the dense foliage, so did the collection, moving to pleating and then to jolie madame dresses, including very full-skirted dresses in which the influence of the Land of the Rising Sun was evident.
Flora started to creep into these pure lines, along with jewelry designed by Belgian brand Moutton Collet. The patterns, which were reminiscent of the decorated insides of kimonos (particularly those from the 1920s, pointed out Spuri-Zampetti) came to life as raw-edged jacquards with a garnish of handcut petals before the work of this former first assistant to Alber Elbaz took flight – as gradient gowns in shades that segued perfectly into the watery surface of the pond they trailed into – as guests clambered into a man-made grotto which afforded a bird’s eye view on the designer’s work. Cliff notes: Paule Ka is well on its way to reclaiming its place as a Parisian staple.
Another sign: at the exit stood an immaculate, stately and alluring white suit, with a distinctive cut out slicing to bear the clavicles. A clean slate, but already marked with the promise of things to come.