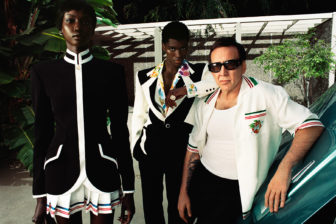 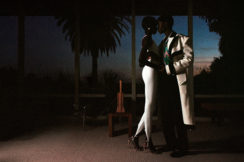 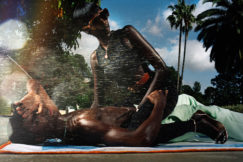 Creating an image has so much to do with the choice of photographer and the casting this is where Charaf Tajer, the Creative director of his brand Casablanca, hit home with choosing Parisian photographer Hugo Comte and an excellent casting with the iconic Hollywood actor Nicolas Cage alongside Alton Mason and Anok Yai.

Recently the iconic Hollywood actor Nicolas Cage purchased a Casablanca shirt at the Maxfield LA pop-up store and developed a true love and understanding of the brand. Creative director Charaf Tajer was keen to find someone who could embrace his artistic values, while reaching a wide range of people. Someone universally iconic. Nicolas Cage was a natural fit.

“Los Angeles is an important city for me, and I wanted to create a Hollywood moment between models I love, like Alton [Mason], who is a dear friend of mine, and Anok [Yai], who I truly love and think is one of the most beautiful women in the world. Then there’s the icon that is Nicolas Cage. Hugo and I are also good friends and we’ve wanted to work together for a long time, so this felt like the perfect time and place to do it.”
– Charaf Tajer, Creative Director

The creative concept was inspired by the early paintings of American artist Eric Fischl and was shot in Los Angeles, California. The imagery specifically speaks to the American pursuit of dreams in a hedonistic, satirical manner. The casting is the perfect accompaniment, using fashion stalwarts alongside long lasting lead actor Nicolas Cage, famous for cult movies such as David Lynch’s ‘Wild at Heart’.

“We revisited the Hollywood heritage with our own life stories, mixing opulence and romance to create timeless images out of the fashion scope, with a universal vocabulary of pop culture.”
– Hugo Comte, Photographer

The brand’s iconography and inimitable artistic identity draws from its three main pillars of architecture, nature, and travel – which each serve as the concept’s core foundation. A distinctive use of colour and composition convey Casablanca’s strong visuals. From this starting point, drawing upon the artwork of Eric Fischl was a natural part of the creative journey. Hugo Comte’s work merges cinematography, architecture and fashion; a creative approach that mirrors the ideology of the Casablanca brand, resulting in these three elements becoming central reference points for the shoot.

Casablanca is a contemporary luxury fashion house dedicated to protecting and promoting a holistic approach to design and craftsmanship. By collaborating with artisans the world over, in a bid to redefine notions of beauty for a new generation, Casablanca’s uncompromising dedication towards optimism and design excellence has led the Parisian house to be carried in over 300 of the world’s most prestigious stores and boutiques.

Since launching in 2018, Casablanca has shown seven collections with La Federation de le Mode’s Paris Fashion Week, and won the highly-coveted LVMH prize, as well as a listed finalist for both the International Woolmark Prize and ANDAM Fashion Award.