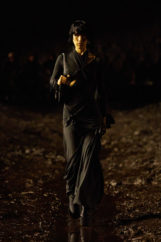 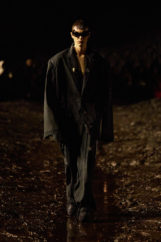 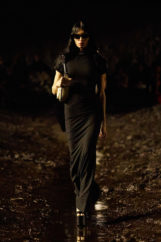 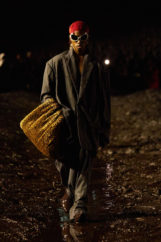 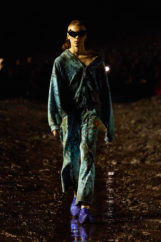 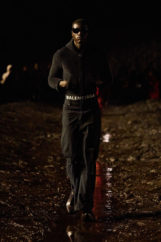 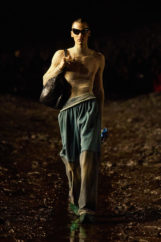 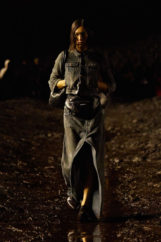 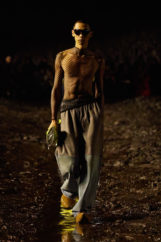 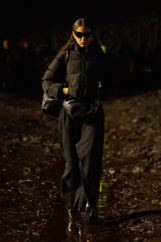 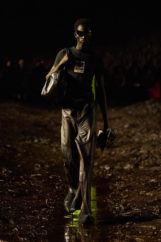 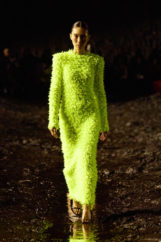 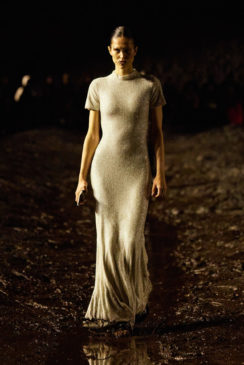 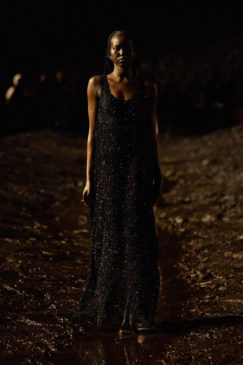 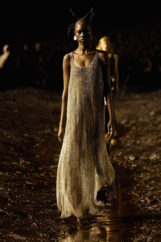 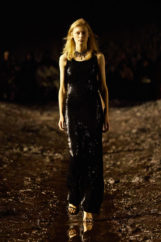 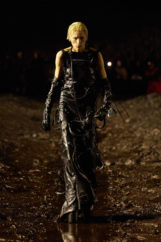 As I write this I can still smell the earth that surrounded the mud installation designed by the artist Santiago Sierra. There was something in the dirt, molecules with anti-depressant, now who but Demna would have thought of that?  When you are present at the show, and I can only speak for the two that I attended,  you see more than clothes, all of your senses are considered, it is what you see, what you smell, what you feel. For what you feel obviously Demna is strongly effected by the war in Ukraine and joined forces with President Zelensky to raise funds for Ukraine and was awarded the Order of Merit of the third degree for personal services in strengthening interstate cooperation, for support of state sovereignty and for helping to promote the state of Ukraine in the world.

With his last show we saw models walking through blowing snow carrying their belongings in what looked like trash bags. Now the snow has melted, the earth has turned to mud and the war continues. Models walked along the track of the mud cavern dragging their long skirts and trousers through it along the way. Now that you understand the atmosphere let’s think about the clothes. My favourites were the jeans trouser/skirts that were oversized and looked aged and dirty and also very sexy. Today I actually went to the showroom to get a closer look at the pieces. Some of the jeans were aged, shredded in ladder like bits on the back side and cut to perfection.

Ye opened the show in a military inspired puffer security jacket with multiple pockets and hardware wearing a hat and a beard and I have to say I did not even know it was him.

The show notes read: “the challenge is to get up and keep walking towards your true self after you have been beaten up and knocked down.”

“I’ve decided to no longer explain my collections and verbalise my designs, but to express a state of mind. Fashion is a visual art and all we need is for it to be seen through someone’s eyes. Fashion in its best case scenario should not need a story to be sold to someone. You either like it or not.

The set of this show is a metaphor for digging for truth and being down to earth. Let us let everyone be anyone and make love not war.” said Demna.

Other looks that had been aged were the graffiti printed pieces, one in particular caught my eye, it was blood red with a hardware long chain. On their feet they wore clogs, some in patent leather, some with rhinestones. Demna played with volumes sometimes close to the body on top and oversized on the bottom. One example was the slim yellow puffer jacket paired with oversized trousers. Sometimes tops were skinny and made out of fishnet. Stepping outside of the military and worn looks were beautiful long dresses fit for the red carpet. My favourite dress was in bubble gum pink and it is slashed and tied and super sexy.

Near the end there was a hard core black leather dress made out of leather bags and  sewn together bib top like an overall and ornamented with hardware. That look would fit perfectly in a Kenneth Anger film. Lets talk about the bags, the bag of the season, aside from the shopping bags, had to be the one that covered your arm which then became a part of the bag. then there were soft bags, old battered and worn out teddybears that could be worn as accessories, I would love to have one…and the chips bag and…the great array of sunglasses. I loved the Bat Woman ones with the curved lens and also the re-interpretation of cat eye frames.

“One needs to have courage and persistence to truly assume their identity and who they really are. Every day becomes a battlefield to defend this unique identity. And the more you try to be yourself the more you get punched in your face. But how great it is to be different from one another.”

Demna sees the future, he saw it last season with the war, then the stock exchange and now as we live these muddy times. He has no problem keeping his own identity and strongly suggests you keep yours too.