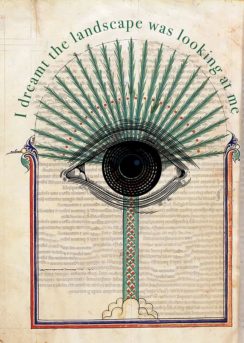 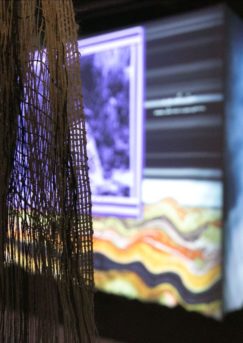 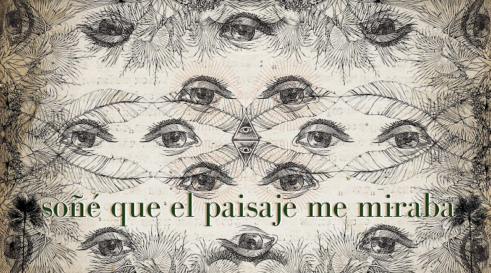 I Dreamt The Landscape Was Looking At Me is a multichannel video installation projected on three screens and developed as a unique hallucinogenic loop divided into three chapters.

Mitrani deftly twists a kaleidoscope with images filmed at her parents´ house in Chía, including her singing to the horses; detaching her hair with her hands while burying it near a quartz; parts of Jan Cornelis Mol’s From the realm of crystals itálics (1927), a scientific Dutch film that shows the crystallization processes of various chemicals. Mitrani alternated these post-produced images with new animations, like walking palm trees on the beach and breathing rocks.

The visitor passes through a threshold of fique to enter the space, which is made following the traditional ancestral indigenous technique. It is created by Judith Torres Solís + Handcraft group Kunsamu. This visual device emphasizes entering into a new dimension while acknowledging that MAMBO is built on a Muisca territory.

Jessica Mitrani is a Colombian artist that lives in New York working with performance and video. Her work has been exhibited, screened and broadcasted internationally. Over the years, Mitrani has developed a unique video-graphic approach that employs narrative, humour, and psychoanalytic tropes expressed in a range of emotions. Her work recontextualizes quotidian gestures, scenes, and objects in an oneiric realm from the excessive to the absurd or melodramatic.

¡Visit the Museum – MAMBO!
The exhibitions are open to the public until the 1st. of August in the Museum of Modern Art of Bogotá-MAMBO.Bogotá, Colombia. Calle 24 #6-00