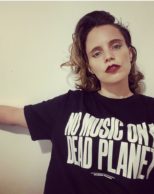 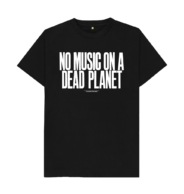 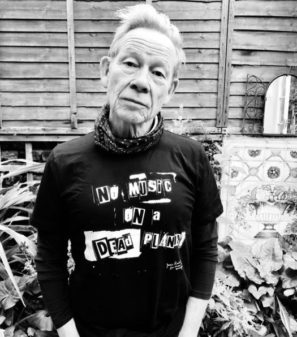 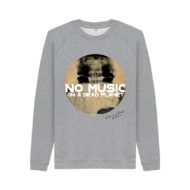 Music Declares Emergency’s No Music on a Dead Planet” alongside 3474 Organisations, Artists & Individuals including- Thom Yorke, Stanley Donwood, Jamie Reid + Paul Cook, and Anthony Burrill in their quest to get the global music industry professionals and organisations to stand together and communicate a climate and ecological emergency and call for immediate government response to protect all life on earth!
Thom York and Stanley Donwood have become the latest guest designers to join Music Declares Emergency’s ‘No Music On A Dead Planet’ T-shirt range with an exclusive design that launches this Friday 4th December via the MDE shop at https://musicdeclares.teemill.com/. Stanley’s relationship with Thom dates back to 1994 and the pair have worked alongside each other throughout Radiohead and Thom’s recording careers, creating the artwork that is familiar to millions.
The series launched with a design from the Don graphic artist and print maker – Anthony Burrill, capturing his trademark directness in a bold print. A second design, from punk legend Jamie Reid (best known for his cover of the Sex Pistol’s album design) “Never Mind the Bollocks Here’s the Sex Pistols” deployed his instantly recognisable newsprint ransom note to take the slogan in a markedly different, yet equally effective, direction.
All the T’s are made from organic cotton and are printed in the UK in a renewable energy powered factory and funds go to the campaign/charity Music Declares. The designs are the latest in a series of ongoing collaborations with artists, musicians, and designers in support of MDE and its call to action.
Music Declares Emergency is an independent group created by music business executives and artists concerned at the lack of a cohesive, industry wide response to the climate emergency. In July of 2019 it organised an industry wide declaration of Climate and Ecological Emergency signed by leading artists and businesses within the UK music industry, calling for net zero greenhouse gas emissions by 2030 and pledging industry action on environmental sustainability. It believes that the music community can drive forward public understanding and pressure government to take immediate action on climate and biodiversity loss.
Music Declares a Climate and Ecological Emergency.