Young designer Patrick de Pádua tapped into many of the season’s key trends -the main one being transparency- with his confident menswear show. Fabrics were lightweight and innovative, from shiny nylon and airy mesh to what looked like clear rubber, conjuring up a rather fetishy version of urban athleticism. There were several pieces to covet, from fitted tracksuits and baggy shorts to sheer separates and embellished sweatshirts. Despite being truly rooted within masculine codes, the designer showed a playful side with his use of pink, either on accessories, such a fluffy bum bag, or garments themselves, adding softness to an otherwise black and white lineup. Patrick de Pádua keeps evolving and coming up with desirable clothes each season. It was a precise, intelligent and unpretentious statement. 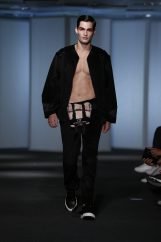 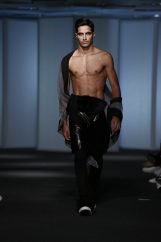