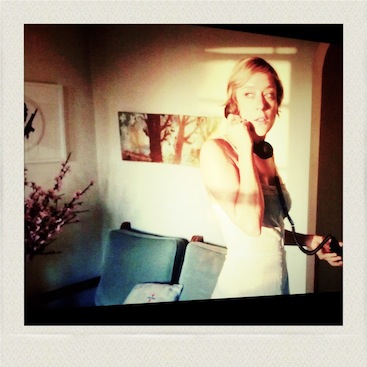 about LA. Look out for the flyer for the Urs Fischer Gala at MOCA

prominently visible in the opening of the film.

Magic Hour is about isolation versus intimacy. Grey (Chloe Sevigny) is

married and living in a home that is bathed in beauty and warmth. But,

she is imprisoned by her own isolation. Los Angeles reinforces and

adds to her stagnation, but the inability to connect lives inside of

her. Her isolation is such that she can only open up to her husband

when they are separated by a telephone. The reveal of this short

vignette is that her husband has been right outside, on the other side

of the wall, the whole time and she knows it.