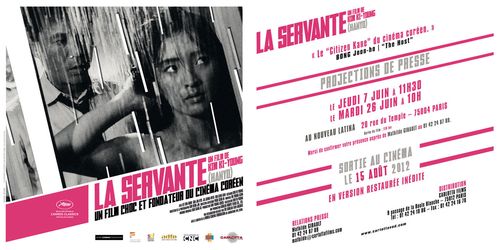 I love this film. It is about a family that moves into a large new house. The father, Dong-sik teaches music in a factory for women. His wife is suffering from fatigue and in order to relieve her a bit he agrees to host a servant that was recommended to him by one of the young workers that he gives private lessons to. There is some ambiguous behavior and the newcomer likes to spy on conversations or frighten his children. When she starts a relationship with Dong-sik, the focus falls slowly under the influence of the servant. It is totally different from Joseph Losey's film The Servant but there are some similarities and it is extremely powerful and disturbing.