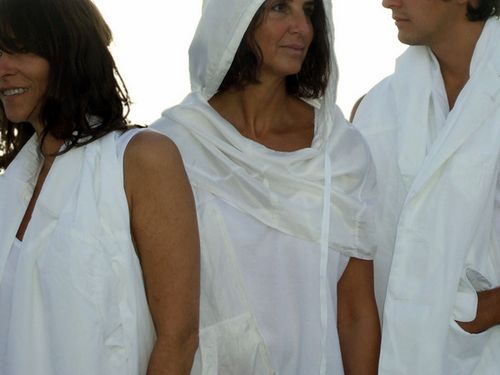 A regular fixture on the Antwerp scene, Peter Ceursters is a fun-loving guy, with a great sense of humour and talent for languages. My Dutch being rather nonexistent, he was one of the first people I could actually talk to at events and openings. We met at the MoMu in Antwerp and kept bumping into each other. I found out he was managing the Acne store and designing a collection of scarves, which I was curious about. Scarves are one of my sartorial obsessions and I keep on buying them in all kinds of shapes, colours and fabrics.

Peter's collection happened by chance and the one thing that triggered it was love. Scarves are intimate objects, which are worn close to the face. They offer warmth, comfort and style. I love how versatile they can be. In Peter's case, scarves can be envisaged as transitional objects. They are clothes morphing into accessories. They deal with memories, hope and longing. His pieces are soft, delicate and beautifully crafted. I was happy to know Haleluja stocks them in Brussels. Each one has a specific story, relating to a moment in his life. Peter's sensitivity and attention to detail are visible in each thread. Why did you decide to focus on scarves?

It just happened, I guess. It was all about love.

I fell in love with someone I met in Berlin while I was on holiday there and the relationship was really special. I used to buy him presents and he was very annoyed when I did that, because he was a student and couldn't reciprocate. When Christmas came, I decided to make something for him instead of getting another gift. I took a shirt I had been wearing for years, deconstructed it, lined it with silk and sent it to him. That was the first scarf I ever made and how it all started.

Did you use to design before?

Yes, I designed a collection called "Fragma", which was sold in the store that bore the same name. It was a great adventure for me, as well as a combination of retail and design, which I really liked. The store was located in Antwerp and lasted six years. It carried a mix of international designers, such as Givenchy, Calvin Klein and Hussein Chalayan. I was buying the collections as well.

Sounds like a lot going on for one person.

Well, it was pretty much 24/7 and I did it for 5 years. We had one foreign investor who gave me a lot of freedom to do what I wanted. It was a great experience for me and I had the opportunity to learn a lot there. Towards the end, I actually spent a lot more time in the atelier than at the store. I found out a lot of about production and how the business works.

I guess that must have helped you with the scarves.

Yes, of course. I put a lot of myself into them and it can be emotional. I often work with old garments, as I like the idea of having a one-off piece. It's also something you can pass on to someone, there's a narrative attached to it. 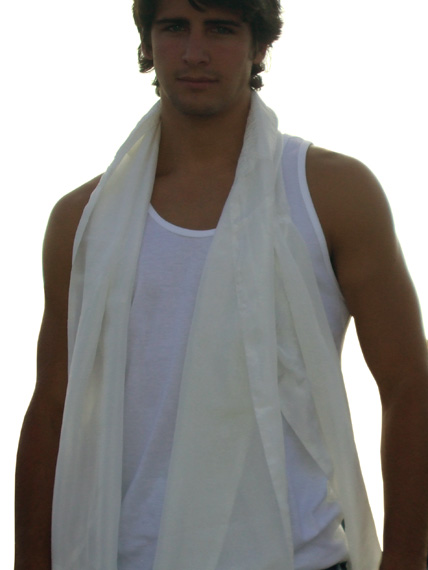 Do you wear scarves?

I used to wear them a lot, but now I don't (mutual laughter). At the beginning, I only had upcycled materials, but now there is an atelier working with us. I do the samples, which get produced there. Some of them are made in Belgium, others in India.

What was the concept for your last collection?

It was about letting go. When I think back about the relationship we had, I began to realize how different we actually were. I learnt to love someone, but not necessarily wanting to be with that person. That's what the collection is about. He will always be a part of my life, but things can be complicated. I also went to New York with FFI and felt so much freedom there. I wanted to translate that feeling into some of my pieces, which had to be light and easy. I used a lot of white, too.

I guess it's very difficult finding someone who shares similar expectations and desires in life. There's often a gap, which can create tensions and misunderstandings. Then again, it could be what relationships are all about.

You cannot plan love. That's just the way it is. I wasn't looking for a relationship at that time and fell in love. We both moved on, but he'll always be in my heart. That's how I do my work, too. I just cannot design without any emotions there. I have to feel something or it makes no sense. I line my scarves with silk, because it's a luxury and gives you that great sensation when you wear them.

I love the way scarves can show your individuality and what your taste is. They're like a strong accent complementing the clothes.

Exactly. Scarves deal with care and protection. They're personal for me.