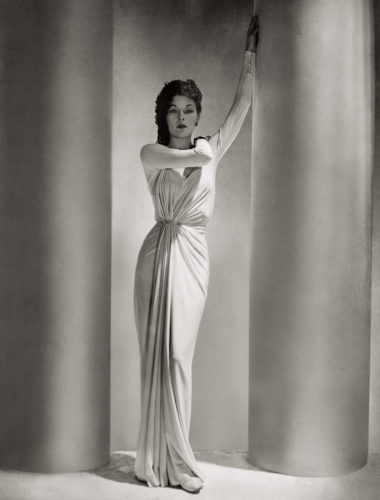 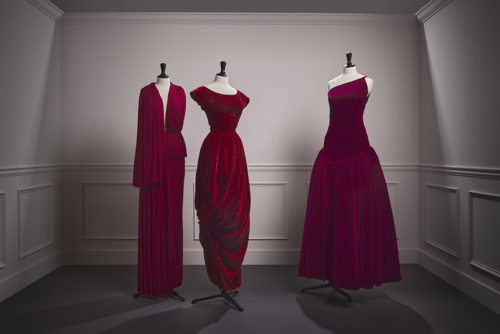 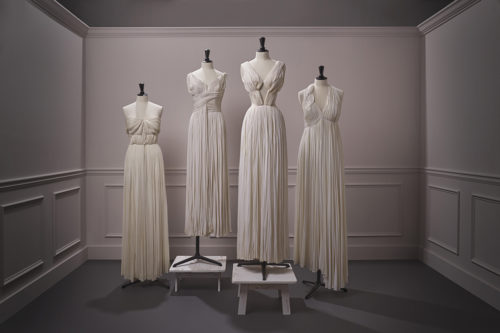 Both silent and secretive, determined to the point of spending her entire life in the solitude of the atelier, Madame Grès aspired to be a sculptor and did undoubtedly become the greatest sculptor of all the fashion designers of her era. Across five decades, from the 1930s to the 1970s, she persisted, with monastic dedication, in building a body of work that transcended the fleeting fashions she viewed with contempt. Claiming to wear out up to three pairs of scissors for each of her collections, she invented her craft through the use and re-use of draping, raising it to the level of an art form.

“I have nothing to say and everything to show. All I do is work, work, work. When I’m not sleeping, I’m cutting. That’s my life.” This statement, like others recorded by biographers or journalists taken aback by how little Madame Grès revealed of herself, could have also quite naturally been the confession of fashion designer Azzedine Alaïa. The presence of a large number of Madame Grès’ works in Alaïa’s archival collections attests to the passion he had for her, with whom he shared a gift for the sculpting of fabrics and forms. More than 600 haute couture designs, and as many photographs, are held in these collections alongside the masters of high fashion — Cristóbal Balenciaga, Charles James, Madeleine Vionnet, Elsa Schiaparelli, Coco Chanel, and Jean Patou, among others — whose works Alaïa, as an enlightened archivist and historian, collected and which now form the precious core of the Azzedine Alaïa Foundation.

In The Art of Draping, nearly 80 garments by Madame Grès from Alaïa’s unique collections are presented to the public for the first time. The designs on view — which date from the 1930s, when Madame Grès was creating under the name Alix, to the 1970s, when her timeless creations were still the peak of modernity amid ever newer generations of designers who arrived on the scene — include her celebrated draped “Antique” gowns, which have continued to bring her renown and glory in the many decades since.

The exhibition begins with a selection of Madame Grès’ white, ivory, and chalk designs that reveal the Hellenic majesty of her draping. A set of draped black designs, as well as designs with cut volumes, likewise demonstrate the timeless nature of her creations and the persistence of her style, which became a kind of personal writing. “I never create a dress from sketches. I drape the fabric on a model, then I study its nature thoroughly, and that’s when I pick up my scissors.” Able to produce infinite variations through her craft, Madame Grès did not just excel in draping. In the 1950s, she was also unequaled in her skill with taffeta and woolen fabrics. Her short cocktail dresses, oblique and profiled, and her fluid day gowns sparkle in all their lightness. Her adeptness at simple forms and the cutting solutions and methods to achieve them, elevated to the level of aesthetic principles, can also be seen in her evening ensembles with their savvily cut volumes and generous dimensions, which bear witness to the designer’s taste for traditional clothing with flat-pattern cutting.

Particularly gifted in subdued and muted tones, Madame Grès was also an inventive colorist with her own vocabulary. Cleverly staged as if within an intimate theater, selected designs from various decades — in hues of reddish brown, chestnut, cinnamon, hyacinth, taupe, tortoise shell, bronze, verdigris, almond green, redcurrant, sunny yellow, all shades of beige, off-whites, and deep blacks — create a chromatic harmony that serves her art, presented in all its jewel-like grandeur.

The Art of Draping is curated by fashion historian and curator Olivier Saillard and organized by Rafael Gomes, creative director of SCAD FASH museums.

Born Germaine Krebs, Madame Grès (French, 1903–1993) began working in the 1930s. In 1933, on the Rue de Miromesnil in Paris, she partnered with couturiere Julie Barton to open Maison Alix Barton, which later became Maison Alix in 1934, on the Rue du Faubourg-Saint-Honoré. She quickly found success with her designs, which evoke ancient statuary through her signature draping technique perfectly adapted to modern life. In 1942, she founded Maison Grès, and set up showrooms and workshops in the heart of Paris, at 1 Rue de la Paix. Her famous clients included Greta Garbo, Marlene Dietrich, Maria Casares, and Grace Kelly.