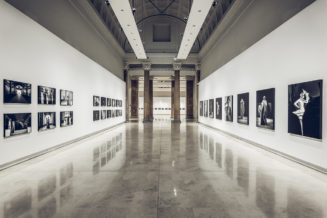 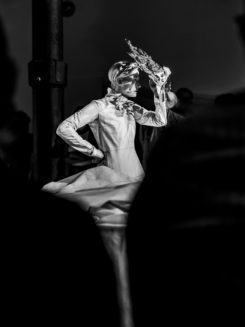 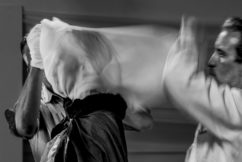 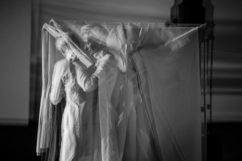 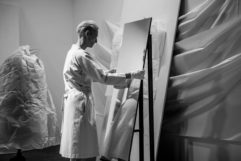 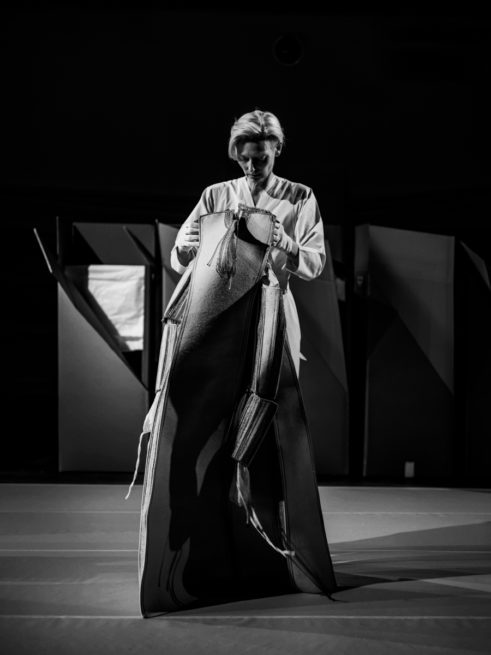 I did not want to miss this one as the photographer Ruediger Glatz is a friend and all our mutual friends were in Rome celebrating him. Glatz has been collaborating since 2012 with Tilda Swinton and Olivier Saillard. Through his lens he has documented performance projects such as The Impossible Wardrobe or Cloakroom or the very recent Embodying Pasolini.

Reflecting Pasolini exhibition starts from the unpublished images of Tilda Swinton’s extraordinary interpretation and continues with the ON PPP project: over 60 black and white images trace a path through the sense of absence, in an itinerary between places, objects, situations and memories particularly dear to Pier Paolo Pasolini, of whom we celebrate the centenary on this year.

The exhibition, promoted by Roma Culture and organised by the Azienda Speciale Palaexpo, is part of the Rome Capital City Cultural Affairs Department’s PPP1000 programme of events coordinated with the Cultural Activities Department curated by Alessio de’Navasques.

Adopting a clinical, almost scientific approach that in many ways echoes the German photographic tradition known as Subjektive Photographie, the artist encounters the great Italian thinker in a process of rapprochement, refraction and reflection. The ineffable quality of a solitary fate – a recurrent theme in Pasolini’s work – the sense of absence palpable in certain places, objects, situations and memories, the nostaglia for the people who have lived in those spaces, the presences that have physically inhabited them only to them leave them empty – all of this has generated a personal and unique vision of the poet through the artist’s images.

Ruediger Glatz first recorded the strength of absence in a performance entitled Embodying Pasolini whose worldwide pre-premiere was held at the Mattatoio in Rome in June 2021, in which internationally renowned actress Tilda Swinton, who won the Golden Lion Lifetime Achievement Award in 2020, and curator and fashion historian Olivier Saillard explored, through the sculptural monumentality of Danilo Donati’s costumes, the memory of Pasolini’s characters who had worn them. Under Saillard’s guiding hand, Swinton, with her physique at once diaphanous yet strong, sought in the holes in the fabric, in the void of the folds of these inanimate objects, in their perception both material and immaterial, the very essence of Pasolini’s cinema, giving a performance of vibrant emotional expansion. In the exhibition at the Palazzo delle Esposizioni a complete cycle of photographs conjures up the performance experience in the Mattatoio as thought it were a “time room” where Glatz’s lens has managed to capture the magnetism of the action. Through the use of extended or multiple exposures, he uses doubles and reflections to convey the transfiguration of the actress in the pathos of her peformance. The light precisely impresses the reflection of a “personification” that touches not only the various characters but also Pasolini himself.

The moment of the action and Swinton’s own enigmatic face become a reflecting device, a punctum that fertilises the photographer’s creativity, triggering a process of exploration and familiarisation with Pasolini’s work as a reflection and refraction of that action. Whence the exhibition title Reflecting Pasolini and the idea for the project, which is completed with the images of the places that Ruediger Glatz encountered while touring Italy in search of Pier Paolo Pasolini’s imagination. Thus the cycle of photographs entitled On PPP rebuilds this emotional journey, juxtaposing the past with the present, in Pasolini’s relationship with the city of Rome, documenting the changes but also the unchanged magic of certain borders and now legendary suburbs.

Almost as though he wished to fill this sense of void, Glatz has imparted new depiction and new meaning to the references to the painting of Piero Della Francesca and Giotto in The Gospel According to Matthew, to the lights of the buildings in the Quadraro and Centocelle in such films as Mamma Roma or Accattone (The Procurer), or the shadows of Villa Feltrinelli, Mussolini’s last abode on the shores of Lake Como that inspired Salò. The essence of the sites, of the solitary landscapes, of nature-culture, like denaturalised spaces, has spawned a personal atlas of myths and emotions in an intimate and literary dimension of such places as the house in Bologna where the poet was born or the Torre di Chia, the beloved retreat where he wrote Petrolio.

Born in Heidelberg, Germany, in 1975, Ruediger Glatz developed an interest in photography as a form of artistic expression in 2000, after having previously been an active graffiti writer. Setting out from this most traditional form of documentation, he proceeded to develop his own personal idea of photography as a conceptual portrait, photographing almost exclusively in black and white and using extended and mutiple exposure to emphasise his vision through the flow of time.

Since 2009 he has been working a project entitled The New Black, conceived as a portrait of the world of fashion. In that context, since 2012 his lens has recorded all the performance projects devised and developed by curator and fashion historian Olivier Saillard with the performer Tilda Swinton: The Impossible Wardrobe, Eternity Dress (2013), Cloakroom (2014), Sur-Exposition with Charlotte Rampling (2016) and Embodying Pasolini (2021–2).

He has been living and working in Hamburg since 2014.