Acne Studios has opened the doors of its new flagship store in Rue Saint Honoré, Paris.

Monolithic, minimalist and sleek, the inspiration behind the concept came from Acne’s founder and creative director Jonny Johansson. After spending time in the Rålis Skatepark in Stockholm, Johansson was captivated by the underground feeling the skate park structure gave and wanted to capture the same sense of secrecy and mystery with his new flagship store.

As if hidden in an underground, away from the eyes, Johansson wanted to evoke the feeling of belonging to a secret society, an underground venture of sorts. To fuse his references from Stockholm with the architectural richness of Paris, he tapped to Barcelona-based studio Architectura-G.

The starting point for the store began with the Saint Maximin stone, “a golden coloured limestone definitive of traditional Parisian architecture” spreading out to clads walls, floors, and columns, moving from the interior to the exterior. To soften the harshness of the stone and to add a three-dimensional element, Acne brought long-time collaborators British designer Max Lamb for soft furnishings and French artists Benoit Lalloz for the orbiting rectangular lights. 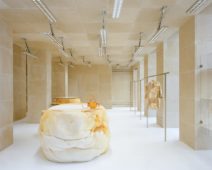 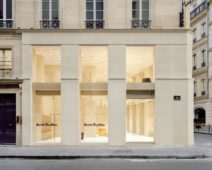 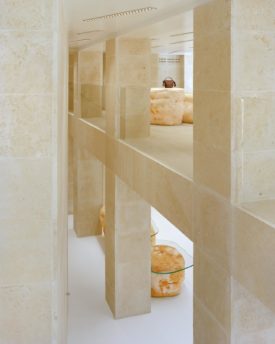 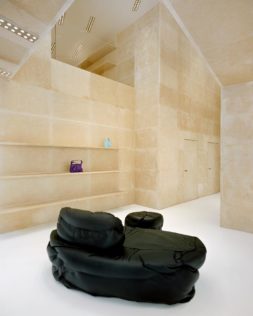 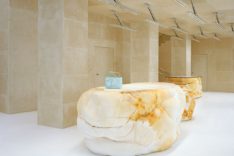 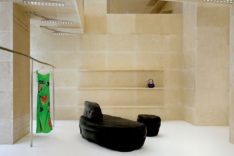