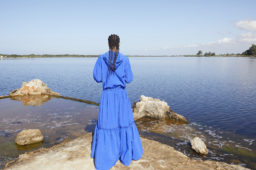 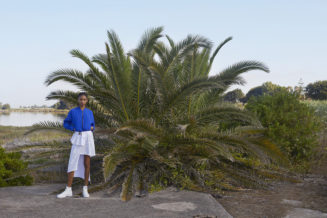 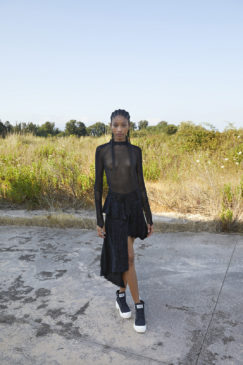 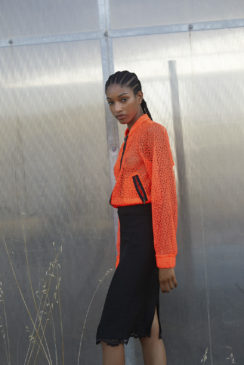 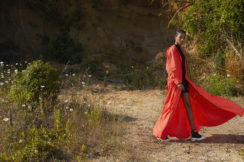 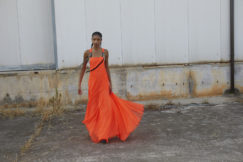 SS2022 – ROMAN RIVIERA Inspired by a long stay in Sabaudia, the next S/S VI MMXX collection echoes the atmosphere of the Tyrrhenian coast and the suggestions of the Roman shore that stretches towards the Pontine area. Long strips of land between sky and sea, paths dotted with maritime pines, large dunes, a briny scent: a suspended and magical Mediterranean frontier, strong lines and colors such as white and absolute blue, or either the red of the dawns on the lakes which embrace this land looking towards Cape Circeo.

A place of creation, writing and freedom for intellectuals such as Pier Paolo Pasolini, Alberto Moravia or actresses of the likes of Monica Vitti and Anna Magnani, who adopted this coastline as a good retreat and a meeting place; but also the original ‘scenario’ for techno, after hours and rave parties in the early 90s, famous for the so called “Suono di Roma”. Valentina Ilardi describes these atmospheres and filters them through her contemporary and cosmopolitan eye in a contrasting dialogue of natural and technical materials, layers of transparencies and comfortable and sensual garments. Her globe trotter eye senses a thousand other journeys and layers of memories in these places, as the fields burnt by the sun and the abandoned architectures evoke the sensations of the great American landscapes, like those of Route 66.

The campaign for next Spring/Summer is based on these suggestions: under the artistic direction of Valentina herself and through the lens of Peppe Tortora, the SS2022 collection relives in some of these places with a new and unprecedented spirit. A series of video-looks created in collaboration with the video artist 241247 will marks the launch of the “Roman. Riviera” campaign on the brand’s social media channels on the occasion of Milan Fashion week 2021, which will be held from 21 to 27 September.

Model Naomi Chin Wing, currently one of the most intriguing faces internationally, wears some of the looks, in a continuous transformation from soft lace to textured and technical fabrics, up to the electric chromatism of “sunset” and Klein Blue. Colors stolen from the landscapes of the. Riviera, interpreted in a metropolitan and grunge key. An image that rewrites the idea of an open and multi-ethnic Mediterranean culture, romantic and edgy at the same time.

VI MMXX Designed as the ideal wardrobe, VI MMXX collection has in its own DNA contemporary and street culture, cosmopolitan vibes and excellent Italian manufactory. The versatile combination of different layers and transparencies emphasizes a dreamy, sensual idea of fashion, full of influences from New York subcultures, to the 90s raves, Japanese avant-guards, as well as that of the traditional quintessential Roman Couture class.

This is Valentina Ilardi’s vision for her first solo project, envisioned after years of experience in the fashion world as a stylist, art director and as founder of Grey magazine – a role she has partaken in for more than a decade, spacing between New York and Rome.

The identity of her brand comes from her experiences gained throughout a life spent in the fashion industry, always reaching for something better and newer.

The classic overall is transformed into a dress that opens up as a wheel as well as in the flounced dresses and in the asymmetrical skirts, in which the different textures of the collection are alternated. Natural, precious and sustainable fabrics such as gauze, tulle and lace are combined with the modern and experimental ones, deconstructing some of the streetwear classics such as tracksuits and shorts and transforming them into suitable looks for any occasions. The lace bomber as well as the “bathrobe” in soft or doubled gauze defines silhouettes and sensual yet comfortable volumes. The absolute white and the deep black, developed on an idea of transparencies and contrasting combinations, light up with tips of blue Klein and electric coral.

A new wardrobe – made in Italy with first class certified fabrics – enriched with a fresh and fervent imagination, ready to inspire whoever strives to live the contemporary with both romance and grit.