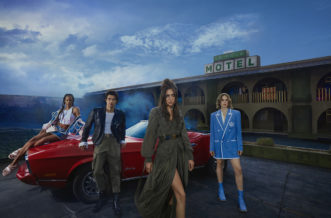 A note from Olivier Rousteing on why he chose to partner with Channel 4 as a way of creating an addictive series as well as a novel way to present his fall campaign. I say BRAVO. Love the idea and looking forward to September 2nd.

“I’m guessing that more than a few of you are going to be surprised by our choice of fall campaign.

Good. That’s exactly the reaction that we were hoping for.

As I’ve often repeated over the past decade, my Balmain team and I are determined to always break down boundaries, as we search for new and compelling ways to communicate with an ever-expanding audience. Of course, we never seek to shock or startle just for the sake of shocking or startling—but we do know that today’s fashion universe could definitely do with an infusion of fresh, diverse and distinctive voices, telling entertaining and unexpected stories.

That’s why “Fracture” struck us as the ideal way to present our latest collection. Instead of opting for the expected seasonal campaign shooting and video, my team and I have partnered with Channel 4 to create a five-episode dramatic series. The story takes place in the outskirts of L.A., at Le Rêve, a run-down motel that serves as the temporary home for a cast of incredible characters. And just as in every Balmain creation, music plays a central part of the “Fracture” plot, which focuses on songwriter Mya (Jesse Jo Stark), as she works through some creative and familial issues with the help of her sibling Ari (Tommy Dorfman), her friend Edie (Ajani Russell) and the poet Noa (Charles Melton).

The choice of an episodic series made perfect sense to us. After all of our endless nights of endless streaming during lockdown, everyone on the Balmain team was already well aware of the addictive power of a drama series. And I love how this choice of medium allows us to blend storytelling, music and fashion in such a seamless manner. Michail, Catherine and Glenn created this one-of-a-kind story and Bradley & Pablo ensured that it was told perfectly. I am particularly pleased that their characters highlight the unique potential of friendship and artistic creation to pull us from dark moments—which is definitely a lesson that many of us learned over the past year. The casting could not have been better. Tommy Dorfman, Ajani Russell and Charles Melton are simply superb. As is Jesse Jo Stark—and that beautiful music of hers has been stuck on a non-stop loop inside my head for months.

I love that “Fracture” helps us reach a much wider public, while allowing those who already know the house a new way of experiencing Balmain. And, as unexpected as this campaign-as-a-series might be, I also love that “Fracture” actually builds upon a long and distinct house history. Pierre Balmain adored using his designs to help tell stories. He worked on the costumes for a multitude of ballet and theatre pieces and he was responsible for the wardrobes of over fifty European and American studio productions. And, just like us, our founder seems to have had no fear in pushing against the limits of his time. For example, while other Parisian couturiers refused to dress a young Brigitte Bardot, due to fears that their society clients would be uncomfortable seeing house designs on “a vulgar display on the screen,” Pierre Balmain was more than happy to create outfits for some of that star’s most iconic roles. And Balmain’s designs for “The Millionairess”—which definitely accentuated Sophia Loren’s famous curves—might have been one of the reasons why that film was ultimately rated as “not suitable for children.”

As always, Pierre Balmain’s legacy is very much a part of this season’s designs, which are seen throughout “Fracture.” The house’s 50-year-old iconic Labyrinth pattern, which my design team and I recently revamped and reintroduced, pops up in a variety of fabrics, scales and tones, covering many of Fall 2021’s most important offerings. I especially love how Jesse Jo took our signature marinière and made it her own and I wonder if anyone has ever shown off the power and attitude of a Balmain shoulder better than Tommy.

Of course, I owe a lot of thanks. In addition to all the names already mentioned, I’m very grateful to Channel 4, Lee Mason and Thomas Pullen for taking a chance on such an unusual series and allow us to bring our disruptive and inclusive message to more people. And, as always, I am in awe of my team. They worked closely together to create and film this beautiful series—overcoming roadblock after roadblock, as the world reacted to each succeeding pandemic wave and fear.”

Streaming in the UK as a box set on All 4 (UK).
Streaming worldwide on Fracture bespoke co-branded website : www.fractureseries.com.