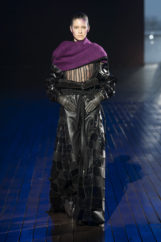 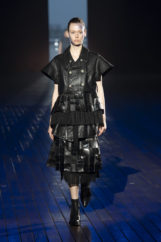 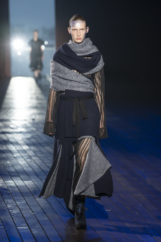 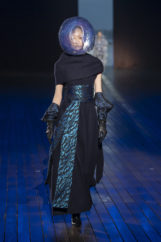 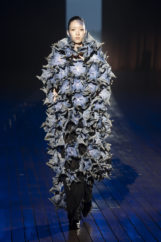 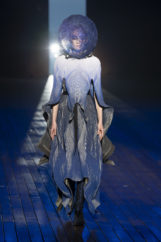 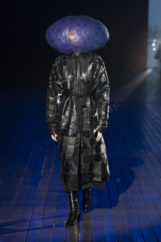 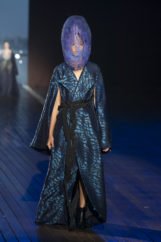 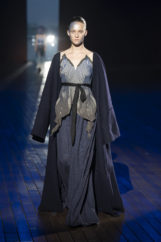 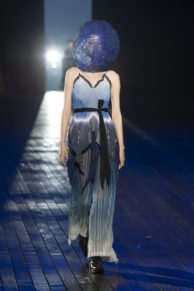 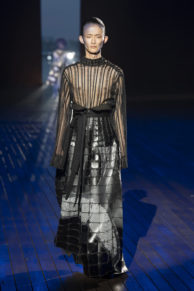 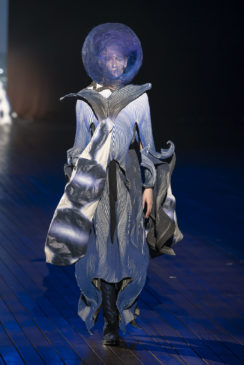 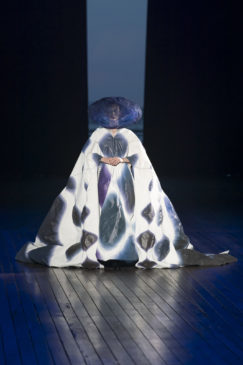 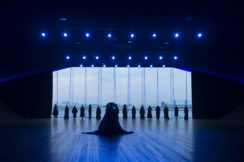 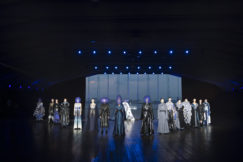 It is always a pleasure for me to watch the evolution of Yuima Nakazato’s collections since I know his work from back in the days when he was graduating with an M.A. from the Royal Academy of Fine Arts. I even had the pleasure of visiting him one time when I was in Tokyo with ASVOFF. But that is another story with a newspaper runway on a white carpet.

“EVOKE” is the 10th  Haute Couture collection of YUIMA NAKAZATO shown in Paris Haute Couture Week as a guest member. There are three different elements: a physical runway show held at Osanbashi Pier in Yokohama, Japan; today’s film presentation of the show  at the official online platform of Haute Couture Week; and a set of editorial photos shot by the photographer Yasunari Kikuma. This collection came to fruition as a result of a close collaboration with very special guests: stylist Robbie Spencer, having worked previously with Nakazato on an editorial, marking a creative reunion after 10 years apart; and composer, pianist and activist Ryuichi Sakamoto, offering his ocean-related works for the show and video.

YUIMA NAKAZATO has regularly presented couture collections at Paris Haute Couture Fashion Week since Fall/Winter 2016/17. The brand’s vision for the future of mankind is one in which ‘Eventually, each and every garment will be unique and different.’ By offering apparel which balances craftsmanship with technology, YUIMA NAKAZATO aims to bring tailor-made clothes to a wider range of people.

“‘To evoke shape from the invisible thing called sound.’,
I thought that doing this, in today’s visually-oriented society, would provide a hint for the next era, one, where we understand and empathize more with people that are different from ourselves. Voice makes up a vital factor of one’s character, and hearing someone speak could be soothing—after all, voice contains so much more than the mere physical bodily information of its source. I have hypothesized that if I could extract design from voice, it would lead to an ultimate made-to-measure item that could eventually open up new potential for Haute Couture.

Whales divide their life in two opposite oceanic realms: the shallow, light-filled sea, and the darkest depths where nothing can be seen. These magnificent creatures must rely on vocalization to communicate, to live— and sometimes, even to sing.

The golden record carried by NASA’s Voyager spacecrafts contains various information about the Earth, with the intention to serve as a combination of time capsule and an interstellar message to any civilization, alien or far-future human, that may recover either of them.
Among the contents of the record were the songs of whales, alongside greetings recorded in a number of different human languages. The sound of whales was imagined to help connect us with that which is unbeknownst to us. In this collection, YUIMA NAKAZATO employs the voices of whales as a metaphor for our humanity, our nature, and our planet Earth, its place in the cosmos. Its title is derived from my intention to ‘evoke’ the shape of clothes for the next era from these songs” YUIMA NAKAZATO

This season Yuima Nakazato used Biosmocking patterns based on the frequency of the whales’ voices. The graphics of whales are printed on leather using multiple layers of UV inkjet prints in order give a braille-like tactile feeling.

Sustainably minded the use of virgin materials was reduced as low as possible, 30% of the collection is upcycled/repaired material, other materials are all natural.

Many of the looks from the collection are, like kimono, made only with square patterns provoking the form that covers all genders, body shapes and ages. Figures in Ukiyo-e became the primary source for styling with various obi-belts and layering, giving a strong sense of Japonism to the overall atmosphere.

The pre-recorded show was held at Osanbashi Pier. The main international passenger pier at the Port of Yokohama, which was designed by Foreign Office Architects (Alejandro Zaera-Polo and Farshid Moussavi), has a grand design reminiscent of the form of a whale. Three water related works by Ryuichi Sakamoto (FIREWATER, TOWARDS WATER, and AQUA), were mixed by Senjan Jansen and played at the show, evoking the awe humanity feels to our planet Earth and suggesting a new step to the next era.

“I gained acquaintance with this young designer called Yuima Nakazato for the first time.
He means to democratize Haute Couture. How ambitious!
He also tackles environmental and social problems from the point of view of fashion, and with a logical attitude. It came to my surprise to learn that not only does he practice conventional sustainable methods, but he even manipulates synthetic protein fabric through digital printing.
I am extremely intrigued by the whale themed collection, just as how this young designer endeavors to change the world.”