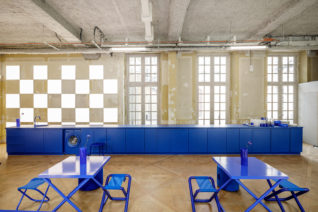 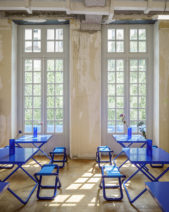 The Mayor of Paris, Anne Hidalgo plans to re-invent the city and what she did was make a competition where architects, designers and developers were to team up and create plans for 23 sites around the city. The winners, who were designated in 2016, were then able to buy or rent the land to carry out their projects, leading to an urban experiment of an unprecedented scale and creativity. 3537 is one of the 23 winning projects that comprise Réinventer Paris. One of the first in a series of activations within a 17th century mansion, is a mixed-use concept space that functions as a showroom for Crosby Studios furniture pieces, a cafe offering food from our beloved Rose Bakery and coffee from Ten Belles, it also will act as a social gathering space for creative incubation.

Everyone loves Dover Street Market and Paris was seriously missing having a full on DSM in Paris up until now. Crosby Cafe at 3537 is is a new division of Dover Street Market Paris dedicated to the production of exhibitions, concerts, fairs and other events. 3537 will stage community exchanges at various venues throughout the city, including its headquarters and namesake, the Hôtel de Coulanges- a 17th century mansion and historic landmark located at 35-37 Rue des Francs-Bourgeois in the Marais district. The cafe opens to the public July 3rd and will remain open through the autumn.

“The first time I entered Dover Street Market years ago, I experienced a new, unorthodox way of shopping that infused fashion with art,” says Crosby Studios Founder and Principal Designer, Harry Nuriev. “Paris is my power spot where I feel free, and I always knew I wanted to collaborate with Dover Street Market on something special. Crosby Café stems from 3537’s mission as a platform for community exchange—a vision I share in my mixed-use concept spaces I create. Crosby Café is a place to enter an alternate reality within a traditional Parisian mansion where you can get inspired, enjoy a coffee, or hangout.”

When you enter the grand dining room you are greeted by a sea of cobalt blue furniture with a 9 meter-long kitchen island spanning the entire length of the dining hall. Parallel to the kitchenette are two rows of dining table sets consisting of blue folding tables, folding stools, and poufs. There is also a terrace overlooking the Jardin des Rosiers Joseph Migneret. You also could hang out in the lounge decorated with circular blue sofa surrounded by checkerboard-patterned walls, floors and drapes.

Established in 2020 by artist, designer and interior architect Harry Nuriev of Crosby Studios, Crosby Studios Home aims to bring high design and luxury goods to the masses through collections that maintain a sense of individualistic expression and nonconformity. On the heels of its virtual debut in January, the new lifestyle brand unveiled its Moscow flagship in March. The mixed-use retail and dining experience combines elements of a boutique, living room, café, social gathering space, as well as a design studio, additionally housing Crosby Studios’ new architecture and interior design headquarters.

CROSBY STUDIOS was founded in 2014 by artist, architect and designer Harry Nuriev. The New York and Moscow-based creative practice spans a broad range of typologies, including innovative commercial spaces, hospitality, designed objects, and fashion and art collaborations, often through the lens of radical design and informed by the aesthetics of contemporary consumer culture. Crosby Studios uses minimalism as a philosophical framework, marrying geometric primaries with crisp logic, creating invigorating and exuberant interiors that serve as vehicles for much broader ideas about how we live and work. After Crosby Studios opened its New York branch in 2017, T: The New York Times Magazine heralded Harry Nuriev as a pioneering voice in global minimalism citing the distinctive influence of Russian craft and architecture on his designs

In 2017, Nuriev of Crosby Studios held his first museum solo exhibition at Dallas Contemporary, and has since collaborated with contemporary artist Liam Gillick and architect Rem Koolhaas’s OMA, crafted a limited edition home goods collection and pop-up installation for Opening Ceremony, and joined forces with Nike to create three different furniture collections for the launch of the new Air Max sneaker. For Design Miami/ in December of 2019, Nuriev received critical acclaim for The Balenciaga Sofa, a conceptual, sustainable furniture installation designed by the artist in collaboration with French fashion house, Balenciaga. More recently, Nuriev has collaborated with COS stores on an international campaign, and with Valentino on a launch campaign for the Valentino Garavani UNIqueFORM boot.

I cannot wait to experience what is sure to prove to be the most exciting and stimulating space in Paris. So much more to say but it will have to stay undercover for now.