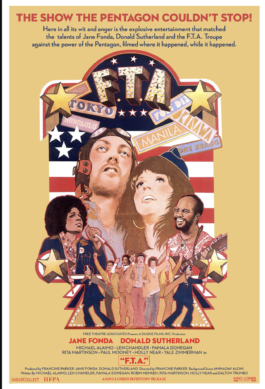 What most of us don’t know about the Vietnam war was that although we are familiar with the mostly white middle class civilian anti-war movement what we were totally unaware of was the anti-war movement that was actually going on inside the military starting in the mid 60’s. Although the Anti-war GI’s were not in the majority their voices were heard, and heard at great risk to themselves. Howard Levy was a United States Army doctor who became an early resister to the Vietnam War. In 1967, he was court-martialed at Fort Jackson, South Carolina, for refusing an order to train Green Beret medics on their way to Vietnam. He said it “became clear to me that the Army [was using medics] to ‘win hearts and minds’ in Vietnamese villages – while still burning them to the ground in search-and-destroy missions.”  He considered the Special Forces (Green Berets) “killers of peasants and murderers of women and children”. Levy came to Jane Fonda and suggested that she create an anti-war tour of entertainers in contrast to the pro-war tour of Bob Hope. At that time Fonda had just finished filming Klute with Donald Sutherland and they decided that Howard’s idea was a good one. The documentary was made in 1971: the Vietnam War had already been going on for about ten years and would last another four years (until 1975). In the early 1970s, it was at its peak of unpopularity in the United States, especially within the counter-culture. In this context, Jane Fonda and her friends set up a troupe that staged sketches and songs performed exclusively for American bases, first in Massachusetts in the United States, then in Pacific bases (Okinawa in Japan, for example). They performed in front of American soldiers: but it was an anti-war show.

The GI’s put themselves at great risk to attend the show. The show directly engaged with and was inspired by veterans against the war and as you can imagine, it upset the U.S. military higher-ups. “The Show the Pentagon Couldn’t Stop!” was highly controversial and was a huge success among stationed soldiers but in spite of good reviews and business, director Francine Parker’s film version was quickly taken out of circulation due to political pressures and wasn’t seen for decades. Thanks to IndieCollect the film has been restored in 4K and was picked up by Kino Lorber. Parker took weeks worth of footage and traveling and condensed it into a ninety-minute film. Although Jane Fonda and Donald Sutherland were among the anti-war celebrities featured what made the biggest impact on me personally was the footage devoted to the disillusioned American servicemen. F.T.A aka F*** the Army speaking out candidly in front of the camera. . The film exposed the racist treatment black’s got in the military.

Aside from the soldier’s really moving comments what really had the greatest impact for me was the powerful song written by Rita Martinson  about a young black soldier who refused his orders to kill in Vietnam. He was put in the stockade and gave an interview to the press where  he said that among his reasons for doing this was that  he thought the war in Viet Nam was an American war of aggression a genocidal and racist war and that he doubted very much if America could  bring equality and democracy to the yellow people of Vietnam when it never brought equality and democracy to the black, brown, red and yellow people of America and that he thought before we begin to preach and leave our country to spread the word that we better clean up our own mess at home. Rita Martinson then sang the song she wrote called Soldier We Love You. If that didn’t get to you I don’t know what will.

Jane Fonda gives an introduction to the film . This film did not help her reputation, since – without going as far as a total boycott – she was less and less considered for American films and had to come and shoot in Europe. F.T.A. helped to change the image that viewers at the time had of Jane Fonda. She was known for the American films she had made (The Chase [by Arthur Penn, 1966], for example); she was Madame Vadim, but what she shot with Vadim, despite Barbarella being an interesting period object, is not what is most striking in her filmography. For all the people who felt concerned by Vietnam and for all the people who were a little involved at the time in France, she took on the role of heroine of protest.