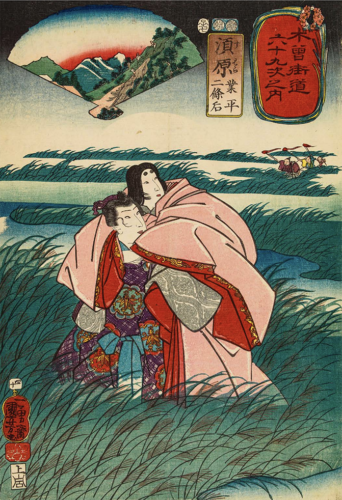 Journey on the Road of Kisokaidō. From Hiroshige to Kuniyoshi will be the first exhibition offered by the Cernuschi Museum after its reopening following a 9-month renovation project. Starting on 16 October, it will bring together an unprecedented collection of nearly 150 Japanese prints, some of which will be shown to the public for the first time. Through a journey punctuated by the various stops along the Kisokaidō route, a selection of remarkable objects will echo the prints on display: armour, calligraphy boxes, katana, battle saddles and picnic kits will be presented.

The exhibition will provide a visual tour of one of Japan’s most spectacular roads: the Kisokaidō, which was one of the five roads created in Japan during the Tokugawa era (1603-1868). It connected Edo (now Tōkyō), where the shogun had his residence, to Kyōto, the seat of the emperor. Unlike the Tōkaidō route, which reached the old capital in fifty-three stops along the coast, the Kisokaidō, with sixty-nine stops, crossed the mountainous interior. It followed a longer, sometimes more scenic and arduous route due to the presence of nine steep passes.

They form the two main parts of the exhibition.

After a major renovation campaign, the Musée des Arts de l’Asie de la Ville de Paris is offering a new permanent exhibition, with a redesigned tour route, a real invitation to travel in the setting of the private mansion designed in the 19th century by Henri Cernuschi.

The tour presents new facets of the collection, highlighting a wide selection of works, the majority of which were not previously exhibited (430 new objects out of 650). Located just a stone’s throw from the Parc Monceau, visitors are invited to discover the permanent collections free of charge.