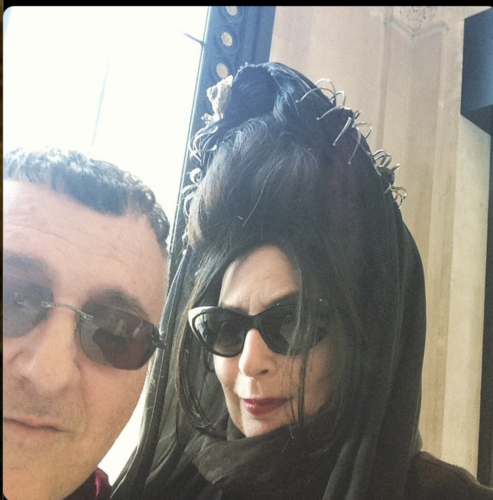 The fashion community is mourning the death of Alber Elbaz. He will be missed. Everyone has a fun story with him. Mine was years ago, I think 2009,  I had heard from an inside source at Chanel that Lagerfeld was not going to renew his contract, his choice of course since he had a life long contract… Anyway I made a blog post, said it was a rumour and don’t believe it till you read it in the official press… I said that Alber Elbaz was going to take his place and that, I think I said Olivier Theyskens was going to go to Lanvin. I’m not so sure I said Olivier or someone else. Anyway Karl and the House of Chanel were furious. Of course Karl never left Chanel up until the day he died. It was a rumour from a good inside source that clearly was not good enough… Around the same time I Am Love was screening at a festival in Paris and I ran into Alber, he was Tilda Swinton’s date for the evening.  Like the rest of the fashion industry, it was picked up everywhere, Alber had heard what the ‘rumour’ was. He smiled at me and said to Tilda, “You know what she said, she said that Karl was leaving Chanel and I was taking his place.” We all had a good laugh, it had the opposite effect on Karl of course. I might add that from that moment on I never wrote another rumour, no matter how clearly it was indicated that it was still, in fact, a rumour. RIP.