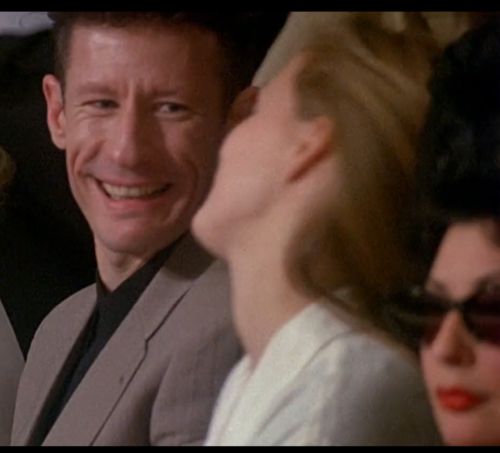 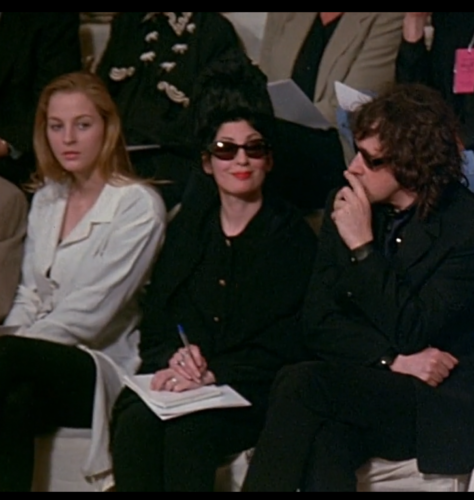 My dear friend, photographer Sonny Vandevelde just sent me these screen grabs from when I was on the set of Robert Altman’s film Pret-A-Porter. I was in a few scenes but this is from the nude fashion show. Stephen Rea played the Steven Meisel character in the film. In the fake Vivienne Westwood show I was sitting next to Tracey Ullman, a huge Jean Paul Gaultier fan, and probably the only one in the cast that really liked fashion. Anyway like all films, a lot of your time is spent waiting so at one moment Tracey asked me to come up with her and have a tea with her and the cast. Lyle Lovett told me he loved my hair, I told him I liked his too. It was a fun experience even if the film was not so great. I remember during the ‘waiting’ Robert Altman came over to me to thank me and to apologise for the waiting and to ask if it was not too boring for me. How could I be bored, I was meeting my childhood icons: Sophia Loren and Marcello Mastroianni, Lauren Bacall,  and actors I loved: Forest Whitaker who played the Xuly Bet character. I had a great chat with Stephen Rea who I’d loved in the Crying Game, he hated journalists, felt they always misrepresented him. I was taking notes and I think he was afraid I would be saying something about him. I said it was nothing just notes to myself that would not appear anywhere.  Richard Grant played the designer aka Vivienne Westwood show,  I was seated between Tracey Ullman and Harry Belafonte. He was great, he asked me what my part was and I told him, I’m like you Harry, just playing myself. He was fun and of course a part of my childhood, a singer, songwriter, activist and actor. I remember meeting Linda Hunt, a great actress and I loved her in The Year of Living Dangerously. Unfortunately she was anything but friendly, she was a misery in fact, so disappointing. Originally I was supposed to have one line: “I think you are in my seat.” However in the end they gave it to a real actress, Sally Kellerman.