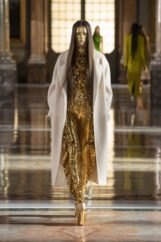 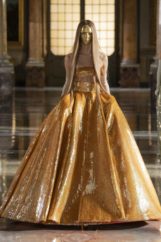 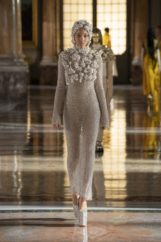 Valentino’s Creative Director Pierpaolo Piccioli revealed his vision for the Spring/Summer Haute Couture season, presenting us what the future of haute couture looks like.

This was haute couture meets futurism, a visual conversation about the coexistence between artisanal and digital. Geometric textures, metallic platforms, models with gold painted faces and sleek hair, minimalist cuts all added up to Piccoli’s impression of what the new normal looks like.

A completely different colour palette filled with metallic colours of silver and gold, neon green and pink styled with toned-down greys… the collection was a mesh of wearable couture and statement gowns. Carrying outlandish features for a younger crowd who is yet to be introduced to haute couture.

“The rituals, the process, and the values of Couture are timeless. They celebrate the human: the mind that conceives and the hand that creates and gives value. Through a work process that sits above time, they produce timeless objects molded on the individual.” stated Valentino on their website. Code Temporal touched upon fashion’s path in the age of technology… machine vs. handmade, digital vs. physical… The interconnectedness between the mind which commands and the hand which creates.

(The brand also announced on Friday, Jan.29th at Valentino’s social networks, it will broadcast a film by Robert Del Naja, about the “Making of the Haute Couture Collection”, produced and edited by artificial intelligence. Stay tuned!)