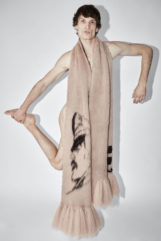 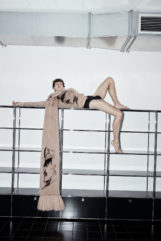 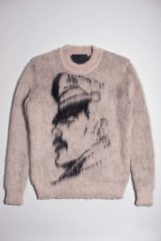 I cannot remember exactly when I met  the Spanish designers from Barcelona, Sergio Pastor and Ismael Alcain, it was at the time of my first fashion film festival You Wear it Well so it was either 2006 or 2007. I remember visiting them in their atelier and thinking that they were the Spanish equivalent to Viktor & Rolf. I have followed their career since then and last time we met was in Mexico City probably five years ago.

Tom of Finland Foundation presents their first collaboration with We Are Spastor which is a limited edition jacquard knit twin set composed of a 70’s silhouette jumper and an oversized scarf featuring an untitled 1977 Tom of Finland drawing.

Each garment is made in soft Italian yarn sourced from a Tuscan mill with a blend of kid mohair and a hand carding finished to create the charcoal drawing effect on the garments.

The garments are manufactured in the surroundings of Barcelona in a workshop run by a young entrepreneur, each garment is carefully woven, produced down to the last detail. Hand knotted and labelled with the Tom Of Finland + We Are Spastor woven label made from recycled polyester supporting local production and maintaining social responsibility of the brand.

For those unaware of who Tom of Finland was (Touko Valio  Laaksonen) he was Finnish and lived between 1920-1991 and is one of the most influential artists of the 20th century for his drawings which redefined masculinity and the position of homosexual men in modern society. He truly changed queer culture with his proud, subversive and joyful expression of sexuality that allowed him to become a powerful cultural force.

10% of each purchase will be donated to the Tom of Finland Foundation for the preservation of the artist’s archive and legacy.