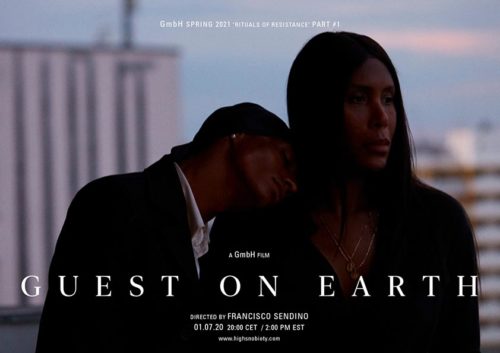 I love the name of the collection and does make one think…’WHEN PEOPLE ARE FIGHTING FOR THEIR LIVES, DOES FASHION EVEN MATTER?” GmbH presented Part #1 GUEST ON EARTH in the context of Highsnobiety’s genius idea ‘Not in Paris’ exhibition.

The DNA of the brand is to use fashion as a platform to start a conversation about race, beauty, and the struggles of minorities. Subject that are in the front of everyones minds at the moment between CODIV-19 and Black Lives Matter and the general state of the world both politically and ecologically speaking.

Rather than presenting the collection in the normal sense, GmbH decided to collaborate with director Francisco Sendino showing everyday life in their neighbourhood in Berlin as rituals of resistance.  Within a weeks time they filmed neo-nazis attacked  a much loved Syrian family business in the night, right in their ‘hood’ or Kiez as it is said in German. The film passes through an invisible being , perhaps an angel who listens in on intimate conversations. The music was composed by local artist Lyra Pramuk.

The second and third projects of GmbH SPRING 2021 will be revealed as part of Paris Fashion WeekÊs official program. It includes a project by video artist Lars Laumann and Eddie Esmael. More information to follow. SATURDAY 11.07.20 19:00 CET parisfashionweek.fhcm.paris