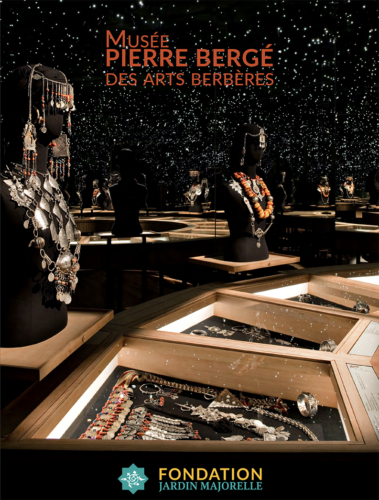 The Berber Museum has just been renamed the MUSÉE PIERRE BERGÉ DES ARTS BERBÈRES in honor of the commitment to Berber culture by its founder, Pierre Bergé. This announcement comes on the third anniversary of the opening of the YVES SAINT LAURENT museum in Marrakech, which was conceived and championed by Pierre Bergé.

Pierre Bergé and Yves Saint Laurent both took a great interest in Berber art upon arriving in Morocco in the 1960s. The Berbers,
or Imazighen, are one of the oldest peoples of the Maghreb, whose presence in North Africa can be traced to earliest times and spans over 9,000 years. Their culture has been enriched by numerous influences, including African, Mediterranean, Middle Eastern, European and International. As the shared heritage of all Moroccans, Berber culture constitutes a fundamental component of the national identity, as underscored in the Constitution of 2011 by His Majesty Mohammed VI, King of Morocco.

That same year, Pierre Bergé founded the Berber Museum and bequeathed his collection to it. His donation included over
six hundred items that together provide a panorama of the extraordinary richness of Berber Art – textiles, jewelry, carpets, pottery and other works – that attest to this vibrant culture that lives on today.

Since its inauguration, over two million people have visited the museum, which has provided Moroccans the opportunity to enhance their knowledge of Amazigh culture, and for international visitors to discover this rich heritage.

“Since my arrival in Marrakech in 1966, I have not ceased to be fascinated with Berber art and culture. Over the years, I have collected and admired this art that extends over several countries at the same time. The Berbers have always been rightly proud of their culture. They have not ceased to reclaim their identity in spite of the vicissitudes they have faced. In Marrakech, in Berber country, in the Jardin Majorelle, which was created by an artist who painted so many scenes of Berber men and women, the idea of this museum occurred to us quite naturally.”

In 2016, Pierre Bergé was awarded the Grand Cross of the Order of Ouissam Alaouite by His Majesty Mohammed VI for his eminent service to the Kingdom of Morocco.

In recognition of this, the Fondation Jardin Majorelle is proudly renaming the museum in honor of Pierre Bergé, its founder and principal benefactor, who was a steadfast advocate and defender of Amazigh culture.

The Fondation Jardin Majorelle is a unique cultural initiative in Morocco, situated on seven acres in the heart of Marrakech, dedicated to botany, Berber culture, fashion, contemporary and decorative arts. The complex encompasses the Jardin Majorelle, the MUSÉE PIERRE BERGÉ DES ARTS BERBÈRES, and the musée YVES SAINT LAURENT marrakech. The Fondation Jardin Majorelle is a non-profit Moroccan institution that funds its own projects, and reinvests its resources into cultural, educational and social programs throughout the Kingdom.