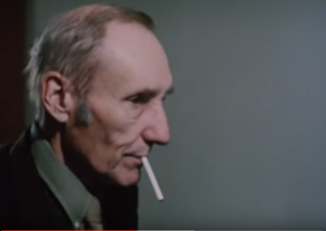 During the recording for the 1982 film on William Burroughs (the resulting programme airing in the UK on 22nd February 1983), Arena followed him to the home and studio of old friend Francis Bacon, where he drops in for a cup of tea and a catch up. This meeting has never been fully broadcast, and the clip is supposedly shown uncut as the pair discuss their views on painting.

This unofficial, Fair Use/Fair Dealings compilation by Barrington Arts also includes all other related footage from that day in 1982 that has ever been publicly leaked.

This unauthorised edit also includes a soundtrack of COIL tracks recorded in the same period as the film footage (1982-83).

The majority of the footage here was directed by Howard Brookner and Nigel Finch.

Footage used from the following sources for review purposes (in date of release order):