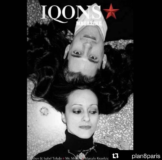 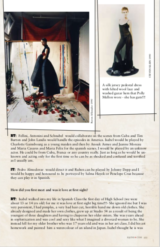 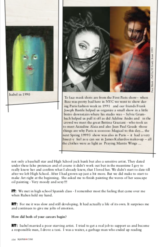 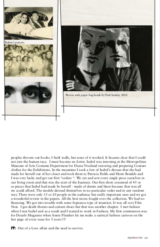 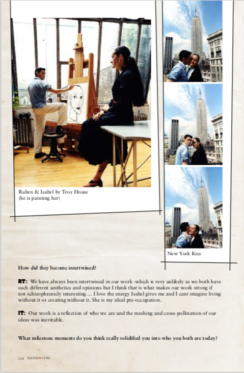 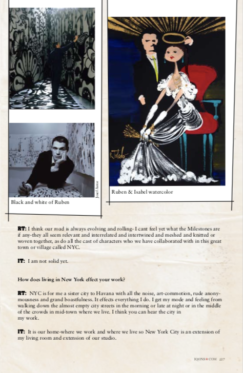 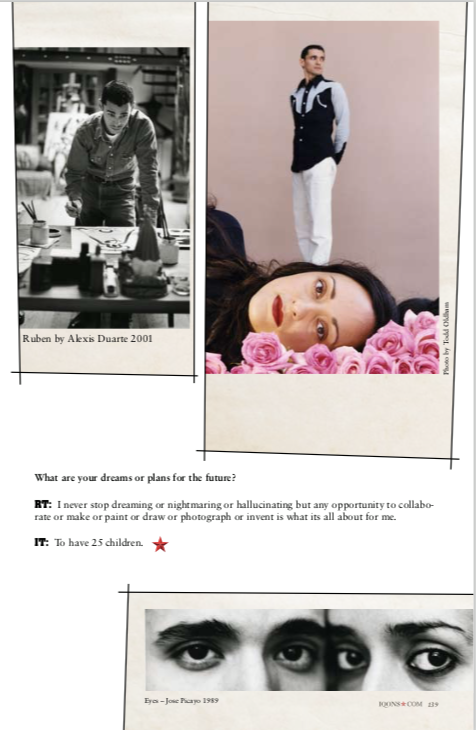 Years ago I worked on a new media idea IQONS, we were the first initiative to network the world of fashion in all its many dimensions. It was the initiative of Raphael Jimenez , aka plan8Paris, it was a digital media with one print magazine and I was the editor in chief of our one and only print magazine. The cover story was dedicated to THE TOLEDO’S. Miguel Villalobos photographed them for the cover. I was so saddened by the death of Isabel and the cut and paste articles about her. Raphael just e mailed me the interview that I did and I thought I’d share it with you as it reveals the soul of two very magical people.

A TIME LINE OF A LOVE STORY

I met Ruben and Isabel in the 80’s in New York and what is so refreshing about this beautiful couple is the way that success has never changed them and that they are as in love now as they were two decades ago, probably even more .The idea of this piece was to create the time line of their love story.

Can you give me a brief history of both of your childhoods?

RT: I was born during the Bay Of Pigs invasion in 1961 .My mother says bombs were going off while I was being born. This could explain my love of noise, chaos and commotion. Havana was a city of chatter, sounds and music. Films were projected on huge walls of buildings as part of the communist propaganda, free culture in the streets, something magical and awesome. Then my parents escaped to the USA when I was 5 . We went from a blue and green sunny paradise to a frozen, dark and scary America. I saw naked trees for the first time. The sunsets at 4 pm .We arrived in January and snow falls covered up cars and street signs-its was eerie and sensational. I learned to smell snow. My first American movie is Night of the Living Dead seen at a Drive In at night followed by Godzilla, King Kong on TV and also Attack Of The Fifty Foot Woman. I was in love with everything scary, monster, space aliens, witches all very sexy and sinister .I was the only Cuban kid in an American town. I grew up surrounded by wonderful white trash kids who lived on a rusty boat house that sat on  the Hudson River where we swam amongst the floating garbage and I learned to be a junior juvenile delinquent , sneaking into movies, amusement parks and carnival etc. …When I met Isabel I left my life of petty crime instantly as I sensed this “Woman” (14 years old) would not stand for any nonsense!

IT:  I was born in Las Villas, Camajuani, Cuba, the hot bed of the Cuban Revolution .The youngest of three females. A childhood full of glaring sunshine and small town magic. I came to the USA at the age of 8.

If you had to open up the planet Toledo to one of your relatives, who would it be?

RT: My Grandmother because I think she would like to see how it all turns out , she was a brave, romantic and strong bohemian poet and she died while I was still a kid but I remember her kindness and sweetness towards us and her fierceness towards the world.

IT:  My father-he died January 7th, 1984 .Ruben and I began our life together that same year together with my mum. He was so instrumental in informing my life and vision and spirit.

If a film director wanted to make a film of your lives, who would that be and who would play the parts of Isabel and Ruben?

RT: Fellini, Antonini and Schnabel would collaborate on the scenes from Cuba and Tim Burton and John Landis would handle the episodes in America. Isabel would played by Charlotte Gainsbourg as a young maiden and then by Anouk Aimee and Jeanne Moreau and Maria Casares and Maria Felix for the Spanish scenes. I would be played by an unknown actor. He could be from Cuba, France or any country really. Just as long as he would be unknown and acting only for the first time so he can be as shocked and confused and terrified as I usually am.

IT: Pedro Almodovar would direct it and Ruben can be played by Johnny Depp and I would be happy and honored to be portrayed by Salma Hayek or Penelope Cruz because they can play in Spanish.

How did you first meet and was it love at first sight?

RT: Isabel walked into my life in Spanish Class the First day of High School ( we were about 13 or 14yrs old) for me it was love at first sight big time !!!- She ignored me but I was very persistent, I had pimples, a very bad haircut, horrible hand me down old clothes. She already designed and made her own clothes, grew up at studio 54 as a result of being the youngest of three daughters and having to chaperon her older sisters. She was years ahead in sophistication and was cool and sexy like what I imagined a divorced woman to be. She instead fell for my older brother who was 17 years old and was in her art class. I did his art homework and painted him a watercolor of an island in japan. Isabel thought he is was not only a baseball star and high school jock hunk but also a sensitive artist. They dated under these falses pretences and of course it didn’t work out but in the meantime I go to really know her and confirm what I already knew, that I love her. We didn’t start to dat till after we left High School. After I had grown up just a bit more. But we did make to start to make Art right at the beginning. She asked me to finish painting the waves of her seascape oil painting – Very moody and sexy!!!

IT: We met in high school Spanish class- I remember most the feeling that came over me when Ruben held my hand

RT: For me it was slow and still developing. It had actually a life its own . It surprises me and continues to give me jolts of emotion.

How did both of your careers begin?

RT: Isabel married a poor starving artist. I tried to get a real job to support us and become a responsible man, I drove taxi. I was a waiter, a garbage man who ended up reading peoples thrown out books. I built walls, but none of it worked. It became clear that I could not join the human race. I must become an Artist. Isabel was interning at the Metropolitan Museum of Art’s Costume Department for Diana Vreeland restoring and preparing Couture clothes for the Exhibitions. In the meantime I took a few of Isabel’s  dresses that she had made for herself out of her closet and took them to Patricia Fields and Henri Bendels and our living room and that was the start of the business . Our first show consisted of 45 or 50 pieces that Isabel had made by herself- made of denim and linen because that was all way. There were only 15 or 20 people in the audience but really important ones and we got a wonderful review in the papers. All the best stores fought over the collection. We had no financing. We got into trouble with some Sopranos type of situation. It was all very film when I met Isabel and as a result and I started to work in Fashion. My first commission was for details Magazine when Annie Flanders let me make a satirical fashion cartoon on the last page of every issue for 3 years!!!

IT: Out of a Love affair and the need to survive.

How did they become intertwined?

RT: We have always been intertwined in our work –which is very unlikely as we both have such different aesthetics and opinions but I think that is what makes our work strong if not schizophrenicly interesting… I love the energy Isabel gives me and I can’t imagine living without it or creating without it . She is my ideal pre-occupation.

IT: Our work is a reflection of who we are and the meshing and cross-pollination of our ideas was inevitable.

What milestone do you think really solidified you into who you both are today ?

RT: I think our road is always evolving and rolling –I can’t feel yet what the milestones are if any-they all seem relevant and interrelated and intertwined and meshed and knitted or woven together , as do all the cast of characters who we have collaborated with in this great town or village called NYC.

IT: I am not solid yet

How does living in New York affect your work?

RT: NYC is for me a sister city to Havana with all the noise, art-commotion, rude anonymousness and grand boastfulness. It effects everything I do . I get my mode and feeling from walking down the almost empty city streets in the morning or late at night or in the middle of the crowds in mid-town where we live . I think you can hear the city in my work

IT: It is our home –where we work and where we live so New York City is an extension of my living room and extension of our studio

Did life turn out the way you had imagined it would?

RT: I never planned my life. I still don’t .I think an immigrant never dares to plan as he know it could all blow up tomorrow so we have to keep light and be able to fight or flight it !!!

Is there anything that you would change if you could?

RT: I would change everything if I could and have it be all so very easy and lovely and calm for my wife. She deserves a very fine life, but I can’t change any of it. So I accept it all and I am very grateful for the wonderful and accidentally charmed life that I live!!!

What are your dreams or plans for the future?

RT: I never stop dreaming or nightmare or hallucinating but any opportunity to collaborate or make or paint or draw or photograph or invent is what its all about for me