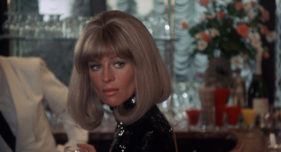 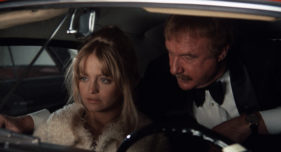 Richard Nixon handed in his resignation with the backdrop of the Watergate catastrophe in 1974, Shampoo was released in 1975 and set on the eve of the presidential election in 1968. The characters are a group of self-obsessed, shallow and superficial people obsessed with their own images and trivial pursuits, none of them bothers to vote. The hilarious story is about a Beverly Hills hairdresser who has no desire to contain his sexual drive which gets him into many complicated situations with his three main lovers: Jill played by Goldie Hawn, Jackie played by Julie Christie and Felicia by Lee Grant and a debut performance by Carrie Fisher (Grant won an Oscar for this performance). Meanwhile Beatty’s character, the handsome,  ambitious womanizer closely resembled Beatty’s public image at that time.

“Beatty allegedly hired Towne to write the first draft of the story while they were working together on Bonnie and Clyde (1967), but the screenwriter experienced a writer’s block that caused their relationship to suffer and motivated Beatty to write a script of his own. The two eventually joined forces and after almost eight years of rewrites agreed on the version that hit the screens. Much has been written about the main inspiration for the protagonist’s character, with Beatty himself, famous hairdresser Jay Sebring and celebrity hairstylist Gene Shacove cited as the central models. Whatever the truth is, Shampoo‘s hero is a self-centered, gullible seducer of no real importance both for the world and, sadly, for the people around him, but on the comical, finely written path of exploration he ultimately pays the price of his ways. Hal Ashby’s film works on several key levels, made with the help of legendary cinematographer László Kovács and enhanced by the tunes of the folk rock institution Paul Simon. It’s a wonderfully acted, seriously funny but somewhat awakening story of a lonely man in a sea of lonely people, a dark satire and humorous drama that stands among the best works of Hal Ashby’s thin but exceptional portfolio.”

I hadn’t seen this film in decades and highly recommend it. May 6 it is out on blu-ray, DVD + Memorabilia.