The last edition of ModaLisboa, which took place in Portugal’s capital this month, was a breath of fresh air, thanks to the welcome injection of new talent. A graduate of Central Saint Martins in London, Constança Entrudo launched her eponymous brand in 2017 and her focus has grown steadily since her debut collection. Her last show, which had a progressive and eccentric vibe recalling the idiosyncrasies of Andy Warhol’s colorful Factory members, blended rawness with refinement, using graphic stripes, pastel tones and innovative patchwork to striking effect. Several pieces were a nod to the late 1960s, from fitted turtlenecks and sexy mini-skirts to elongated flares and cut-out dresses. It seems that the designer wanted to free herself from gender constraints, too, and her strong, diverse casting underlined this approach. Mixing friends with models while emphasizing different beauty types, the Portuguese designer took us back to a place where clothes can express feelings of individuality and emancipation. It was great to see her models walk confidently down the runway and Entrudo’s final bow was greeted with rapturous applause. 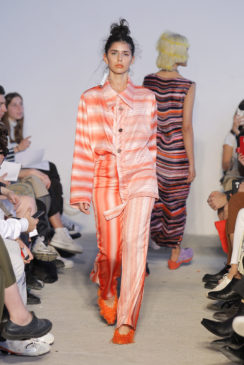 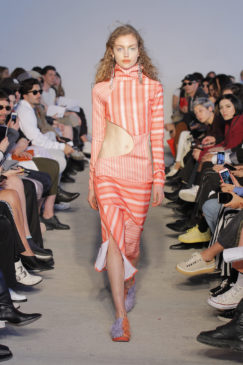