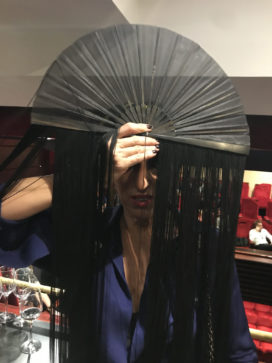 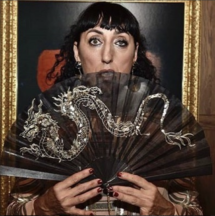 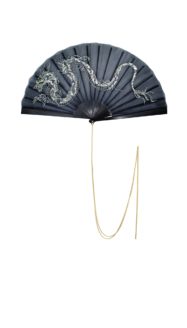 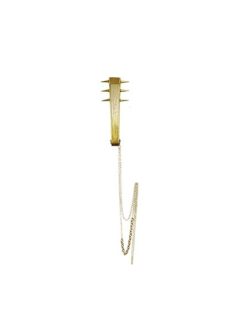 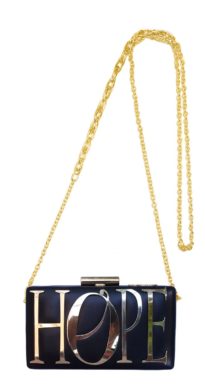 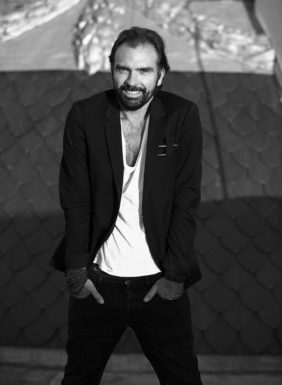 Olivier Bernoux, accessory designer, believes in the seduction of the fan in fact he feels that nothing is as strong as someone opening or closing a fan, almost without thought, as the most sensual movement. The movement of the actual fan he likens to the movement of the wings of a butterfly. The fan has no gender and Bernoux believes that just the action of opening or closing the fan reveals the wearer’s personality.

The start of his love affair with the fan started with the silver screen. For example ‘In the Mood for Love’ by Wong Kar Wai, with the atmosphere, the woman walking down the street, the way she moves the overall ode to sensuality that walks between elegance and sweet provocation, that attitude pinpoints what he feels about the fan. Another film ‘L’Amant by Jean Jacques Annaud, very sensual and warm and of course his dear friend Rossy de Palma in Kika by Pedro Almodovar and in life. Also Marisa Parades when there is the close-up of her putting on lipstick or walking in red high heels in ‘Tacones Lejanos’ (High Heels). He’s a bit disappointed that to date he has not found a film that transmits the power of the non-verbal language of the fan. He regrets that there is no fan in ‘l’Amant’ when she is exhausted and after their sensual encounters. He also misses the use of a ‘shy’ fan in ‘In the Mood for Love’. None the less the seduction of the above mentioned films is exactly the qualities that he attributes to the qualities of the fan.

It is no surprise that the Spanish Actress, Rossy de Palma, embodies all that one imagines from a fan: femininity, sensuality and the power of a woman. They met when Rossy was a member of the Cannes Film Festival and she was looking for fans to offer to the rest of the jury members. A mutual friend introduced them and it was love at first sight. Bernoux then prepared a special fan for each of the jury members. For Guillermo del Toro a Bull Fan, for Xavier Dolan a ‘Fuck You’ fan, for the Cohen brothers a ‘Revolver’ fan…it was great fun for him.

Bernoux grew up in the South of France…in Hyeres les Palmiers in La Cote d’Azur and it was there that he discovered sensuality with ‘La Piscine’ and Romy Schneider …also La Dolce Vita, imagine a french version with a fan. For now Bernoux lives between Paris and Madrid. In addition to the fans he designs clutches.”A fan is an accessory to express your personality and you decide to hold in your arms and open it like the feather fan of a peacock. I asked him how one uses the ‘Diva’ fan modelled above by Rossy de Palma. He was a bit shocked by my question as he considers the incredible fan like a scarf when it is closed and once you shake the long fringed fan it is an elegant and thrilling tremble. “My God! this fan can only be used by real Divas..” Bernoux said.

In addition to his fans he has worked with the R.F. Kennedy Foundation about human rights. Bernoux met Kerry Kennedy, the daughter of Bobby Kennedy and as he was impressed by the work of the Foundation he decided to collaborate. It was not an instant collaboration, it took a few years but since the Kennedy family appreciated his work they decided it would be a good idea to launch a capsule collection for the 50th anniversary of the death of Robert Kennedy and the essence of his speeches of Hope, Dare, and Dream. Bernoux designed the fans from woodcut sticks that reminded him of the beauty of a sunrise.  His last words: “Dare to use a Fan”.