‘Intense’ is probably the word best used to describe the mood of the last Fashionclash Festival, which took place in Maastricht last month. Celebrating its 10-year anniversary, this multidisciplinary edition focused on religion as a main theme, approaching it through various facets. Over a period of 3 days, designers and performers from all around the world gathered to deliver their creative message and some stunned the audience with their passion, bravery and technical skills. Highlights this year included the stunning dance performance LUX orchestrated by Sally Dance Company in the Brandweer, touching on key issues of freedom, gender fluidity and identity. Despite offering several acts scattered all around the city, viewers still come to the festival for the fashion and this year they were spoiled for choice. Firstly, MAFAD presented one of their strongest shows to date, which yours truly already reviewed. Out of the designer runway shows, Maastricht-based talent Maarten Van Mulken seduced the audience with his intricate clothes, fusing creative chaos and historical clashes with a refined hand, mostly visible in his jackets, dresses and coats. It was good to see him design real clothes as opposed to last year’s presentation, which felt more abstract and conceptual. Italian designer Alessandro Trincone -who will open NYFW Men’s next week- pursued his exploration of romanticism and androgyny, with an ongoing dialogue between flou and structured. Seeing his clothes on women felt fresh, and his use of asymmetrical shapes was confident. Rita Sá, a young Portuguese designer who already showed her work at ModaLisboa in Lisbon, walked away with the Vancouver Fashion Week Award. Her collection of blue pieces felt peaceful and spiritual, emphasizing the visceral relationship between nature and humans. Working beyond the usual runway format, Dutch designer Ebby Port invited her audience to view her new creations at the Jan van Eyck Academie in the center of Maastricht. Accompanied with experimental live music, and taking place in a quiet garden, her presentation felt relaxed and hypnotic, transporting you to a space where reality ceased to matter. Challenging everyday life and our own limitations was definitely on the mind of the organizers this time, proving that fashion goes beyond the mere act of producing and consuming clothes. In a world fraught with extremism, tension and fears, Fashionclash’s ambitious and democratic stance has become precious for anyone who’s interested in thinking of fashion outside the box, something that Branko Popovic, Nawie Kuiper and Laurens Hamacher defend courageously each year. Without them, this festival wouldn’t hold its special place in the Netherlands and be a unique platform for intercultural exchange, advocating a tolerant and open spirit for the next editions to come. 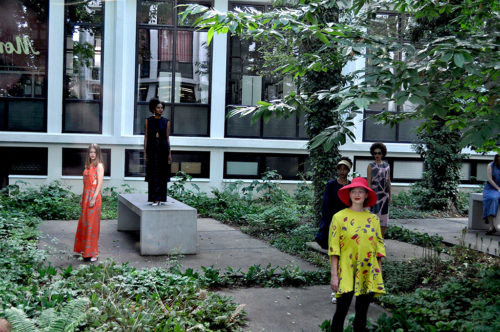