When Branko Popovic, Laurens Hamacher and Nawie Kuiper founded the FASHIONCLASH Festival in Maastricht 10 years ago, their initial aim was to showcase the work of other designers, as well as their own, using an innovative and interdisciplinary platform. This meant for its founders that the festival would always be linked to society, identity, power, sexuality and politics, emphasizing the importance of emerging -and sometimes marginalized- voices, allowing them to join in the fashion conversation. It also implied that performance, music, acting and theater would be represented throughout the festival, adding depth and relevance to its content. Today, the Festival has become an established event in the Netherlands and welcomes incredible talents from all around the world. FASHIONCLASH has created a unique community of designers, models, performers, journalists, fans and thinkers, who seem to share the same values. Within the safe space of the Festival, voices are free to express themselves and tell their story, however extreme or private. This year’s 11th Edition was particularly poignant, because it dealt with themes like oppression, rejection, violence, and how to rise against them positively and creatively. Queerness was also on the agenda and the Festival embraced a plurality of voices, which was truly inspiring. When it came to the fashion part, the collections that moved the audience the most were also the most sincere, from Teun Seuren’s engaged flamboyance and advocacy of gender fluidity to Chiron Floris’ touching homage to her father working in the kitchen. Her reinterpretation of workwear was fresh, alluring and poetic, using embroidery and bright colors to express the joys -and drama- of cooking. Fabio Bigondi’s “Sons of Guns” was also a powerful statement on the relationship between violence and toxic masculinity, which he managed to approach in a playful and idiosyncratic way. This year’s Festival was, interestingly enough, a good one for local, Dutch designers and Maarten Van Mulken’s deranged ladies -who probably forgot to lunch- wore creative ensembles seizing the right balance between aggression and refinement. His dresses were standouts, from an anarchically deconstructed 1950’s prom to a sophisticated green cocktail number. Strong with dresses as well, Ebby Port opted for the presentation format to showcase her optimistic and often 1960s inspired vision of style. Using her friends as models, she showed clothes that had an honest and liberating feel, which pleased her loyal clientele. Walking away with both the 2019 Talent Award Jury Prize and the Clash show Public Prize, Belgian designer Tom Van Der Borght presented a masterpiece he had spent weeks crafting and putting together. Entitled “7 ways to be TVDB”, his epic presentation addressed complex societal issues, such as body shaming, cultural appropriation, racial fetishism and gender politics, while remaining upbeat and life-affirming. Reflective and intelligent voices such as Tom’s -and many of the Festival’s participants- matter more than ever within a dull and increasingly corporate fashion landscape. It’ll be exciting to see which direction the Festival takes next year and how FASHIONCLASH develops in the near future. 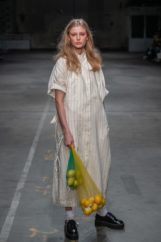 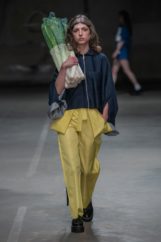 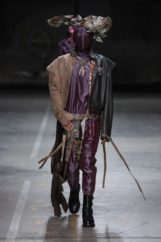 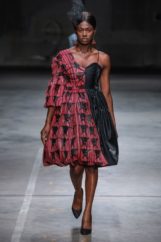 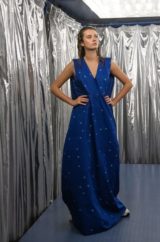 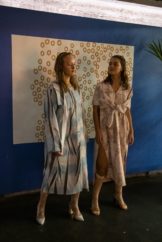