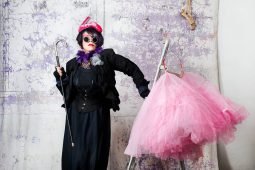 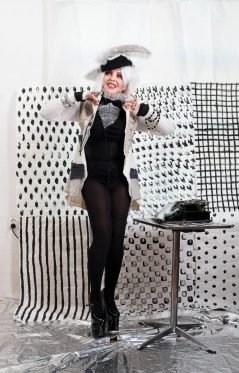 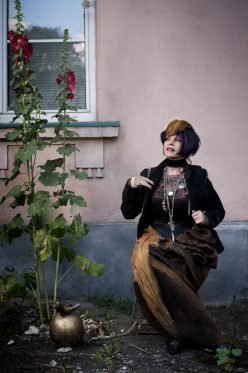 Krystyna Mazurowna: ex dancer and choreographer whose career started in Poland in 1960.  After finishing  ballet school in Warsaw she became a member  of the Grand Theatre in Warsaw. As she was  more interested in modern dance than in the classic repertoire she quickly left corps de ballet and started to perform on national television. In 1967 she founded her own company of jazz dance “Fantom” and frequently performed in  duet with Gerard Wilk (after one of the soloists of Maurice Béjart company) with whom she created original choreography. After leaving Poland she continued her career in Paris where she was a soloist in the last spectacle of Josephine Baker in Bobino music hall and also she performed at the Casino de Paris. In Paris she founded Ballet Mazurowna. She choreographed many spectacles in the Élysée Montmartre Theatre among others. After finishing her career as a dancer she invented many professions  like a “dancing waitress”. She wrote about these experiences and adventures in autobiographical book “The turbulent life of the dancer”. She is the mother of the composer Kasper Toeplitz, the musician Balthazar Bluteau and the pianist Ernestine Bluteau. Krystyna lives in Paris but often travels to Poland. Thanks to  her personality, originality and independent thinking she still is very active and full of energy, participates as a model in fashion shows, appears on television programs, writes books and always says that she isn`t interested in the past but only in the present. Her own unique look is an expression of her creativity and sense of humour. Some time ago I proposed the idea of a photo session to Krystyna with me styling her actually in the end it was the two of us styling in my theatrical costumes and models of the collection Moravetz Recycling Fashion photographed by  Andrzej Pilichowski Ragno . These images are the result of that session one very hot summer day in  Cracow.

All rights reserved. These images can be published only on the blog of Diane Pernet”