Attending the last Y/Project show today was a truly powerful experience, and it seems that Glenn Martens’ vision at the house is getting stronger and more distinctive each season. What makes the designer’s work stand out is his ability to push boundaries and challenge our jaded eye, while perhaps redefining what is alluring, erotic, risqué or provocative. The Belgian designer’s approach to ‘seductive’ is definitely perverse, because he likes to play with sartorial codes to turn them upside down. This time, there were strong echoes of a certain bourgeoisie gone askew, from innocent-looking stripes, prim flowers and conservative plaid to golf cable and argyle knits. Twisting the clichés -and constructions- of bourgeois dressing gave Martens the perfect framework to express his ironic and subversive taste, seizing the line between tacky and plain, vulgar and refined, eccentric and generic. Those contradictions are definitely part of an ongoing discussion around the state of fashion today, and it feels like most of Martens’ clothes are actually operating beyond traditional taste to reach a new level of authenticity. They are therefore able to reconcile the worlds of sportswear and rebellious youth with the requirements of red carpet dressing. They can flatter different characters and body types. They are able to emphasize the individuality of the wearer and empower her. There were so many ideas within this collection that describing single garments seems almost futile. There were no recurring silhouettes ever, and why should there be? Why not celebrate the joy of inclusiveness and experimentation? Once the show ended, this eruption of creativity left you feeling elated and optimistic about the future of this industry. Real fashion is very much alive. 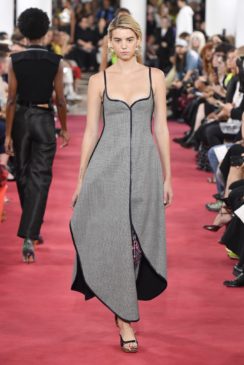 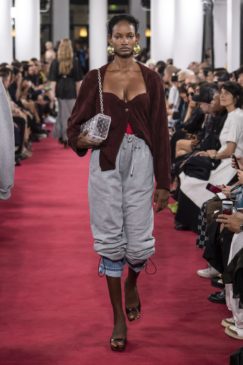