Every season, the ModaLisboa calendar promotes new talents through its Sangue Novo showcase, allowing press and buyers to find alternative voices. Filipe Augusto touched his audience with a soulful and poetic collection, focusing on misfits and outsiders. Uniform styles were recurrent within the line, coupled with industrial, man-made fabrics, creating contradictory feelings of protection and alienation. The fragile and changing identity of those men must have been on the designer’s mind, as their deconstructed clothes seemed ‘in transit’, more in a state of becoming than actually being. Some of his outfits also referenced migrations and cultural integrations, how we can’t stop ourselves from gathering experiences and elements along the way, turning them into our own. The Porto-based designer won the ModaLisboa Sangue Novo Award and his show was intriguing and beautifully styled, which clearly made you want to know more. 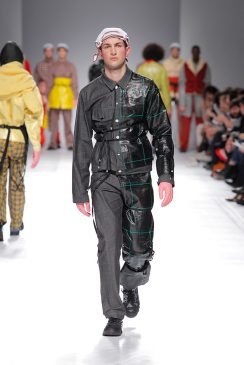 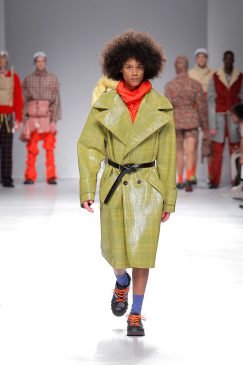