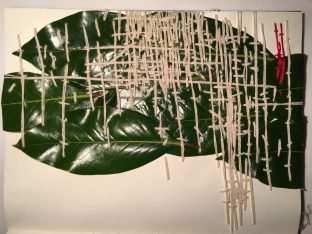 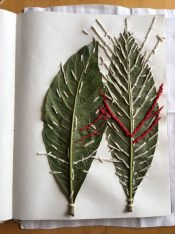 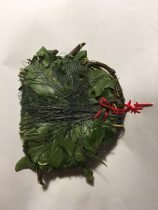 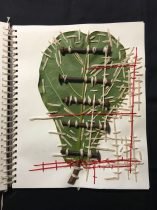 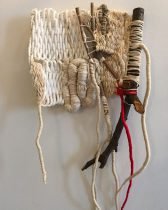 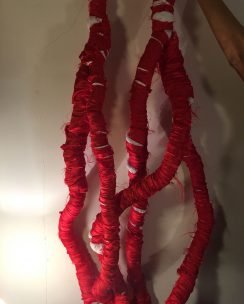 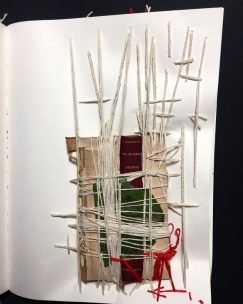 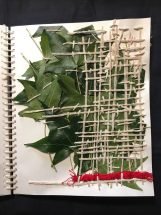 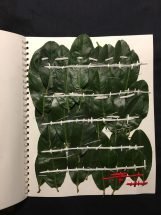 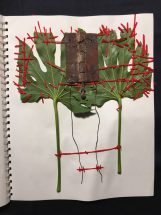 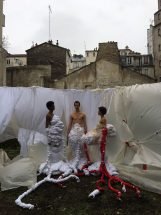 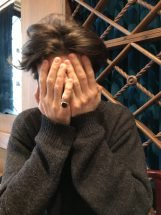 The other day I was on my way to meet a friend in le Marais when I ran into the sculptor and visual artist Thomas De Falco. We met about nine years ago in Milan. De Falco studied tapestry at Castello Sforzesco High School for Applied Arts in Milan and his art is in the form of a textile technique called “wrapping” that involves enveloping textile material with even more textile material to create shapes reminiscent of tree roots. To understand his work you need to understand trees. A book he found about 7 years ago titled The Artistic Anatomy of Trees by Rex Vicat Cole is at the basis for all of his work, performance, tapestry, for everything. When you look at the video above you will see his studies taken from poems or images in the book and then roots painted over the photographs in red or leaves sewn into the book with red threads. Even though he says he sees everything in blue, black and white, red is always present representing love, good or bad experiences and the inside of a tree which to him is like a building. His relationship with trees is rather interesting as trees, even though as the German author,  Peter Wohlleben – “The Hidden Life of Trees”: What they feel, how they communicate, expresses how trees communicate and how their roots spread out warnings to other trees, the trees themselves stay in one place whereas De Falco wants to be without a permanent home. His freedom is more important to him than anything else and like a tree he spreads his roots to everywhere he puts his feet for what ever period of time. It is hard to get an answer as to where he keeps his possessions as no doubt there are clothes and things somewhere… De Falco totally embraces the fact that he is free, nothing ties him down, he does not want a permanent home and his true love is with trees. One of his many lovers offered him another book:  Paul Valery ‘The Dialogue with the Tree” in which he feels a synergy with the author about the conversations with trees. He says while passing through the Villa Medici he discovered that the inside of trees is red. Even though he does not have a base anywhere he does have friends everywhere that offer him a place to work, one is a big studio in Milan, another in Rome and basically he is hosted where ever he wants to be. A year ago he put on a performance at the MAXXI Museum in Rome for their Gala Dinner celebrating the Museum’s 2016 Acquisitions. The performance lasted 90 minutes with textile installations featuring intricate sculptures of silk, cotton and wool, all interwoven with his contemporary wrapping technique inspired by the old art of weaving tapestry but stepping out of the frame into an erratic and instinctive journey along a woven yarn between architecture, body and soul. The ‘roots’ were stemming out fromthe museum’s walls into a free fall and creating complex structures around the bodies of four women and four men placed in the Sala Gian Ferrari and the main hall of the Museum with background live music that he composed.

At the end of last year he had his first solo show at the Triennale in Milan which ended recently. ”

“The performers, who are initially isolated and motionless with their eyes shut tight, moved from their original positions to form a “gigantic consoling embrace”, which metaphorically refers to the social tragedies which, alas, are now becoming a rather familiar everyday spectacle. An embrace from which the subjects seem to draw strength and is rather like (or at least replaces) the embrace of an “absent mother”, who, in the form of “mother nature”, is now threatening mankind. The gigantic wrapping roots extend out from the bodies wedged inside the sculptural block and expand through the surrounding space, linking hands, feet and hair to the exhibition space’s architectural structure.” Description of Intricacy perfomed at the Triennale November 29, 2017. The performance lasted 90 minutes and was accompanied by a musical score composed by De Falco and the performance is the real heart and soul of the project.” http://www.triennale.org/en/mostra/thomas-de-falconature/.

Currently he is working on  new projects in London, Paris and Rome.