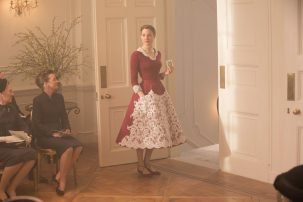 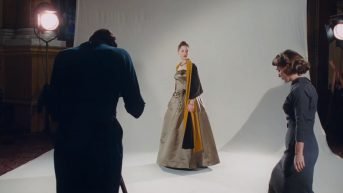 It all started in October of 2015 when Mark Bridges, the costume designer for Phantom Thread sent  Marc Happel a message on facebook asking him if he would be interested in taking on an actor as an intern for a period of time. The two are old friends both growing up in the costume world in New York City. Marc said great and then Mark Bridges said if it is ok Daniel Day-Lewis and Paul Thomas Anderson will be coming to meet you at your shop the following Tuesday. The ‘shop’ is the  the New York City Ballet’s workroom where Marc Happel is the Director of Costumes. It was a 30 minute chat to see if this is someone that Daniel Day-Lewis would be comfortable hanging out with. At one point Paul turned to Daniel and said “I think that we’ve found our man”. They figured out a working schedule, a few hours a day, after the costume shop was closed. In the beginning Day-Lewis was just observing how things were done. Happel was very patient spending days  showing Day-Lewis how to pick up pins or even hold pins in his mouth, a habit of his,  while talking and even eating.Many things never end up in a film but this little action did and it made Marc smile.  Days were spent on simple actions like  cutting fabric, holding scissors and taking measurements and  the action of pinning fabric on to a dress form. These things come naturally to Happel but were completely new to Day-Lewis and Day-Lewis wanted them to come naturally for him as well. For several weeks Day-Lewis would do the routine of taking the measurements on the dress form making sure to do all steps in the proper order. Happel would give Day-Lewis homework such as taking home fabric and learning things like cross stitching and button holes.   It is these habits that make the actor believable. When the New York City Costume shop closes down for a few months in the summer, the two worked every day from 9h to 16h45. At this point Day-Lewis wanted to copy a garment and make it for his wife going  through the entire process from beginning to end. The two did some research and came up with a Balenciaga dress. Day-Lewis was inspired by the way Balenciaga worked and his aesthetic however the character is not based on Balenciaga nor on Charles James as rumour might have it. The dress was to be made for the wife of Day-Lewis, he took measurements on her, draped and insisted on making the entire dress by hand. “Day-Lewis is such an artist, a sponge, constantly absorbing information, from reading and looking at photographs he caught on quickly. ” said Happel. There were two fittings on Rebecca Miller, his wife, and they went very well. He was producing a three dimensional garment that had to fit his wife and she was going to wear the dress out in public and she did.  Day-Lewis learned to embroider, his character’s  name, Reynolds Woodcock.  “Can you believe we are going to get away with using the name Woodcock?” said Day-Lewis.

Throughout the year long process Happel and Day-Lewis became friends as they worked on what might appear to be boring and quite routine they had long chats. Topics included studying acting at the Bristol Old Vic School and making his film debut in Sunday Bloody Sunday in 1971 but then did not act on screen again until 1982 in a bit part in Gandhi. He acted with the National getting a contract for Hamlet for a year, the repetition nearly killed him and he made a rather dramatic exit.  When he landed the role in My Beautiful Laundrette in 1985  followed by A Room with a View from that point his remarkable range established him as a major talent .

Back to the preparation for his role in Phantom Thread, Happel would take a piece of duchesse satin and  give it to Day-Lewis who would start to drape in such a manner that Happel was quite spellbound and found it hard to believe that Day-Lewis was not in reality a draper.  The film opened   at the Walter Reade Theatre which happens to be the same building where the costume shop of the New York City Ballet, the theatre on the 4th floor, the costume shop on the 8th.  You can see the work that Happel and Day-Lewis had done in 5 or 6 of the scenes in the film.  If this is in fact is Day-Lewis’s last film, as has been reported,  it makes the experience even more bittersweet. It still remains a mystery why Day-Lewis has taken the decision to stop his acting career and if it was something that happened before or during the filming. At any rate what remains is a beautiful film, critics rave about it, it will arrive on the screens in Paris in mid-February and I’m impatient for the lights to dim and the film to begin.

Great article on the film in Variety: http://variety.com/2018/film/columns/phantom-thread-is-about-toxic-masculinity-daniel-day-lewis-1202654772/