Working with limited fabric and color choices can sometimes push a designer to come up with stronger results, as evidenced by Aleksandar Protic’s last collection. Born in Belgrade, but based in Lisbon, the designer crafted an elegant and technically accomplished collection, where draping took center stage. Fluid and effortless, his sensual jersey tops were shown with wide-leg pants, in warm tones of ocher yellow and gold. Protic also played with sexy cutouts, revealing a shoulder or showing off the back. Dresses looked as if they enveloped female curves, without being clingy or contriving. Evening was a key point within the collection and Protic’s vision took off, with striking black and white gowns, which had a restrained opulence. In an era of ubiquitous sportswear, the designer’s focus on ladylike elegance was refreshing and sincere, underlining his experienced hand. 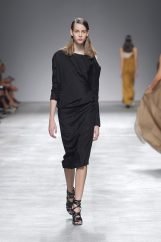 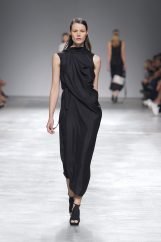 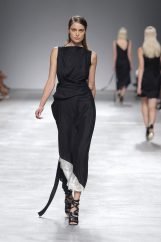