Despite the heat outside, the large-windowed hangars in the Guido Reni District—an abandoned military barracks where AltaRoma was staged for a second season—are better served by summer’s intense sun than the pale glow of winter. Partially bathed in glorious sunlight, the items on display at the 14th edition of A.I. Artisanal Intelligence inspired a sense of jocundity in visitors.

This season, curators Clara Tosi Pamphili and Alessio de’Navasques chose the theme of “prove tecniche di trasmissione,” which were the early 1970s experimental television broadcasts designed to help viewers test the chromatic effects of their freshly purchased color TVs, a relatively new phenomenon for middle-class families in Italy and the rest of the world. (As much as one loved the sophistication of the early black-and-white episodes of Bewitched, there was no greater thrill than experiencing the Color-by-Pathé spectacle of Endora’s vivid Pucci ensembles.)

“The exhibition challenges a commonly accepted idea of chronology and definition of what is finished as beautiful: tests are no longer a passage, but a state of perfection, because they are still linked to studying, experimenting and the infinite,” writes the curators. “It is also the space where fashion and costume blend in a typically Roman creative dynamic.”

Indeed, the ready-to-wear of international young designers co-existed effortlessly with the work of costume designers who have studied in Rome—including creations from the legendary Sartoria Farani, the atelier where film costumes for Fellini and Pasolini (and Barbarella‘s saucy chainmail get-ups), among many others, were made. 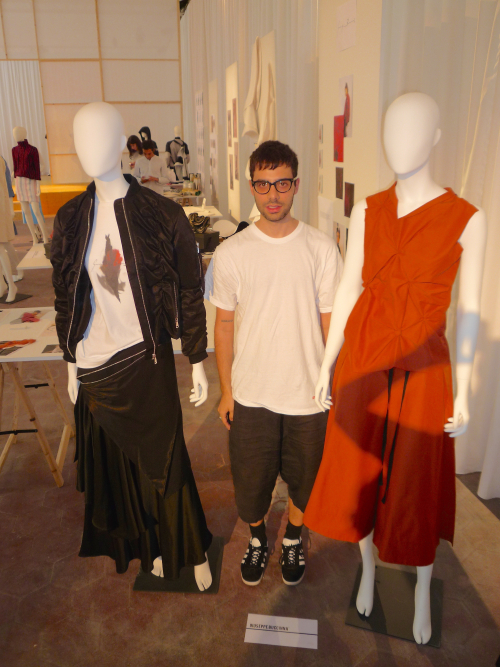 Milan-based designer Giuseppe Buccinna studied civil engineering at the Politecnico University, and pattern-making and sewing at the Istituto Secoli. This would explain why his designs combine strictly technical elements with large-volume, harmonious shapes.

His research is based on the study of the light absorbed and reflected by individual fabrics, which are then knitted as a combination of layers. 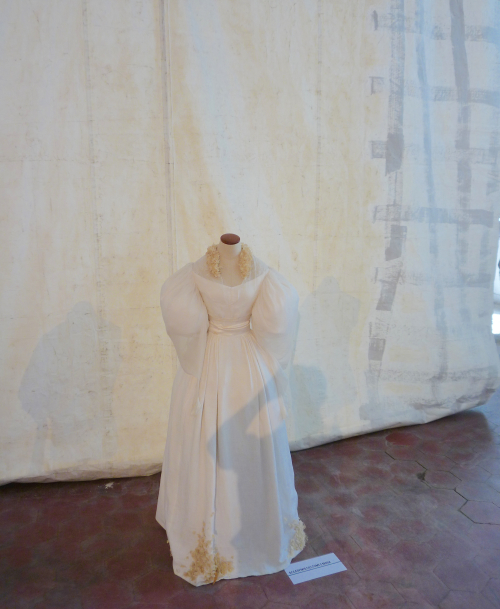 Student work from the Accademia di Costume e di Moda, a school founded in Rome more than 50 years ago. (We attended a rather upbeat soiree there on my second night in Rome this season, for the Accademia Factory event–stay tuned for my full report.)  The Accademia was the first academy to not separate fashion and costume in its training programs.

A theater-stage mood was evoked by the exhibition’s large muslin backcloths by artist Isabella Ducrot, (above) that was prepared by Marcello Panni for the 2016 opera Hanjo.

“A space where fashion and costume blend in a typically Roman creative dynamic.” 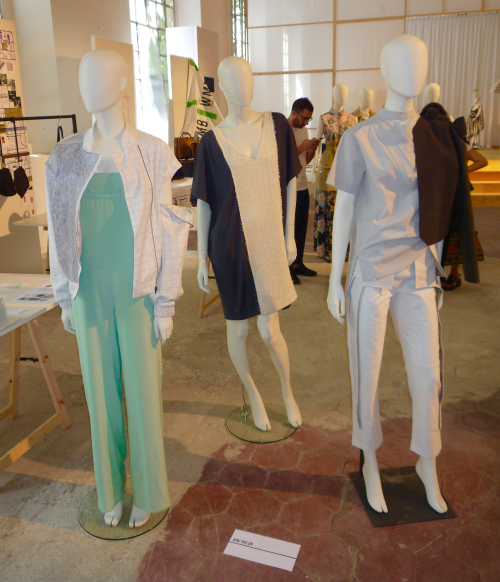 Born in London of Indian origins, Bav Tailor grew up in a traveling family, which enabled her to live in different continents. Her nomadic background, which has provided insights into a variety of cultures and religions, informs her designs. Her geometric silhouettes are inspired by Eastern design, architecture and philosophies.

Her brand of environmentally sustainable luxury fashion, 100% made in Italy, blends the best materials to be certified as natural and recycled. 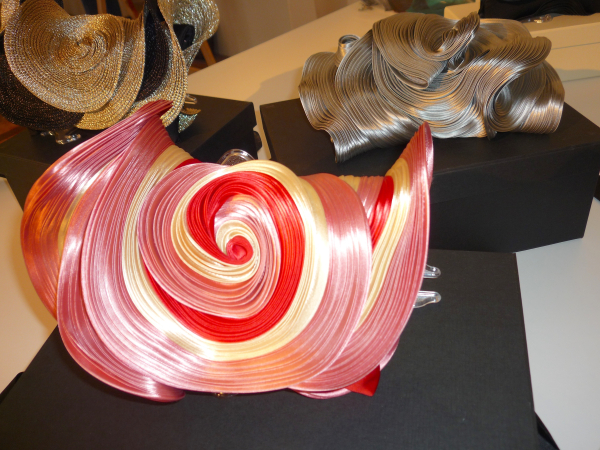 When we flee dying Earth for more vital, exotic planets, we’ll have to make some fast and hard decisions on what to bring with us. My short list will include one of these seductive handbags by Roman artisan Roberto Scarantino. Inspired by the winding volumes of Zaha Hadid’s architecture, each couture bag requires 60 hours of work—a meditative process of assembling the strips of fabric in swirling formations.

Different spatial planes and concentric circles create silhouettes that appear to constantly move due to light refraction. Like the petals of a flower about to open, Scarantino’s bags celebrate that moment of exquisite tension. 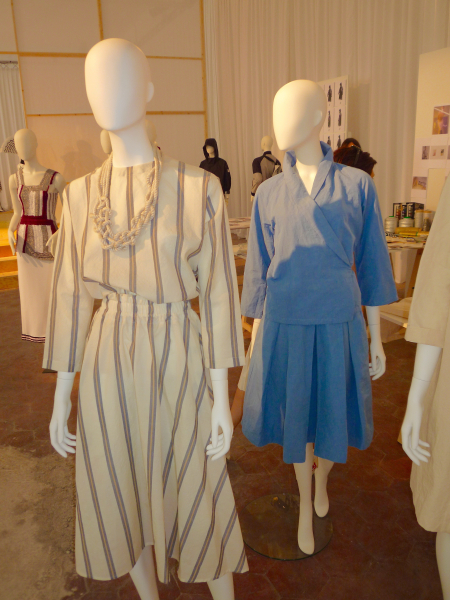 A real family affair, the clothes of Asciari are designed by a Sicilian team of mother, brother and sister. Federica, Pietro and Marta chose the archaic Sicilian verb asciari for its meaning: to meet up, look for, create a meeting. Made from high-quality materials with the expert touch of Italian tailors, the clothes express an attention to detail and, of course, l’amore della famiglia. 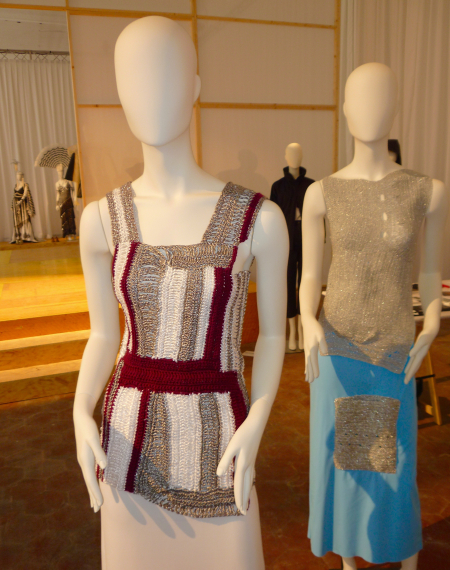 Born in Herford, Germany, Marie Louise Vogt graduated from the University of Applied Sciences of Hamburg. Her clothes are distinguished by lurex yarns and viscose raffia which bring appealing sheen and contrast to her hand-knitted tops, pullovers and skirts. Shining moments: Vogt recreated her work table for the exhibition. 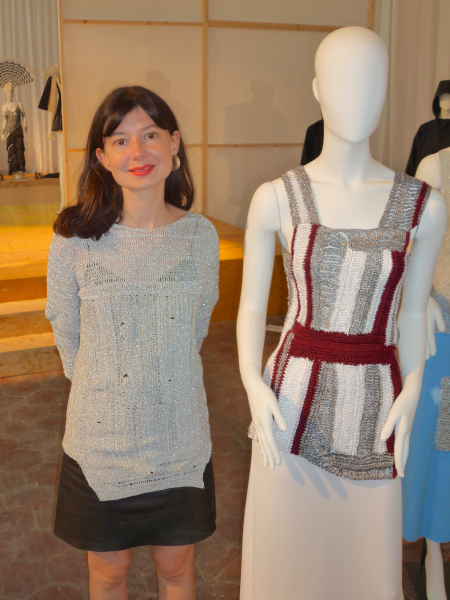 The designer in one of her own creations. 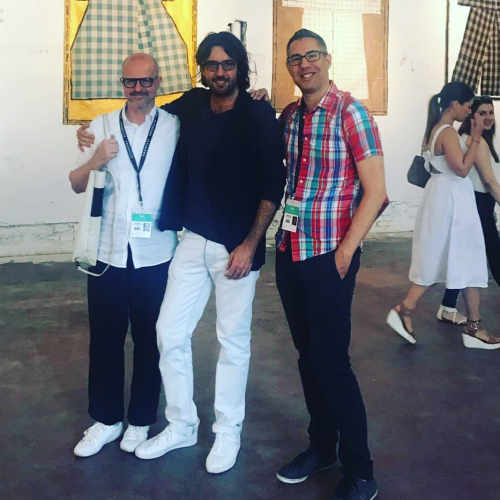 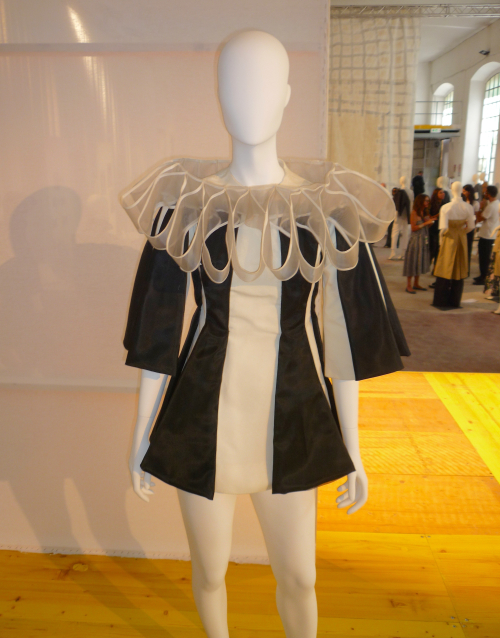 The exhibition theme of television transmissions during the early years of color TV and before really gelled with these costumes that were produced in the storied ateliers of Sartoria Farani. (You can read about my 2014 visit to Farani here.) This ensemble and the two pictured below were made for black-and-white programs on Italy’s RAI network in the 1960s. 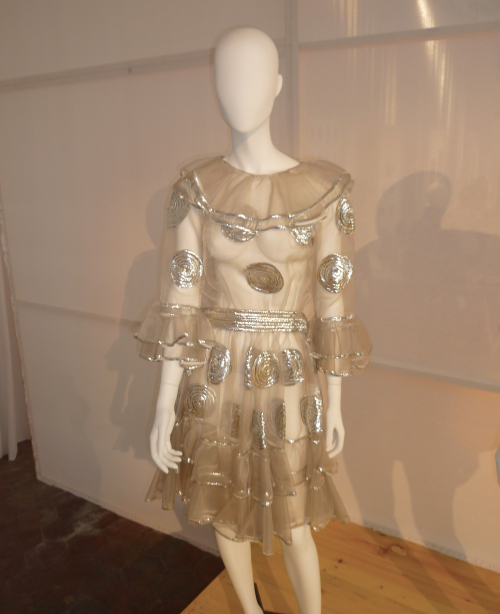 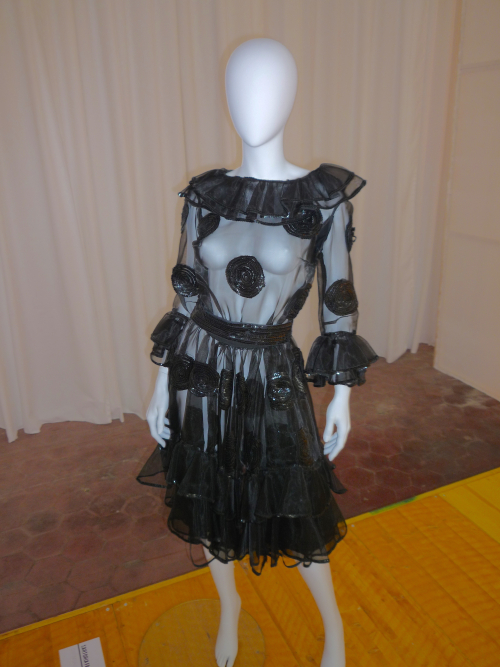 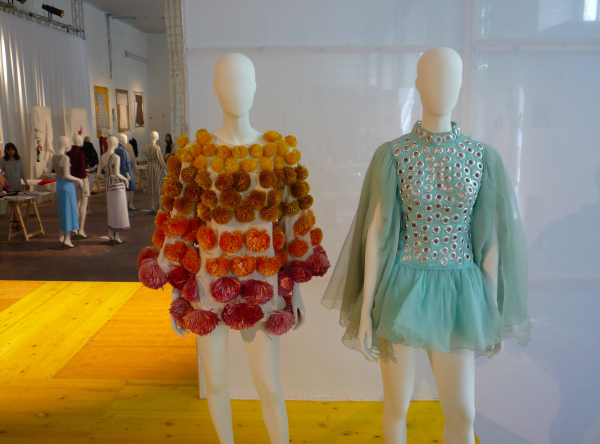 Later on in the ’60s, Farani produced these costumes for a color program on RAI. Sartoria Farani continues to produce costumes for the stage and screen. These costumes by Gianluca Falaschi were for the 2012 Rossini Opera Festival’s production of Ciro in Babilonia—staged in Pesaro, Italy—and were the winner of the Abbiati Prize for costumes. The pieces deliciously channel early 20th-century references, such as the illustrations of Aubrey Beardsley and the coats of Paul Poiret.

Falaschi studied costume at the Accademia di Costume e di Moda and was chosen for this exhibition because his work represents how “fashion and costume influence each other without limits.” 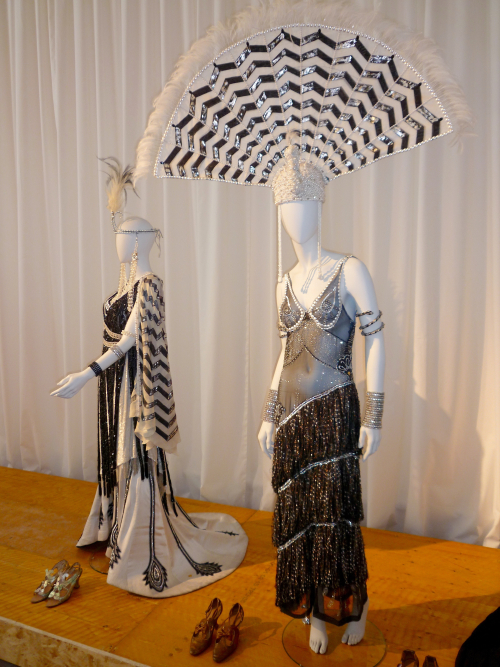 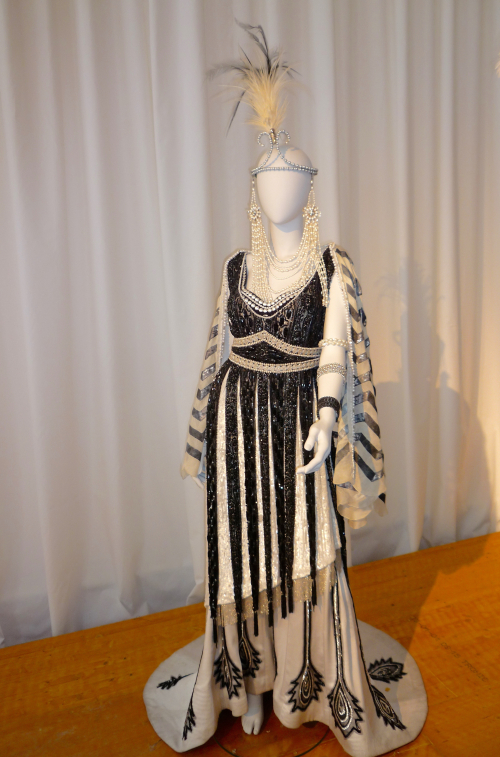 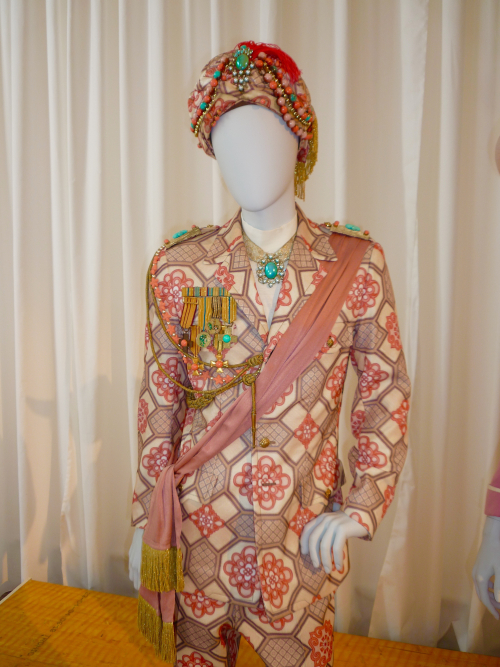 Falaschi’s costume for L’Italiana in Algeri reminds me of something from one of Peter Sellers’ Mod-era films. 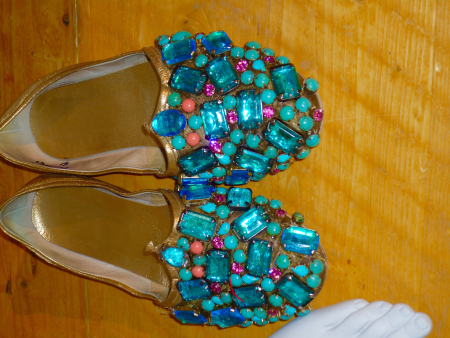 Falaschi’s shoes for L’Italiana in Algeri were created at Pompei, the famed theatrical footwear company that opened in 1932. Their first workshop, located on the Via Cavour in Rome, made shoes for the films produced at Cinecittà Studios, which opened in 1937.

Pompei achieved Hollywood notoriety in the 1950s when they made shoes for such films as Ben-Hur starring Charlton Heston and Cleopatra starring Elizabeth Taylor (two of my favorite films of all time!) during the period when Cinecittà was referred to as “Hollywood on the Tiber.” 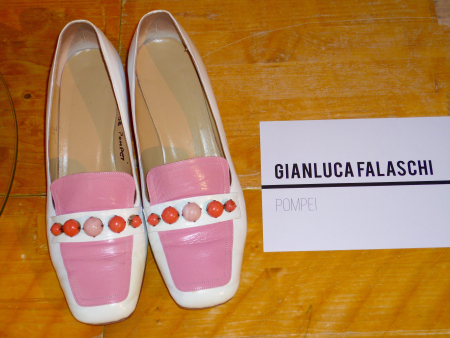 These shoes will go so well with the creme YSL pantsuit that Ava Gardner willed to me, the one she wore in Earthquake.

P.S. – An idiosyncratic look at RAI transitioning from black-and-white to color in the ’70s: