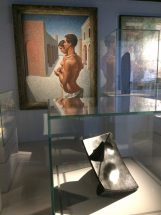 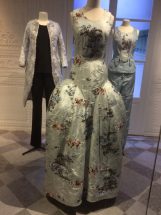 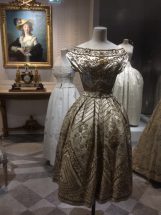 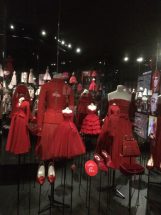 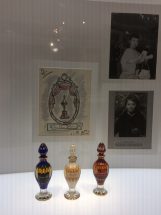 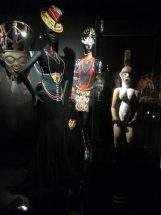 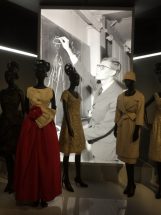 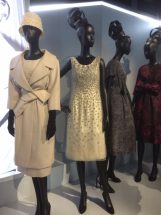 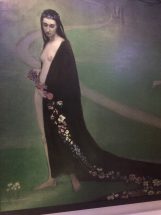 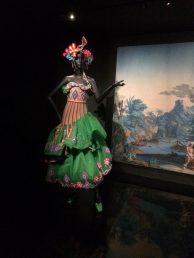 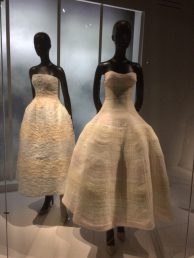 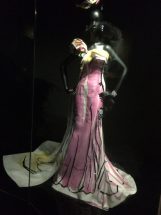 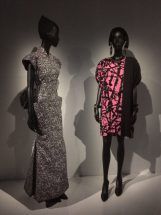 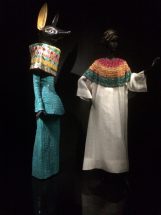 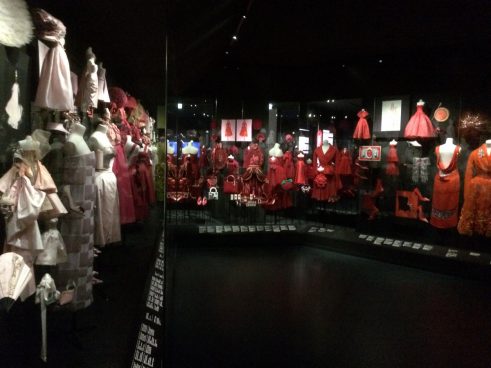 The other day I went to the opening of the Christian Dior exhibition at Les Arts Decoratifs and had the chance to have a chat with the co-curator, Florence Muller. The Dior retrospective is the biggest exhibition ever presented at the Museum Les Arts Decoratifs, Paris and also the biggest exhibition ever presented of Christian Dior.  Muller started working on this with co-curator Olivier Gabet about two years ago and intensively, one year ago.  The process was very difficult and the main difficulty was about editing down the pieces from the huge collection at the museum Les Arts Decoratifs where they have 250 Dior creations and also the patrimony of the Dior House which is enormous because since John Galliano they have kept every creation that was presented on the catwalk. Then there are pieces that were borrowed from the Costume Institute of the Metropolitan Museum, the De Young Museum, Victoria & Albert Museum, Museum of London, Christian Dior Museum in Granville, Palais Galliera and also Pierre Berge Yves Saint Laurent Foundation. Works of art are on loan from the Louvre Museum, Museum d’Orsay and the museum of l’Orangerie, the Chateau of Versailles and Centre Pompidou as well as the Museum of Arts Decoratif and private collectors. 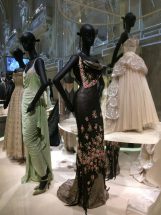 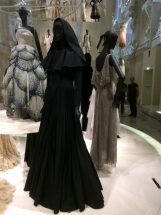 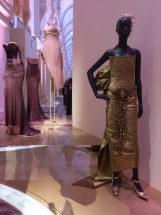 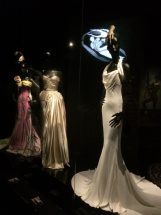 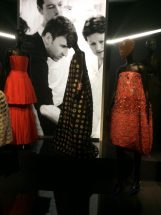 There are more than 300 creations in total but that is not including 100 toiles, 100 art pieces, thousands of accessories, documents, photographs, illustrations, sketches, the collection is enormous. The first room that you enter is about the life of Christian Dior and his childhood and it is here that you find artwork, sculptures, furnishings and the work that inspired him.  This is where you will find documents that were never exhibited before. Muller and Gabet did a great research going through hundreds of never seen before documents especially coming from the Christian Dior Museum in Granville. He grew up in a time of the avant-garde and it was all of his surroundings that influenced the way he worked and how he learned to design, he never was trained as a designer but instead learned his craft through observation, mostly through magazines of the 30’s. When he entered in to the world of the Haute Couture Dior paid great attention to the way illustrators and photographers interpreted his work, in fact Muller explains that that was what inspired him to create and go further. Among the photographers that inspired him: Cecil Beaton, Richard Avedon, Irving Penn Horst P. Horst and others. Dior was equal parts creative and a business man. His father ran a chemical company and it was through him he learned business. When he travelled, he wrote to Jacques Rouet, his director of the House, every day to check on all details including how new employees were working out. These were the days of posting letters imagine how he would have been now with text…

The last Parisian retrospective dedicated to Christian Dior was held at Les Arts Decoratifs in 1987 and focused on 10 years of the couturier’s designs from 1947 to his death in 1957. “Christian Dior, Couturier du Rêve” features not only the designs by Christian Dior but also the six couturiers who succeeded him. For the first time the exhibition spreads across the two main spaces for temporary exhibitions covering 3,000 square meters. One room that particularly held my interest was the one with floor to ceiling toiles, 100 of them and in keeping with the atmosphere of the actual atelier you will find two sample makers working on the canvases and if you would like you can ask them questions. The seamstress in the Ateliers will be there the entire duration of the exhibition.  Another room that is a pure delight is the garden where the collective from Barcelona,  Wanda,  spent 10 days and nights creating 30,000 handmade flowers. Other rooms designed by the interior architect Nathalie Criniere include an art gallery, the atelier, Dior, l’Avenue Montaigne, le Trianon, a boudoir and of course the garden.

Prior to being a designer Christian Dior was the director of an art gallery in association with his friends Jacques Bonjean then Pierre Colle from 1928-1934. The emerging, but still unknown,  artists he exhibited were Giacometti, Dali, Calder, Leonor Fini, Max Jacob, Jean Cocteau and Christian Berard. Like Dior they were in their twenties and became famous afterwards. The famous artists that he was exhbiting were Picasso, Braque, Miro…  Dior was a collector of antiques and objects of the Art nouveau period and was passionate about the XVIII century, he loved gardens and all of this formed a strong base for his own creations.  Throughout his career he designed dresses that show links with art movements and connections with nature and the notion of movement.

Yves Saint Laurent was the first of the six couturiers who followed him. A series of six galleries are dedicated to each of them. In addition to the creations there are also extracts of films and video present in each section. Maria Grazia Chiuri is the first woman to hold the position of creative director at the house of Dior. 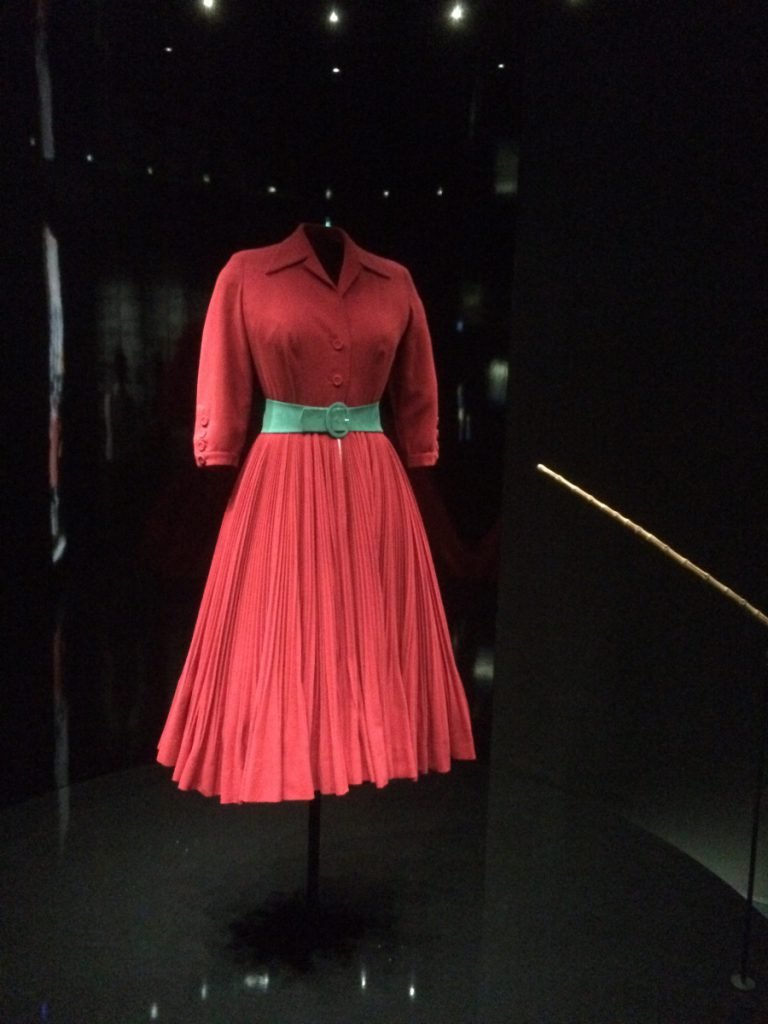 As we wrapped up our conversation I wanted to know which creations were the favourite of Muller and she said the red Diabolic dress with the extravagant pleats that you can see at the entrance of the exhibition and the Trompette cocktail dress which is sensual, lady like and perfect in movement. I had wanted to record our interview but had a technical problem…my mobile decided not to record…hence this strange ending to a very short document of our hour long conversation.

There is an illustrated catalogue of 368 pages with 270 illustrations Edition Les Arts Decoratifs art directed by Fabien Baron with photographs by Nicholas Alan Cope.

Notes on Florence Muller: Denver Art Museum is the Avenir Foundation Curator of Textile Art, Curator of Fashion. She is a highly respected author, has contributed to more than 100 exhibitions worldwide. She relocated to Denver from France in 2015. Her first exhibition in Denver was on Japanese fashion designers, called “Shock Wave, Japanese fashion Design 80′ and 90’s”. In addition she has  worked on numerous major exhibitions in Europe, Asia and beyond since the 1980’s including: Dior, the New look Revolution, Yves Saint Laurent Style, Impressions Dior, Costume Jewelry for Haute Couture, Belles en Vogue, Inspiration Dior, Mode et Art, Madeleine Vionnet, Mode et Libertes and many others including Esprit Dior which opened in Shanghai and traveled to Tokyo and Seoul. She is the author of more than 20 books and has been awarded the Grand Prix du Livre three times.  Muller has co-screenwriting credits for a film series: Histoire du Look. If that is not enough…she is a freelance writer, consultant, juror and professor. She has worked with luxury companies like Dior, L’Oreal, Louis Vuitton, Gucci, Chanel and Celine. Clearly the Denver Art Museum is very happy to have her on board.

Currently Muller is preparing an exhibition on a ashion illustrator who was working in advertising during four decades from the 1950’s to the end of the 1980’s in New York. His name is Jim Howard.