Intriguing and personal, the Fashion Show of the Royal Academy of Art -which took place in The Hague last weekend- made you want to know more about the students and their private world, particularly the 4th Year graduates whose narratives and singular points of view were nicely reflected in their shows and installations. Led by Jurgi Persoons, the 4th Year course encourages students to fully express themselves, often resulting in statement clothes. There was a great feeling of freedom in the show, where these voices could be heard and go for what they wanted, regardless of other people’s opinions. Persoons respects the individuality of each student, and you can tell the teacher/student relationship is indeed a special one. I was struck by the sinister beauty of Rachael Cheong’s masked dolls, whose intricate outfits evoked multiple layers of identity and meaning. Cheong was interested in the darkness of the human soul and how dolls can spy on us when we’re alone, accessing all our secrets. Her installation, where you could discover her own dolls in a cube -peeking through several holes- felt like she was giving away her own secret rather than hiding it. Roos Boshart’s exploration of sartorial codes and fashion fetishism was also relevant, placing garments in a vacuum or lavishly embroidering them to fulfill erotic fantasies, which seemed to reference Helmut Newton’s glamour amazons. She managed to decontextualize pieces -such as jeans, pants, coats or underwear- to give them a new meaning. Again, her work was dealing with our perception of clothing, trying to change and challenge it. Soulful and romantic, Veronika Konvičková’s collection dealt with the beauty found in silence and stillness. Her outfits were about escape and reconnecting to oneself, which she expressed through elegant layering and contrasting textures. Her garments reflected nature, too, with an organic flair that felt appealing. Thalonja Slui’s departure point was schizophrenia, losing touch with reality while still being complete. If some of her shapes seemed anarchic and unruly, her ability to tailor and structure was quite impressive, as well as her feeling for space and volumes. Wearable and dramatic, her clothes were of the moment. It was, in fact, exciting to see 4 female graduates deliver the goods while keeping a sense of playfulness and distance. Those were seductive, strong and confident clothes, three elements you need to create emotions. 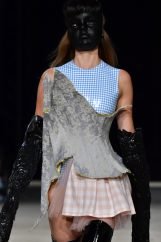 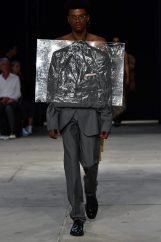 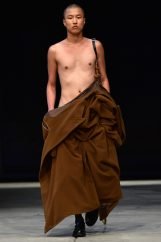 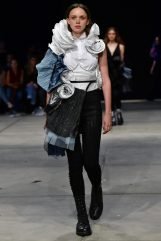 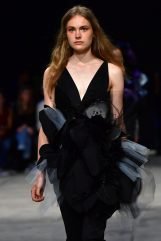 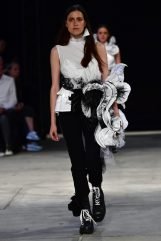 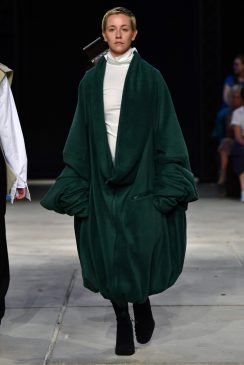 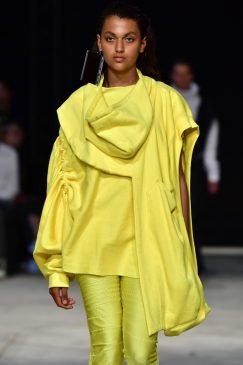