The latest show of La Cambre Mode(s) -which took place in Brussels last weekend- was both powerful and inspiring, proving that Belgian schools have kept their finger on the pulse. If some of the 4th Year students made a strong statement this year, from Cyril Bourez’ self-aware presentation -including a touching homage to iconic designers- to Alice Fraudeau’s personal take on dramatic ruffles and twisted S&M, 5th Year graduates distinguished themselves with clear visions and uncompromising messages, which often challenged our perception of the industry’s codes and rules. On the one hand, the abundance of sequins, frivolous clothes and ‘glamour styling’ seen on the runway seemed to express a burning desire for escapism, running away from a harsh and violent reality that defines our present day. On the other, some collections felt more political, intimate and committed, dealing with the current context while underlining a socially inclusive message. Kevin Prat’s ode to Céline Dion was both kitsch and engaging, exposing a consumption society still obsessed with branding and celebrity lines. Often signed with the singer’s name, Prat’s garments seemed to epitomize fashion as an ongoing spectacle and red carpet trauma, a notion that would certainly please Guy Debord’s fans. Ester Manas gathered an alluring army of curvy girls who exuded strength, grace and confidence. Their garments were protective and revealing at once, challenging notions of contemporary female beauty and delivering a body positive message, which resonated with the crowd. She walked away with 2 prizes: the Prix Etoile de Bazar and the MAD Brussels Award. Gabriel Figueiredo’s gender-bending route was surprisingly refined and poetic, including butterfly crystals featured on tailored jackets and a tulle cape adorned with red hearts. His decision to customize vintage pieces may have been controversial, he nevertheless presented clothes that felt relevant and self-assured. Like most of his peers, he went for guts as opposed to logics, something that gave the school’s show an emotional charge. 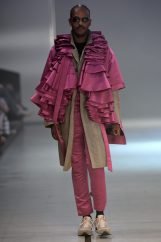 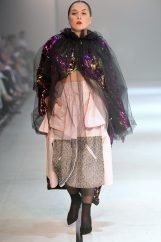 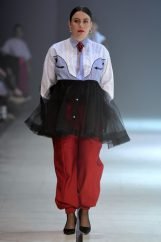 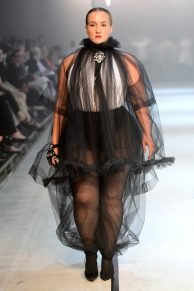 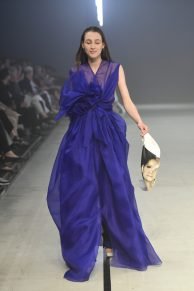