You can count on Lutz Huelle to come up with inventive and desirable clothes, which find the right balance between playfulness and elegance. His last show was unfussy and forward-looking, celebrating his beloved reconstructed pieces as well as sharper tailoring. His panelled bomber jackets and directional denim styles have now become true signatures, understood and worn by a global audience. The novelty this season came with sleeker and more sophisticated garments, such as a striking tweed coat, which underlined the waist and emphasized female curves. Draped dresses were also timeless and chic, proving that the German designer is as comfortable with cozy sportswear as he is with precise shapes. Disco touches, such as glittering shoes and a layer of shiny silver on a few denim looks, contributed to the party atmosphere of his show, which was fun and unpretentious. There were many clothes to fall for and cherish, substantial and easy at the same time. 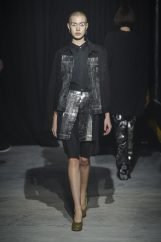 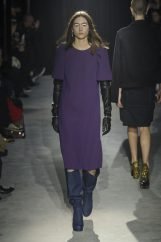 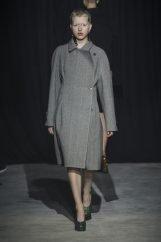