A graduate of Bratislava’s Academy of Fine Arts and Design, Petra Kubíková likes to design womenswear collections that experiment with tailoring and traditional textiles, twisting shapes to create new propositions. Her latest point of departure was graphic plaid, a staple menswear fabric she used for dresses, aprons and cozy outerwear, giving a nonchalant air to her elegant garçonnes. Odd phone receivers -which were featured on several looks- seemed to hint at the cheeky surrealism of Elsa Schiaparelli, while Kubíková’s garments engaged in a dialogue between fluidity and stricter lines. Her casual pieces were appealing, too, such as a slashed printed jersey dress, which had the ease of a simple t-shirt. 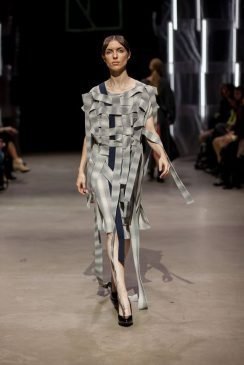 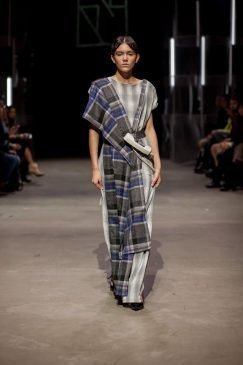