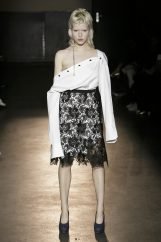 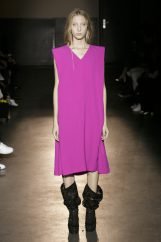 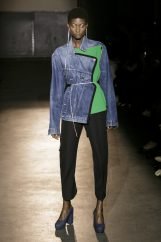 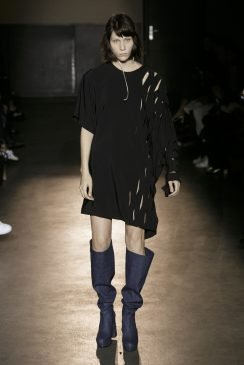 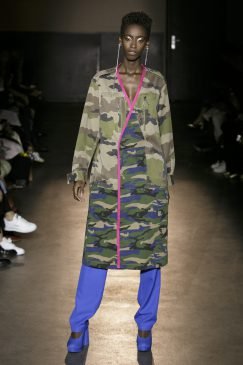 Lutz Huelle presented an engaging and confident collection yesterday, with a focus on strong outerwear and graphic shapes. A raised shoulder trench set the tone, while the collection offered cool variations on familiar military shapes, which were given the Lutz treatment: a camouflage jacket featured a contrasting pink trim and different patterns were mixed to achieve surprising patchworks on collarless coats. Crayola tones had a childish quality that emphasized the positive spirit of the show, which was more about emancipation than conflict. Black lace added sophistication to sleek separates, from straight trousers to pencil skirts. Denim was pieced together with bright fabric, which developed further the ideas introduced last season, turning them into distinctive signature garments. Clean styling and simple shapes meant that Lutz Huelle’s clothes were firmly rooted within reality, and it was refreshing to see a show that felt clever and desirable at once.