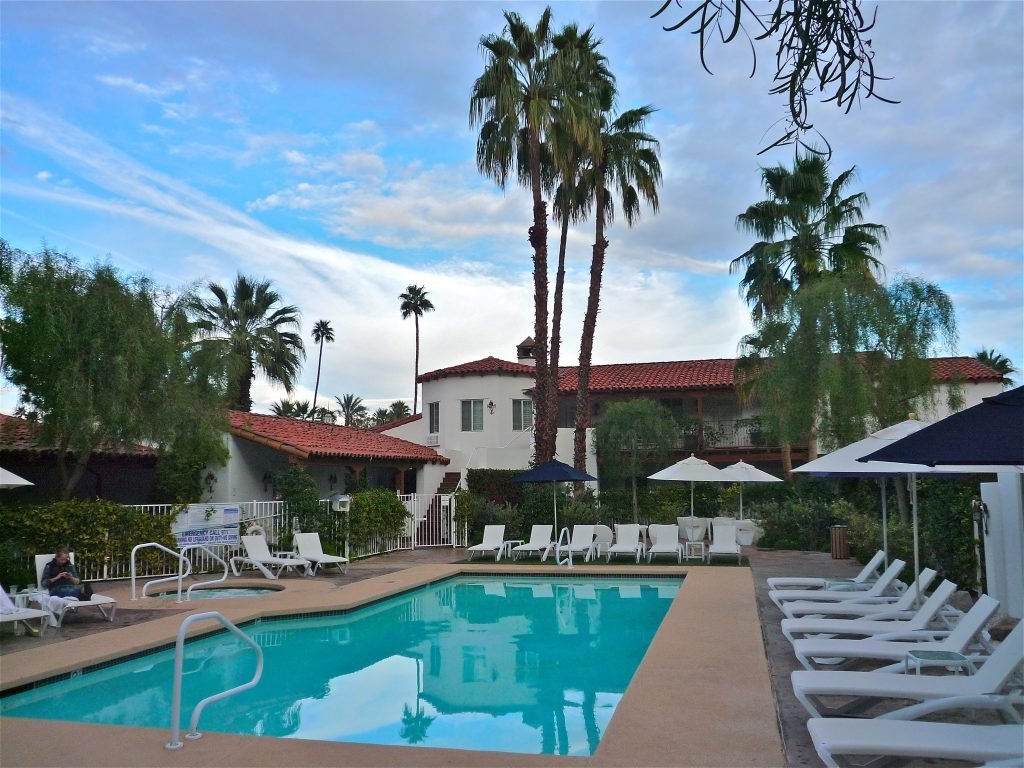 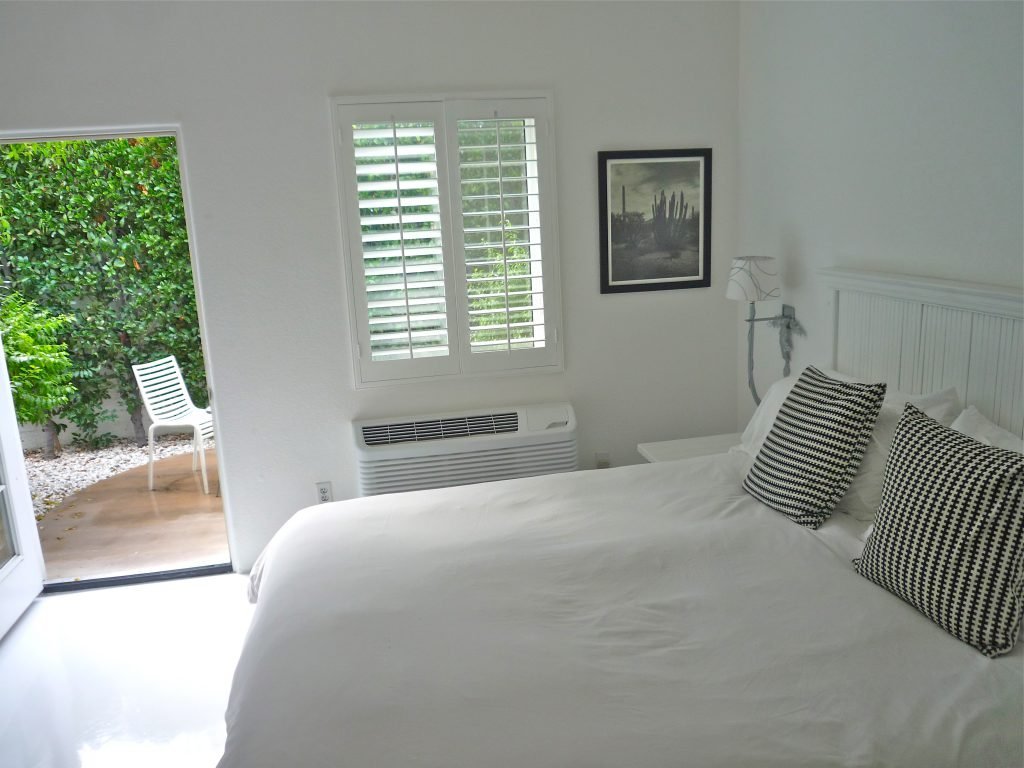 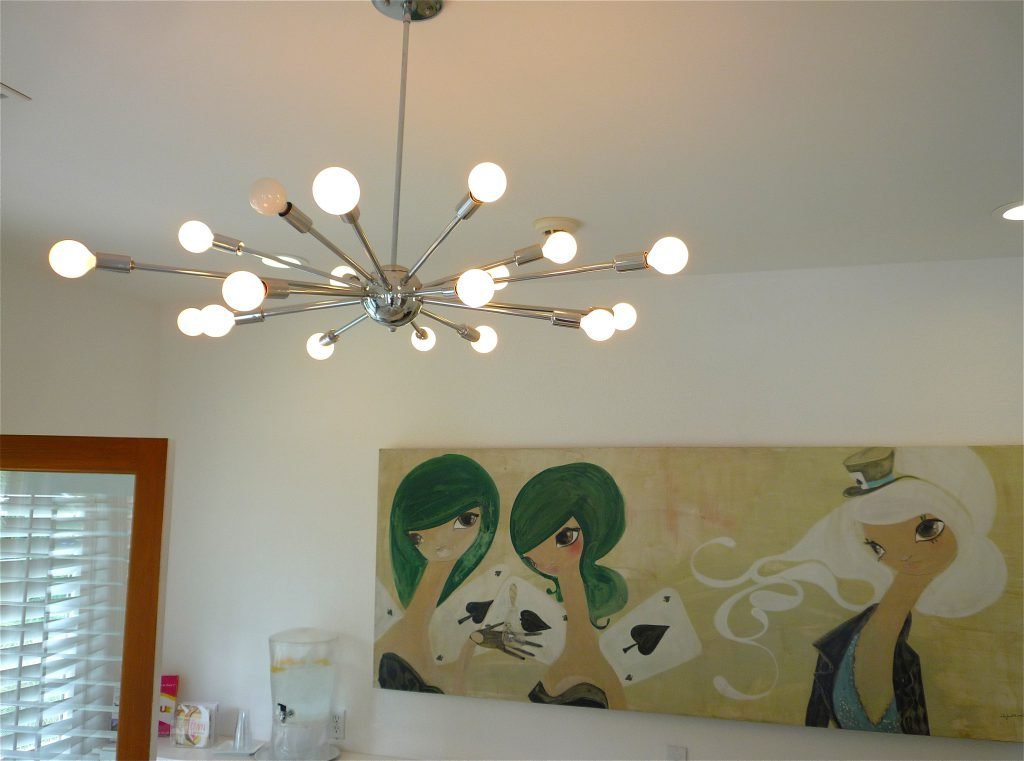 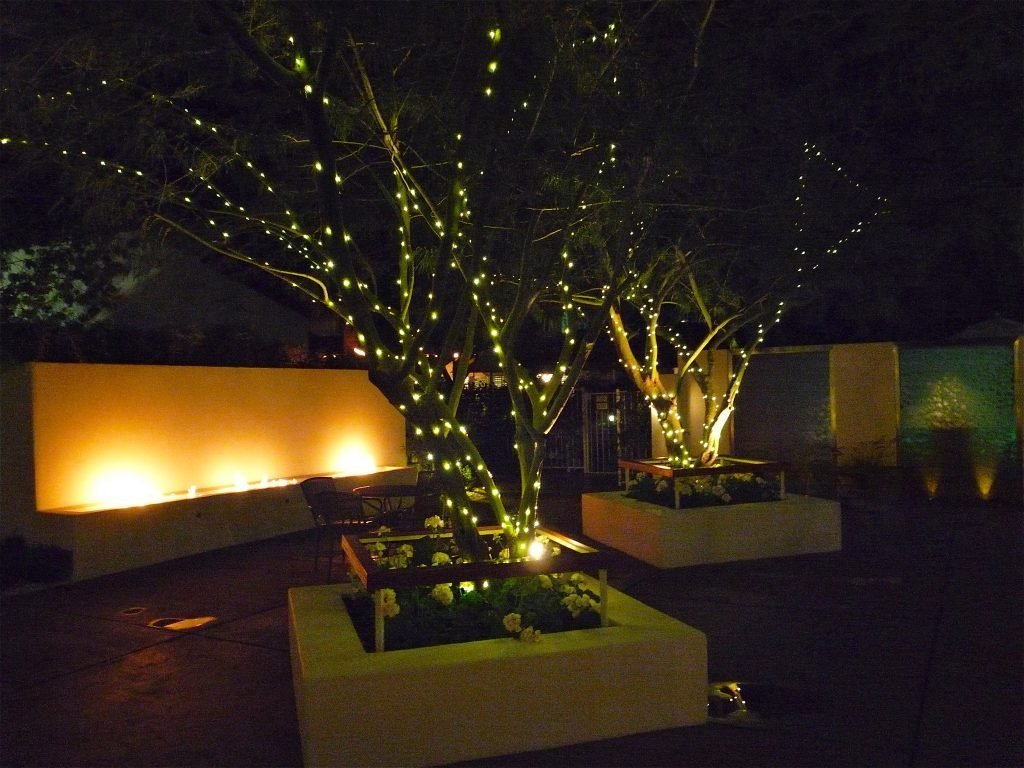 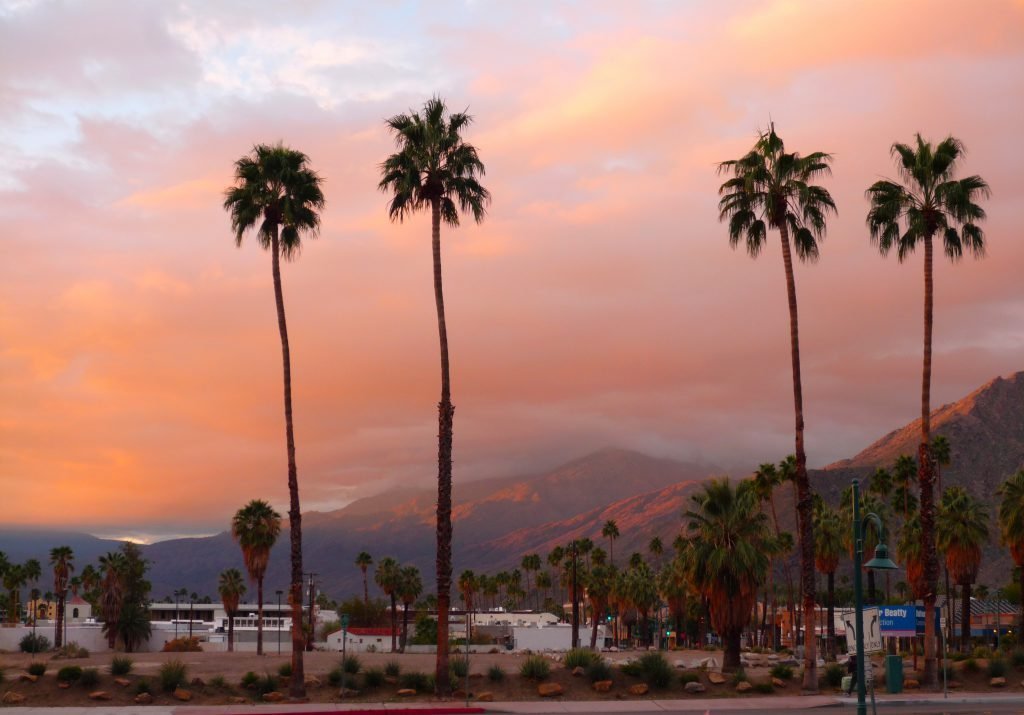 1. Rule the pool. 2. My King Poolside Deluxe room with private garden. 3. The lobby with painting by Kelly Tunstall. 4. The courtyard is a great place to hang with a bottle of wine after the sun goes down. 5. This breathtaking vista is only a 2-minute walk from the hotel.

Although it seems like an eternity ago that I was in idyllic Palm Springs, what with the brutal winter we’ve been having in New York, I still have a remnant of a tan line and wonderful memories. At the suggestion of my dear friend Patrick McDonald aka the Desert Dandy, I stayed at the delightful Alcazar Hotel which is located in the chilled-out Uptown Design District. The Alcazar, opened in 2011, is a classic Spanish Colonial building transformed into a modern boutique hotel that oozes charm and relaxation. In the 1930s, the property was a secret hideaway for celebrities who went there to dry out (which was the last thing I was there for!) and in 1950 it opened as a hotel called the Pepper Tree Inn.

The Alcazar is part of a trio of adjoining properties operated by Foundation 10, which is owned by local chef and restauranteur Tara Lazar. I had breakfast at one of their two restaurants, the wildly popular Cheeky’s, four times. You haven’t lived until you’ve chowed down on their blueberry and corn buttermilk pancakes and the transcendent bacon flight (Nodines applewood, garden rosemary, jalapeño, ginger/sesame and apple/cinnamon). As I only eat bacon while I’m on holiday, it was quite a treat indeed.

The other restaurant is Birba, acclaimed for their delicious pizzas, live jazz music and patio dining. Unfortunately I never made it there because it was closed on the night I wanted to go, but rock legend Carole Pope and I had a wonderful dinner by the pool at the nearby Purple Palm at the Palm Colony Hotel. 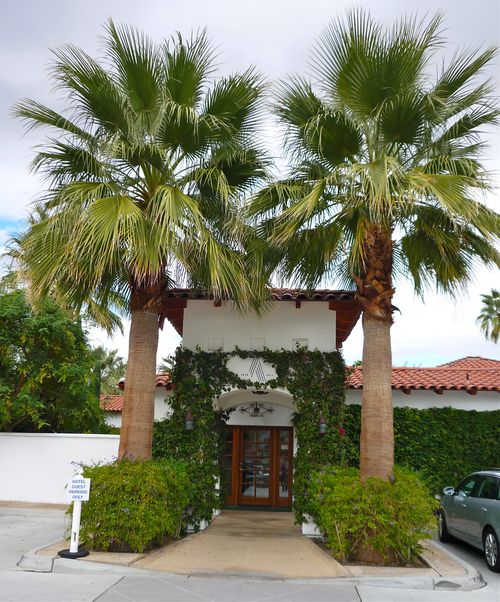 The lush, verdant entrance to the Alcazar. 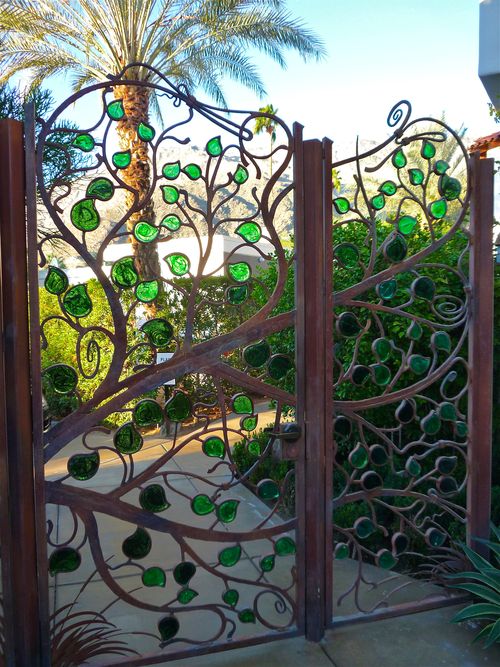 One of the hotel’s beautiful gates. Can you see what a magical place this is? 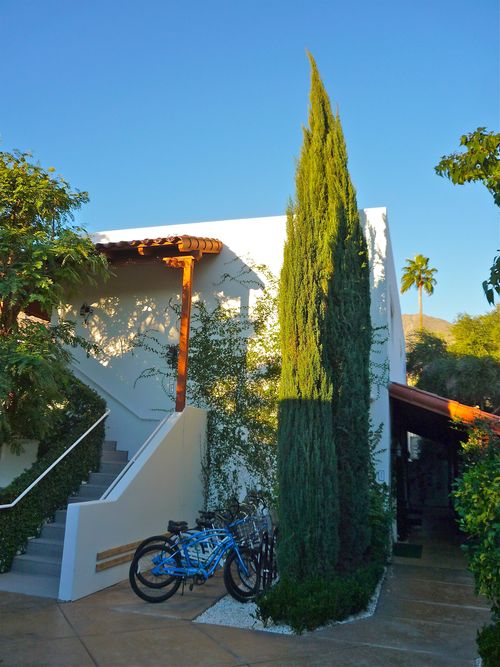 The Alcazar thoughtfully has free bikes on loan. 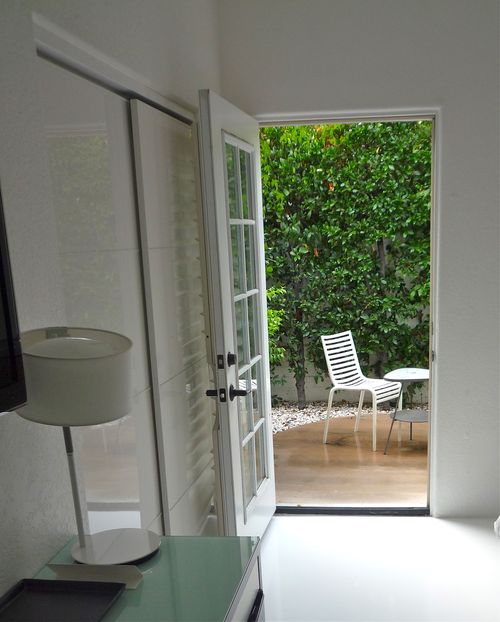 A view of my room’s private garden. I really like that desk lamp! 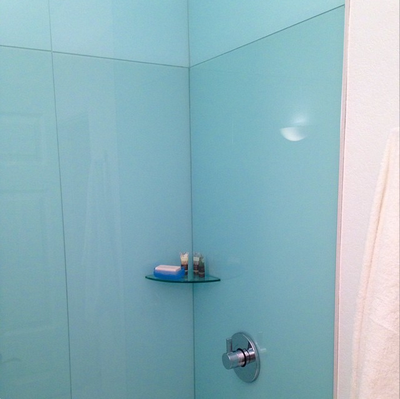 Peaceful blue in the shower. Yes, yes, it does seem close to the famous Tiffany Blue but I was on vacation, so let’s not talk about my work! 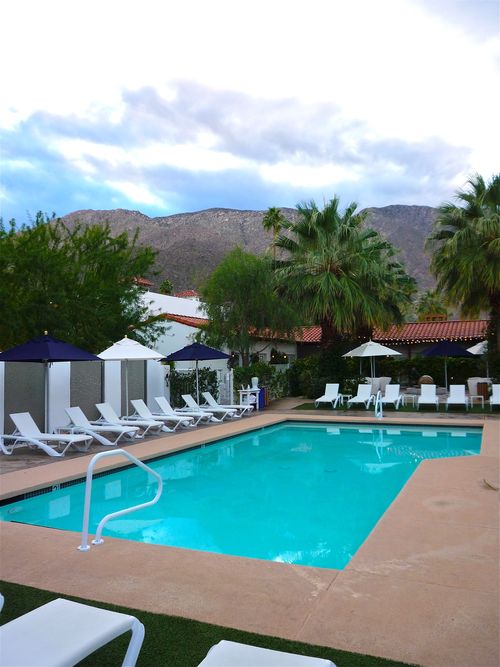 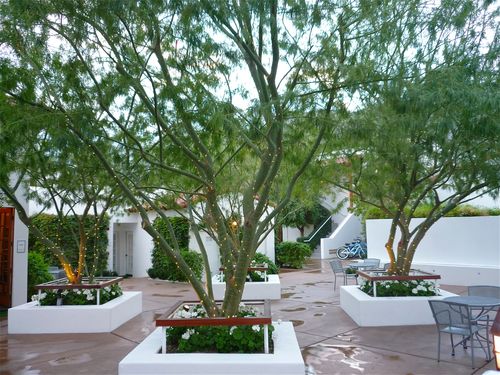 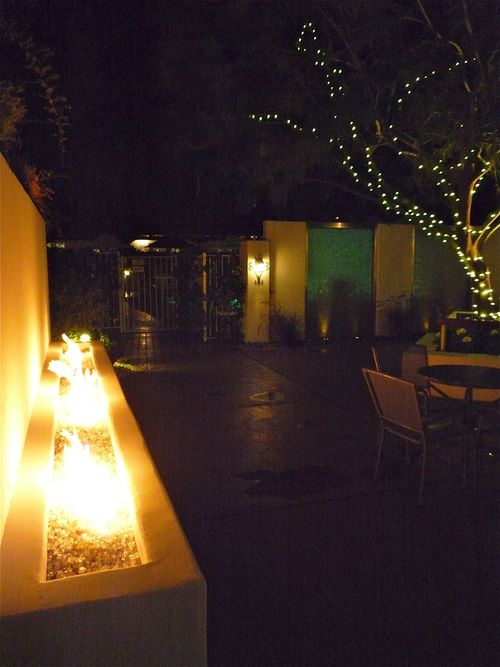 The al fresco fireplace was perfect for those chilly desert nights. 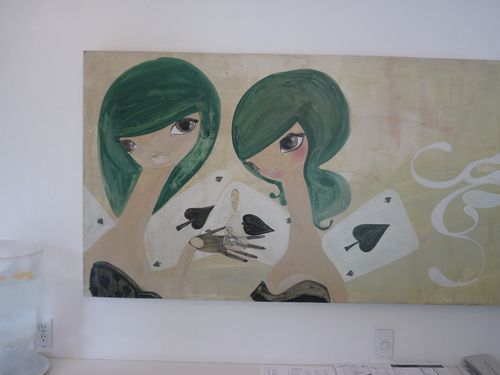 Detail of the lobby painting by Kelly Tunstall. 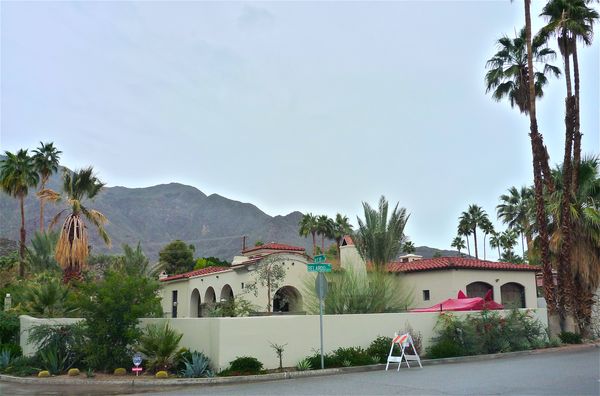 The former Casa de Liberace is just around the corner! Fortunately, or unfortunately depending on your camp DNA, the villa was de-Liberaced after the sequined saint succumbed to the pitfalls of the controversial watermelon diet. 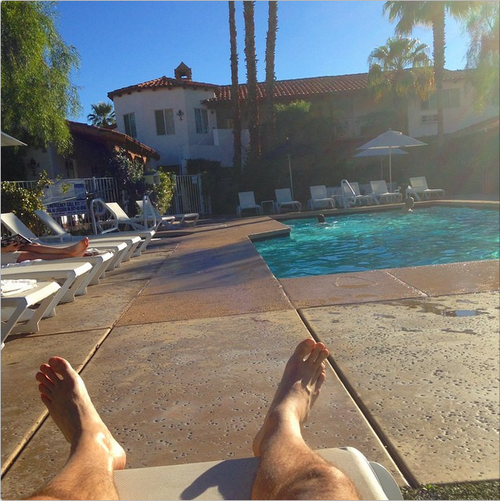 March is an absolutely lovely time to visit Palm Springs, so if you’re stranded in some frigid hellhole like New York, I suggest you book a room at the Alcazar ASAP. Did I mention that the rooms are ridiculously affordable?