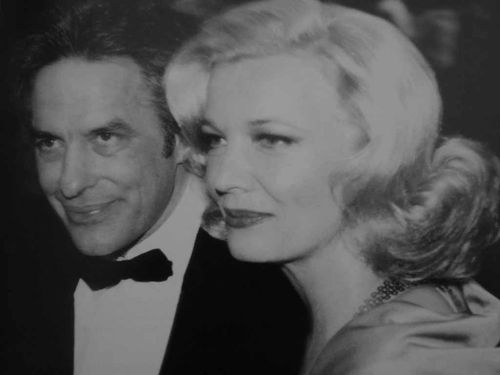 I am sure that someone in your life has opened a door that you never knew existed and even though you never met them, these icons/idols, what ever you want to call them, have none the less left a great impact on your life. I've always been drawn to the cinema and three people that changed my way of viewing film are: John Cassavetes, Gena Rowlands and Rainer Werner Fassbinder .

I know from speaking with their daughter Zoe, how much of an influence Gena Rowlands had on the life and career of John Cassavetes.

A few quotes from John Cassavetes:

"Most people don't know what they want or feel. And for everyone, myself included, It's very difficult to say what you mean when what you mean is painful. The most difficult thing in the world is to reveal yourself, to express what you have to… As an artist, I feel that we must try many things – but above all, we must dare to fail. You must have the courage to be bad – to be willing to risk everything to really express it all."

"If you are interested in films in this country, you want to be a director. It's like in music. You really would like to write your own stuff if you could. I think film and music are very close, since what you are putting down is really more important than just interpreting somebody else's material. But I think now there just isn't enough regard or interest in the beauty of the technical work interrelated with an overall story. I think that everybody learns how to take a camera apart, how to reset it, how to load it, and how to put in your sound sync. But what is the relation, what is the technical responsibility of the cameraman, of the focus-puller, of the various members of the crew making a picture in the overall sense? Directors don't really get along with a crew, because usually a crew isn't involved, unless it's the way you work where you're working with people. I walk in as a director and meet my cameraman to see whether to put shiny walls over there. At what point can I have some kind of rapport with the operator?"

"On Shadows, the whole experience of getting people to do things was incredible. I didn't know what I was doing, really. None of us knew what we were doing. When lighting a scene, we didn't know what we were doing. We even did the music. I asked Charlie Mingus. I said, 'Charlie, would you like to do this?' 'Yeah, what is it?' 'A film.' Charlie said he'd do it for nothing. He worked six months on the music and he wrote a minuteand a half's worth of music. I don' tknow that that's wrong. He said, 'Listen, man, would you do me a favor? You have got to do something for me.' 'Sure, sure,' I say. 'Listen, I've got all these cats that are shitting all over the floor. Can you have a cople of your people come up and clean the cat shit? I can't work; they shit all over my music.' Se went up with the scrubbing brushes and cleaned up the thing. Now he says, 'I can't work in this place. It's so clean. I've got to wait for the cats to shit.' Finally we get it together to record. So, double session, three hours, double session with the projectionist sitting there and I'm watching. He's got fourteen seconds' worth of music. Everybody's saying, 'Why don't you just tell Charlie to improvise?' All the advice then starts. So then he's got to improvise and he loves to sing and he started to sing and he played. He made everyone switch their instruments. So I said to Charlie, 'Charlie, Charlie, it was great; it really sounded great. Everything sounds great. The noise comes out; it really sounds great. It's perfect for the picture.' He says, 'Man, I got to work six more months.' He went away."

"I have the confidence that I can take anybody and have them give a good performance, because I don't think there's anything to acting except expressing, being able to converse. The mistakes that you make in your own life, in your own personality, are assets on the film. So if I can just convince somebody not to clean themselves up, and not to be someone that they're not, and just be what they are in given circumstances, that's all that acting is to me, and I don't think it's very difficult. Only when the lines go against you, it's impossible for you to say them. Or that the character's inconsistent. Or that it's an impossible circumstance where everyone's so hostile that you don't feel like acting."

Gena Rowlands: I am sure that she made more profound statements than these, I just did not find them.

"People in independent film have a passion, they're not in it for the money."

"[on John Cassavetes] We had a great deal of freedom when John acted. We traveled a lot and it was fun. But with directing … really. I think people don't have all their marbles who prefer directing to acting because you write for three months, you cut for maybe six months. He's the most terrifying perfectionist about what he wants. As an artist, I love him. As a husband, I hate him." 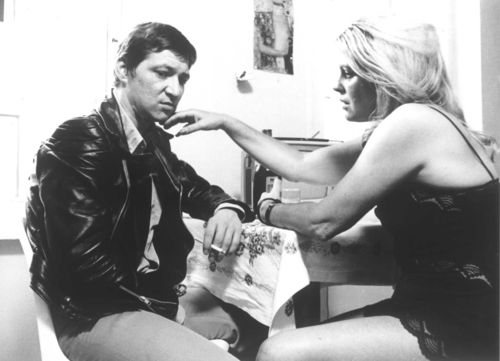 Rainer Werner Fassbinder.
I had dreamed of meeting Fassbinder with the desire to work with him on his films as a costume designer, alas that never happened, he died in 1982 at the age of 37.   I did work with one of his fetish actresses, Hanna Schygulla, I created her costumes for the beginning and end of the film Golem l'Esprit d'Exile and had a tea earlier this year with another, Ingrid Caven. That is as far as I got though. Fassbinder made 35 feature films in 13 years…..just shy by two of saying 37 films for 37 years of life.
A few of his quotes: