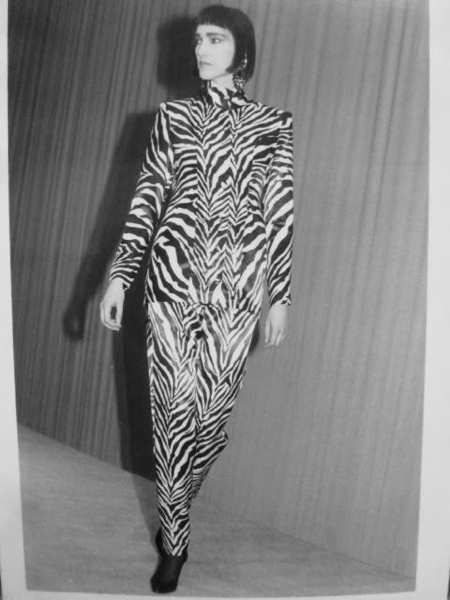 Just found this on the web today, ancient history but I remember it well. Dovanna was always my tallest model, made me feel a bit height challenged when standing next to her but I adored using her in my shows. This was a funny show held in NYC, other models were Lovey Marino, Edwidge and this is the show where I almost killed Suzanne Von Aichinger for waving at her sister at the end of my show. It was one of her first catwalks…before her long and very successful career. The location was also a bit strange, I think it was run by the Moonies. I also remember that my show producer must have been on cocaine because the 14 minute show ended up 7 minutes and was driving my DJ, Anita Sarko, crazy with the constant need for transistions. Currently a film Director, Alan Brown, at the time a student in my Japanese class, was the assistant to the show producer, not the best first fashion experience,  was put into a state of stress with the need to keep sending the girls out much before our rehersed timing.  Needless to say, I never worked with that show producer again and don't think I ever said two words to her again, that is after telling her what I thought about her professionalism.  Could not believe that her experience included producing shows for Miyake in the 80's. Somehow her coke problem and  the world of Miyake do not seem to inhabit the same planet.