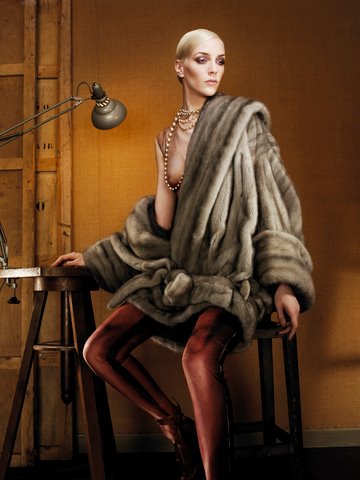 Hannelore shot for a Gaultier campaign by Jean-Baptiste Mondino

Talking to Hannelore Knuts the day before the opening of her UltraMegaLore show at the Modemuseum in Hasselt -which I will review very soon- was a real treat. Unaffected, unpretentious and unbiased are three words that could sum up the Belgian model's attitude to work and life in general. Despite having worked with some of the best designers and photographers around while enjoying a long-lasting career in a transient industry, Hannelore is down to earth, pragmatic and always surprised by what's happening to her. I guess that being back in your hometown and celebrated as a fashion icon in a museum must be uncanny, but Hannelore clearly has the experience and maturity not to believe her own hype. As we sat next to the entrance of the show -and despite her towering heels and gorgeous white snakeskin Ala