Above: The path from the door of my Yin Suite at The Orchid

When visiting Beijing, one can’t do much better than staying at the Orchid, a refurbished and re-imagined courtyard house, once run-down and now an impeccable boutique hotel that opened in April. Located in the heart of Dongcheng District’s historic hutong area, the Orchid is not far from the ancient Bell and Drum Towers and is bursting with intimate charm, warmth and character. It’s the opposite of the Opposite House, the coldly trendy emerald-glassed hotel in Beijing’s luxe Sanlitun district, which is surrounded by Balenciaga, Lanvin and a mammoth Apple store. You could be in any world-city shopping district and where’s the inspiration in that? (To be fair, the Opposite House is gorgeously designed, serves exquisite food at its restaurant Bei, and has a cocktail lounge, Mesh, where you’ll ALWAYS run into international tastemakers who are worth knowing. Blixa Bargeld was staying at the Opposite House recently, for example.)

But one can’t relax (or stay within budget) amidst such hurly burly. The Orchid is tucked away down a very narrow alley off Baochao Hutong where local color abounds: longtime residents riding bicycles (many of which are hauling clanky metal wagons down the gloriously dusty street), children doing their homework at desks in front of produce shops, badminton players, construction workers, elder sages, and a parade of wildly eclectic style statements that will quickly make you forget all Mao suit cliches. (As most of the people in the ‘hood are of humble means, their ensembles are assembled from a vast array of family hand-me-downs. I’m told there is even a blog devoted to this hutong street style called “Accidental Chinese Hipsters.”) 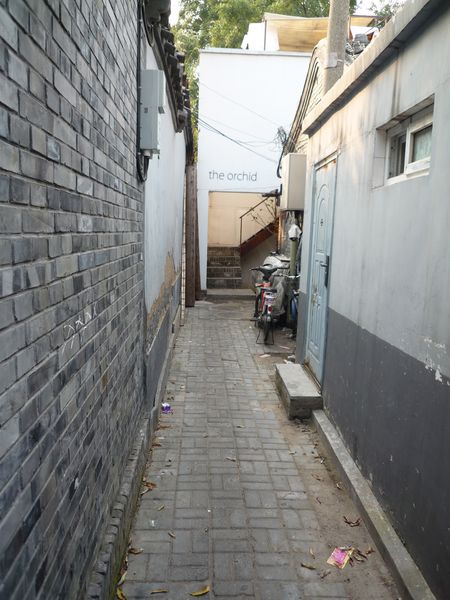 Above: The narrow alley leading to the Orchid. It’s usually filled with garlic peelers and chili-paste pourers from a nearby restaurant during the day, whom you have to navigate around, which is all part of the fun.

My mid-day arrival at the Orchid, or rather my journey up Baochao Hutong, was like a Chinese version of “It’s a Mad, Mad, Mad, Mad, Mad, Mad World.” Most cab drivers don’t like to drive up Baochao Hutong so they’ll drop you off on the main Gulou Road. After I was deposited at the intersection with my wide-load suitcase and my Jeremy Scott for Longchamp duffle bag, I made my way up Baochao which was chaotic almost beyond description. Here I was trying to roll my giant suitcase through a jampacked pandemonium of cars, rickshaws, motorcycles, bicycles, metal wagons, blaring horns, pedestrians and Pekingnese puppies. I felt like Vera Charles being summoned to a madcap Oriental adventure by her frenemy Mame Dennis. (When I finally got to the end of all this madness, I looked back down the end of the street and realized that the traffic jam was being caused by a duo of road-hogging black Audis–the official cars of the Chinese Communist Party.)

So now it must be said that during my 2-week stay at the Orchid, I NEVER saw the street in such a crazy state again. It was as if the whole thing had been specially arranged and orchestrated for my arrival. True, on most days we were dodging some speeding bikes and rickshaws during our strolls, but it was never on the level of that first day. 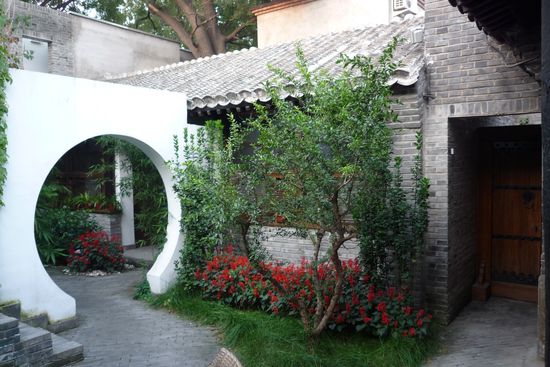 The Orchid was designed by Beijing-based, Hong Kong-born architect Wong Siu Ming who told the Wall Street Journal, “the design is like the concept of a village, where tradition and modern-day life intersect, and where people live in close quarters but have lives of their own at the same time.” The pre-existing courtyard buildings kept the foundation and the wooden structure, and their ceilings were renovated using 300-year-old tiles from Chengde, in Hebei province. One of the rooms I stayed in (I tried out three of them) had a very high ceiling, that followed the peak of the roof, with thick wooden beams and an indoor garden with a skylight. A courtyard room I stayed in was split duplex-style, with a loft bed and a glamorous high-ceilinged bathroom with ebony-stone walls in the extra-wide shower. 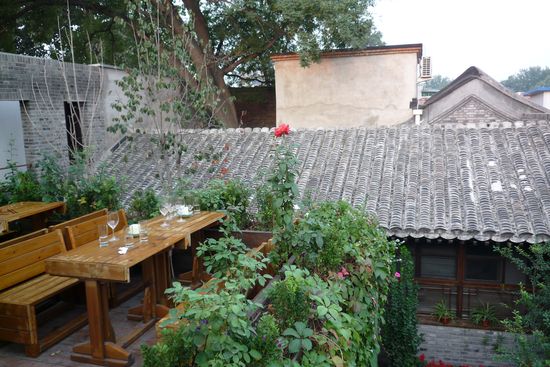 There are three floors of patios. This one, on the second floor, was where we had breakfast every morning (which was delicious, and included) and the roof patio is a lovely place to enjoy some of the hotel’s well-chosen Italian, Australian and South African wines with friends. (My pal Alice stopped by one night after our Chinese dirt-wine ordeal at the China Millennium Monument.) 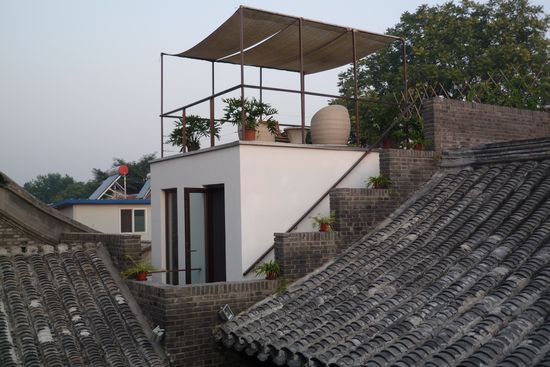 View of the Yang Suite which boasts a rooftop patio that’s exclusive to the room–perfect for showboating couples who like putting themselves on display. (Because I’m the unostentatious type, I was happy with my 6-night stay in the Yin Suite, which is discreet and features a large, private garden.) 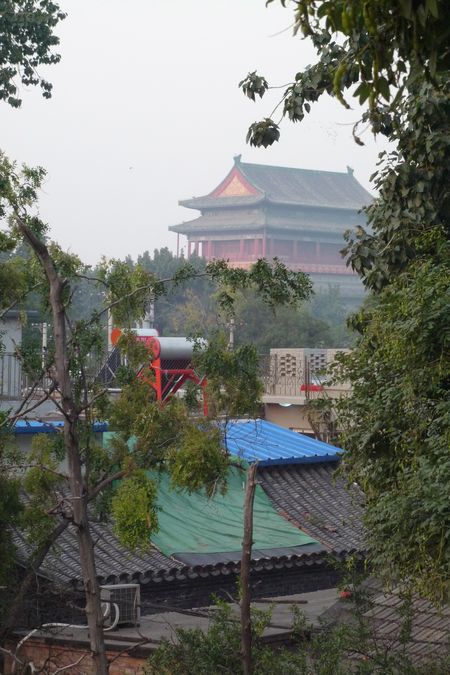 The rooftop patio has a gorgeous view of the Drum Tower and old courtyard house roofs. I really enjoyed sitting up here while working on my laptop or reading. 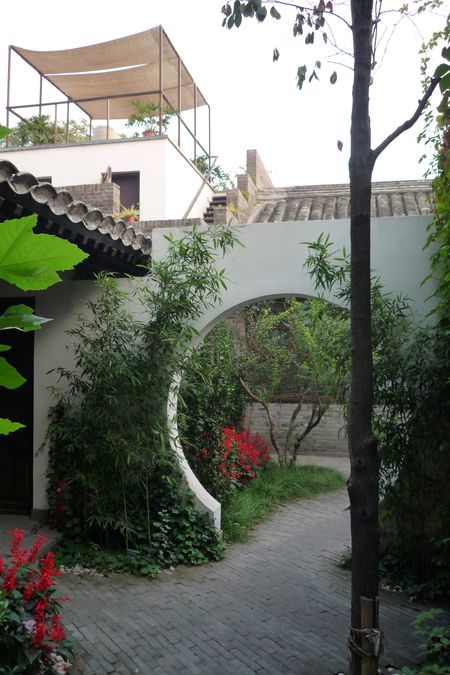 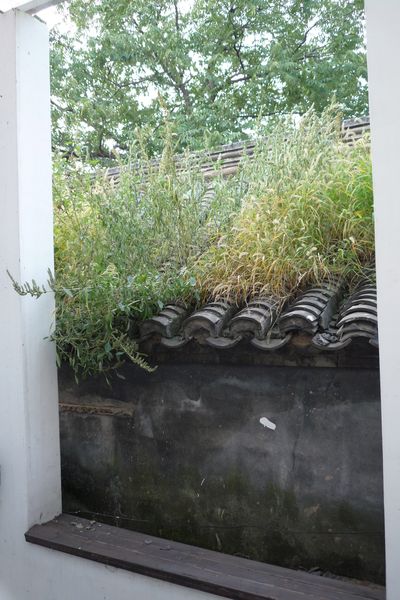 Windows in the modern new walls of the entrance were strategically cut to reveal lovely details of the ancient neighboring houses. 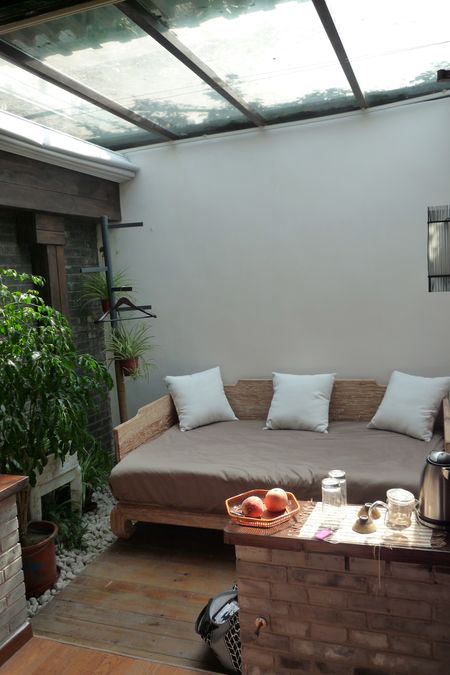 The indoor garden area, with skylight and day bed, in one of the rooms I stayed in. 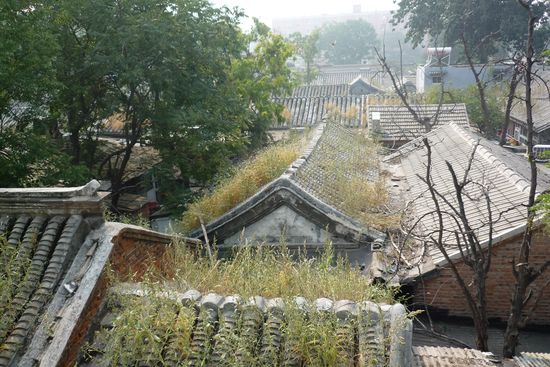 I was living for this view of the overgrown roofs. One morning I saw a ferret-like creature scurry across the ancient tiles. Joel Shuchat, one of the Orchid’s founders, told me it was a Siberian weasel. (We won’t even get into the story of my late night when I was lost and was chased down a very dark hutong by one of these critters.) 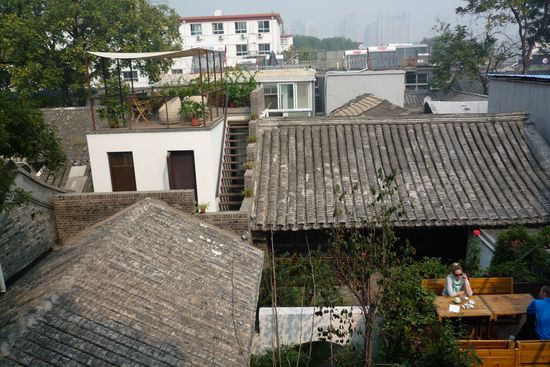 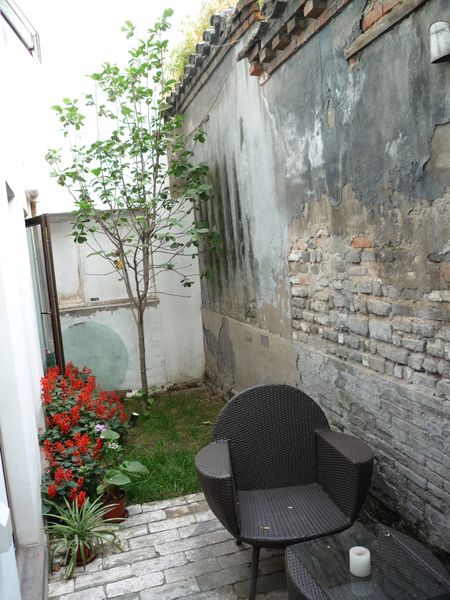 My private garden next to the Yin Suite. 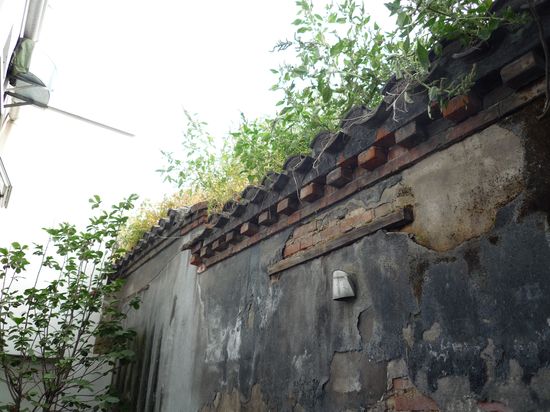 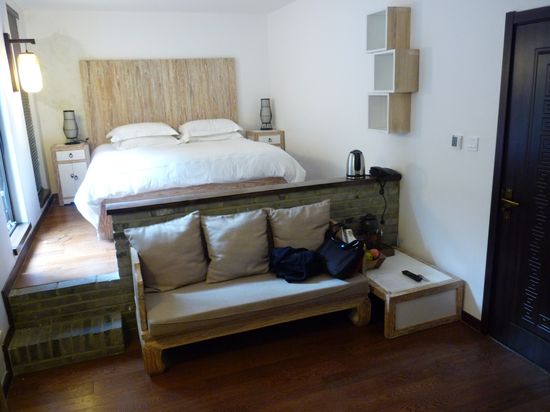 View of the Yin Suite. 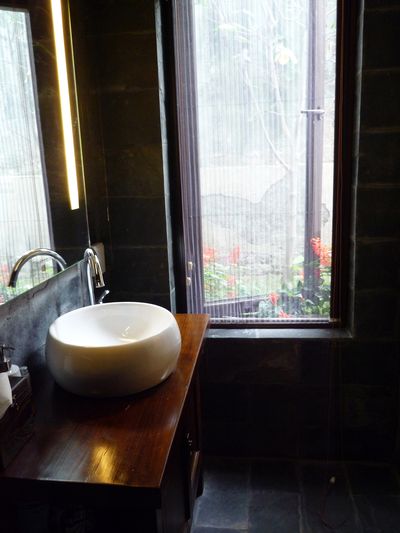 The Yin Suite’s bathroom had beautiful slate walls and floor and a window that looked out into the private garden. 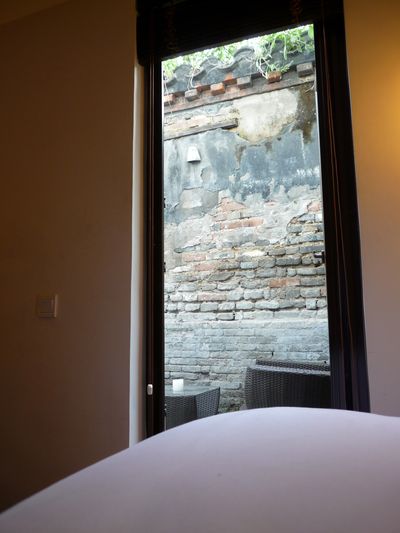 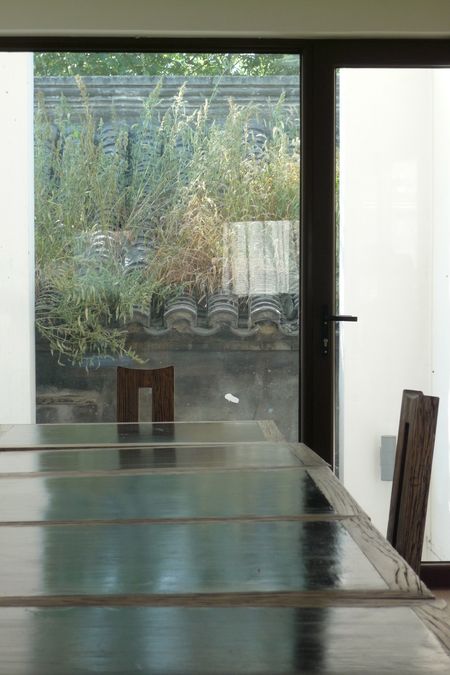 There were a few chilly mornings when we retired to the inside dining room for breakfast.

My friend Nancy stayed in The Lookout, a 2nd-floor room with loads of sunlight and this view of the Bell Tower. 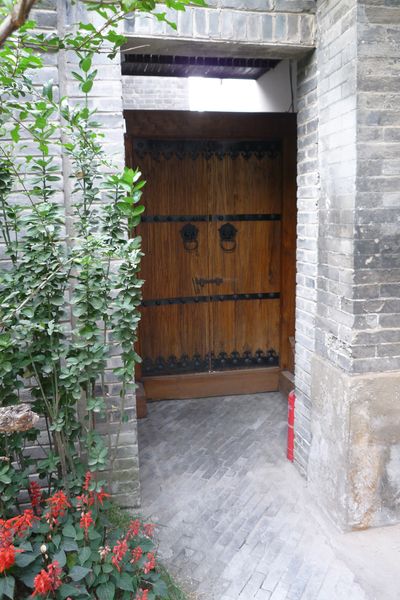 Nancy also stayed a few nights in one of the garden rooms. When I wanted to knock on her door in the morning, I had to use a Mongol-invader battering ram. 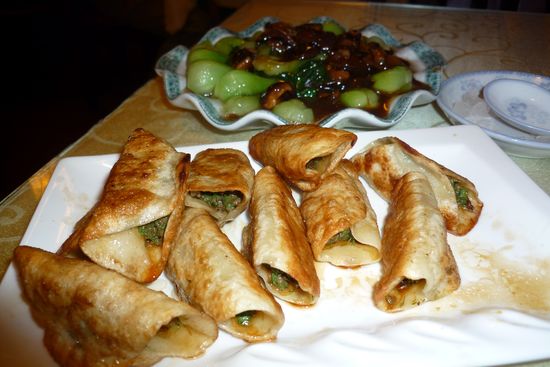 Right across the street from the Orchid is the justly famous Mr. Shi’s Dumplings. Never in my life have I eaten Chinese dumplings that used fresh fennel as an ingredient, so these fried dumplings with pork and fennel were a surprise treat. The best thing about them is that the filling is mostly fennel, so they’re bursting with fresh flavor. Joel will order in food from Mr. Shi’s to the Orchid if you don’t feel like going out and one night, when Nancy and I were exhausted, we dined on the super-yummy lamb and fennel boiled dumplings in the hotel’s courtyard.

Another excellent restaurant on Baochao Hutong is Dali Ren Jia which serves authentic Yunnan food, my new favorite Chinese cuisine. The dish I love the most is the cold beef with mint, lime and hot chili peppers. (There are many Yunnan restaurants in Beijing and I tried out three of them on this trip. Nothing quite compares to the experience of dining at the Yunnan Provinicial Government Restaurant, located in a run-down 1950’s Soviet-era hotel in central Beijing, which my friend Jeffrey Ying took me to.) Yunnan, for those who don’t know, is the Chinese province that borders Vietnam. 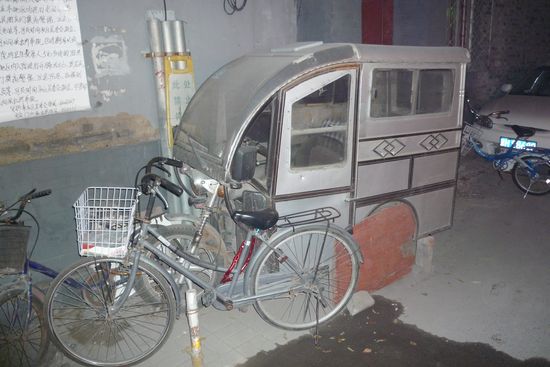 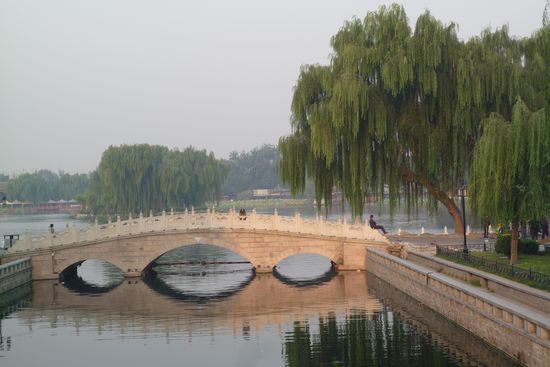 …to serene parks during a stroll from the Drum Tower down the central axis.

My morning in Jingshan Park 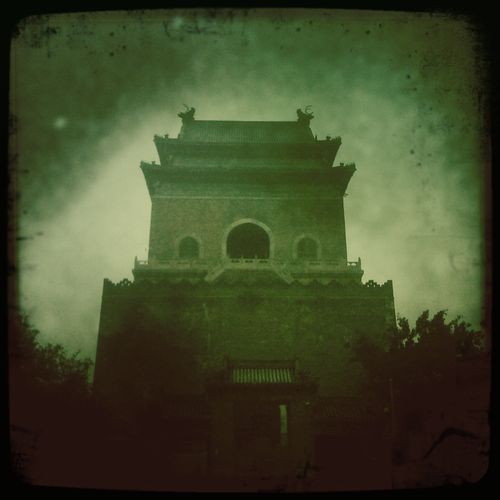